Another stage where Froome is likely to pad his lead, but this hilly time trial ought to shake up the top ten a fair bit. 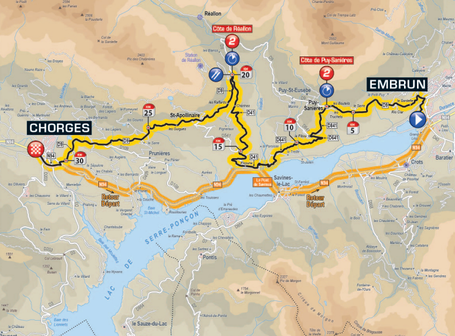 This Tour's bent for climbers touches the time trials a bit as we hit the second contre de montre of the race. It's a lumpy one with two climbs in the 6-7km range that average about 6%, though they look like they have some steeper ramps in them. That makes the climbing over a third of the entire distance of the course, and it starts right from the gun. Ouch. You will see guys on the trainer a loooong time for tomorrow's warmup.

Will this shake the GC standings as much as the last time trial, where Froome put two minutes or more into everyone in the top ten except Michal Kwiatkowski? My gut says yes, but more for the minor placings. Seriously, if someone high on the GC beats Froome on this course tomorrow, it will be because he had mechanicals on par with Michael Rasmussen's infamous time trial in the years of yore. That said, replacing windy tidal flats with good sized hills means riders like Contador, Quintana, and Mollema should not lose as much time as last time. Look for Froome to pad his lead by about a minute while the fight for the podium spots gets messy.

Richie Porte. Sky might tell him to sit on it and save himself for the craziness to come, but if let off the leash, this time trial should suit him more than the last... where he finished a lowly fourth. I would pick Rui Costa, but he went and made himself nice and tired today...