She is so famous that we can call her "l'Alpe or the Alpe" without causing confusion. Stage 18 of the 2013 Tour de France will climb the legendary hairpins of Alpe d'Huez, not once, but twice.

Alpe d'Huez made its first Tour appearance in 1952, almost a half century after the first Grande Boucle -- but was still the very first Mountain-Top finish in Tour history. At the time, the stage was seen as a disappointment, as Il Campionissimo Fausto Coppi easily won the 266 km stage that had started in far away Switzerland.

It would be 24 years until l'Alpe was climbed again, in 1976. But for the balance of the 20th century, Alpe d'Huez featured in all but five Tours. Thursday will be the 28th visit here.

From the floor of the valley far below the cyclists will have to conquer twenty-one hairpins to reach the ski-station high above. The hairpins are all signed starting with #21 at the bottom and #1 just below the village. Each of the 27 stage winners have their name posted on one of the hairpin signs.

Fausto Coppi won the first Alpe d'Huez Tour stage in 1952. With 27 winners and only 21 hairpins, some champions have to share a sign. In 2002, Lance Armstrong was the 22nd winner atop Alpe d'Huez. So Fausto and Lance are the first names that amateur cyclists read while gasping up the first super steep ramp relieved to finally reach a hairpin. 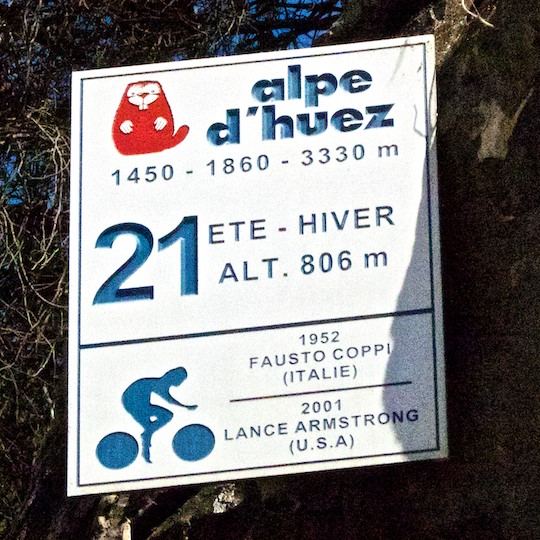 Let's take a voyage through history and see how many of the other twenty-five Alpe d'Huez stage winners you can identify:

1976 - This Dutch rider won three Tour stages this year, finishing second overall. He would win the 1980 Tour de France and go on to be a Director Sportif at Superconfex which became Rabobank.

2004 - This Spanish rider recorded perhaps his biggest victory winning Stage 8 atop l'Alpe, finishing 6th in the GC that year. He would win the 2004 Dauphiné while recording the fastest time ever recorded climbing Ventoux. The record still stands.

1977 - Alpe d'Huez is sometimes jokingly called the highest road in the Netherlands due to so many Dutch winners here. This cyclist won the Tour de Suisse the year before and would finish 2nd in the Tour.

2004 - There is much debate abtout the fastest time to climb the Alpe (where to start timing, where the finish is, etc), but this cyclist delivered probably the second fastest ever during the only contre-la-montre here.

1978 - Another Dutch winner. This cyclist won the 1972 Olympic Road Race. In the early '80s he became a one-day specialist winning the Tour of Flanders, Paris-Roubaix, Lombardia, and Milan-San Remo.
2006 - This future Tour de Suisse winner would drop Damien Cunego 1.5 kilometres from the finish to win.
ANSWER CLICK HERE

1978 - This cyclist podiumed twice in the Tour (3rd both times). He would tragically die after hitting a dog near the finish of a stage while leading the Tour of the Algarve in 1984.
2008 - The Alpe was the only stage victory in 2008 for this cyclist on his way to winning the Tour.
ANSWER CLICK HERE

In 1978, the evening after the Alpe d'Huez stage, the yellow jersey holder Belgian Michael Pollentier was thrown out of the Tour after being caught using someone else's urine at the doping control.

1979 - Another Dutch victory. An impressive season would also include winning Paris-Nice and the Vuelta a España.

2011 - The most recent name added to a hairpin sign. this young Frenchman has garnered much attention recently for going full Polka Dot. Nice kit.

1981 - Yet another Dutchman. His name is synonymous with victory. He will have to share his sign with the 2013 stage winner.

"J'ai l'impression d'avoir laissé cinq ans de ma vie dans cette ascencion" -- " I had the impression to have lost five years of my life during this ascent." - 1981 stage winner.

1982 - The only Swiss winner here. The biggest stage victory of his career. He also won two Tour de Suisse titles.

1983 - Another win for the Pay-Bas (low country), The two biggest highlights of this cyclist's career were at l'Alpe (he also won the 1990 Dutch National Road Race champion).

1984 - It was this year that Alpe d'Huez cemented its position as an almost mythical place in cycling. Bernard Hinault would attack over and over again on earlier climbs, reaching Alpe d'Huez in front but completely exhausted. He would drop 4 minutes on the 21 hairpins to eventual GC winner Laurent Fignon. But neither would win the Alpe d'Huez stage.

The stage winner: Talented Colombian climbers are receiving lots of attention this year, but almost 3 decades ago another Colombian knew how to cycle uphill. He was only the second rider to ever win the Mountain Jersey at all three Grand Tours. His victory at Alpe d'Huez was one of three Tour de France stage victories.

1986 - If you're counting hairpins while riding, you'll note that you're halfway there. The stage winner - the Alpe champion I'd most like to have a beer with - would cross the line hand-in-hand with his team leader. It was perhaps the only time the entire 1986 Tour de France when this former winner seemed to get along with his American team-mate.

In his autobiography: "I could have had the American's skin on the Alpe"

1987 - This Spanish climbing specialist posted the biggest result of his career by winning here.

1988 - By now you should be starting to understanding why Alpe d'Huez is considered a Dutch mountain. This cyclist was the last to win the Combination Jersey (GC, points, KOM, intermediate sprints) - the multi-coloured jersey was sadly discontinued after 1989.

1989 - Yet another Dutchie! I need Ted to teach me how to pronounce this rider's mouthful of a name. Nicknamed Blond Angel due to his long flowing hair, he would also win the Polka Dot jersey this year.

1990 - This Swiss-born Italian won two World Championships, several Tour stages, and the Giro - leading from start to finish. He also won Milan-San Remo, and the Tour of Flanders. He is apparently now a helicopter rescue pilot and has previously flown helicopters providing TV coverage at pro races including the Giro.

1991 - This Italian achieved his best Tour finish this year - second. He is currently the President of the CPA (Association of Professional Cyclists).

1992 - Lance isn't the only American to win a stage at Alpe d'Huez. This rider is perhaps most famous for his 1988 ascent/descent of Passo Gavia during a blizzard in the 1988 Giro d'Italia. He also won the 1986 White Jersey (best young rider) at the Tour.

1994 - Despite winning the 1987 Giro d'Italia best young rider award, this Italian would have only one great victory in his career: stage 16, Alpe d'Huez.

1995 - This legendary Italian cyclist is most famous in France for his stage victory at nearby Les Deux Alpes in 1998 leading to his only Tour de France overall victory.

1997 - This rider clocked what is often referred to as the fastest-ever ascent of Alpe d'Huez to win this stage, dropping eventual GC winner Jan Ullrich with 10 kilometres to go. When I was photographing all the hairpin signs, this one was missing!

This Italian famously ran into a German photographer near the finish falling off his bike but recovered to win. At the 5 minute mark in this video.

So how many answers did you get correct? Anyone with 15 or more correct is invited to Will's house for beers. Less than 15 correct, you're still invited, but you must bring the beer.
Feel free to use the comments to share any Alpe d'Huez memories you may have.
Click here for a web gallery showing the 21 hairpin signs (except #2). 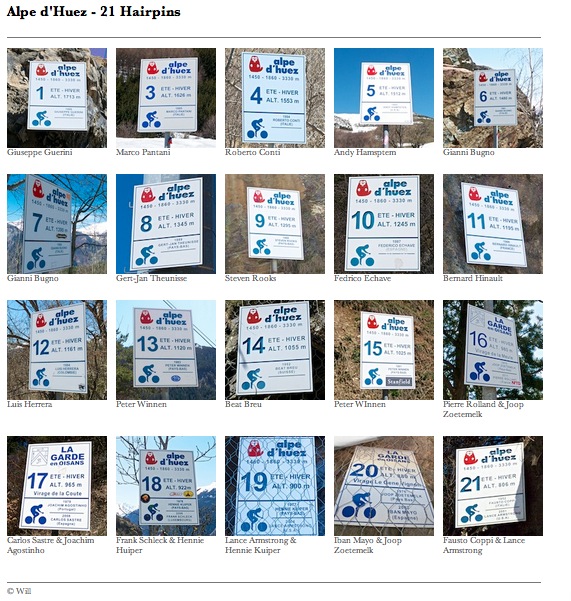