Powers in yellow after fast and technical Prologue

Powers in yellow after Prologue. A hilly Stage 1 should set up the GC.

Share All sharing options for: Powers in yellow after fast and technical Prologue

The BMC Cascade Cycling Classic kicked off with a fast and technical 2.8-miled Prologue around Tetherow Golf Club on Tuesday evening.

Last year's winner, Alison Powers, hopes to win Cascade and she certainly showed it during the Prologue. With a time of 4'53", she took the lead and will be wearing the yellow jersey in tomorrow's stage.

Powers said it felt really good to be out there. "I remembered what I could have done better from last year's Prologue and made it happen," she said. "[The course was] fast, technical and fun." Powers' teammate Lex Albrecht came in fourth, 12 seconds down, putting the team in the lead for the team competition. Powers and her NOW and Novartis team will be racing to defend the yellow tomorrow.

"Before the race, we knew this course would suite Powers well. I just tried to go as fast as I could, knowing that I just finished the Giro d' Italia and not really knowing how I would feel," said Olds. "But the course was very fast and I felt good sprinting for most of it. I am happy with this result. Powers is an incredible rider and I didn't expect anything less from her today."

"Olds said that the real racing starts tomorrow, in Stage 1, and that Tibco has set out to win the GC. "The team goal for this stage race is to try to win. But we are also first in the team ranking for the NRC and it is a goal to keep that ranking."

Team Optum had a good showing with Jade Wilcoxson, Brianna Walla, Denise Ramsden all in the Top 10, putting them in second place of the team competition. They will surely be aggressive in Stage 1.

"That was a great course, I like how they took out the last bit of climbing! It was over before you I knew it and if at any point you let off the gas or braked, you dropped down in placing," said Optum's Lauren Hall. "I'm a little disappointed with my own personal result but very happy to see my teammate-Jade-right back in the thick if things."

While the evening Prologue served more as a warm up for everyone, Stage 1 will be "a whole different ball game," said Hall. "Stage 1 is a long, grueling climb and a long day period. The GC will start to sort out for sure." 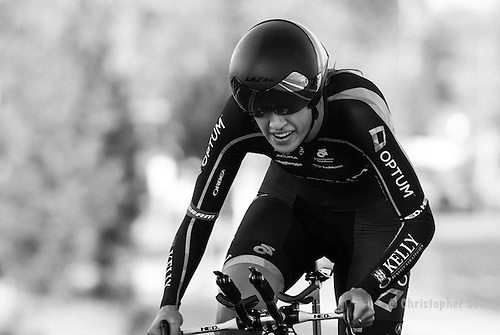 "I had a rough start out the gate and sprinted like mad for the first bit to make up some time so a little bummed but overall happy," she said. "Tomorrow will be interesting - we will race aggressive no doubt. we've got some amazing climbers in the peloton- the usual suspects (Hauesler, Abbott) to monitor but could see some surprises."

Jessica Cutler is leading the Vanderkitten's eight-woman squad by coming in 14th yesterday.

"It was so dry that within the first 2k I felt like someone had taken a bench grinder to the back of my throat. I still sound like a 80 year-old smoker," she said after the race. "[But]I am happy with my result. I wasn't expecting a whole lot from myself and although I would have been happier with a top 10 I think 14th is pretty good. It's easy in a Prologue to rethink your race when two seconds can mean a difference of five places. At the end of the day, in a race like Cascade, the GC can get totally turned on its head in one day."

With several riders within 30 seconds of the yellow jersey and some even closer to young rider jersey, Cutler said Vanderkitten has several cards to play going into the first stage as well as the rest of the race. Race favorite, Mara Abbott [Exergy Twenty 16], is trailing 46 seconds behind Powers, after finishing 75th in the Prologue. Look for her to make up the difference on the climbs in Stage 1. Tibco is sitting in third for the team competition and their rider, Jasmin Glaesser, will be wearing the young rider jersey after coming in 19th in the Prologue. Stage 1, the 74-mile McKenzie Pass Road Race starts and ends at sno parks in the Willamette and Deschutes National Forests. This, of course, can mean only one thing: elevation.

The most significant climb start about 30 miles in and lasts for about 20 miles. After some descending, the course goes right back up for an uphill finish. And with time bonuses and sprint and KOM points to be had, Stage 1 should be interesting!