The Alpes are here, and in spectacular fashion with the Tour's first ever double ascent of the Alpe d'Huez. Craziness will ensue. 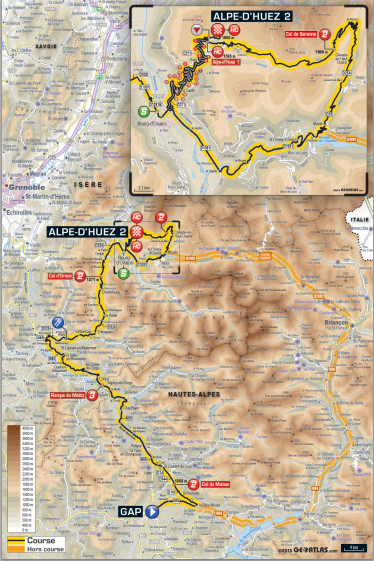 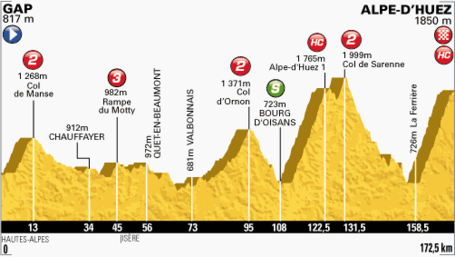 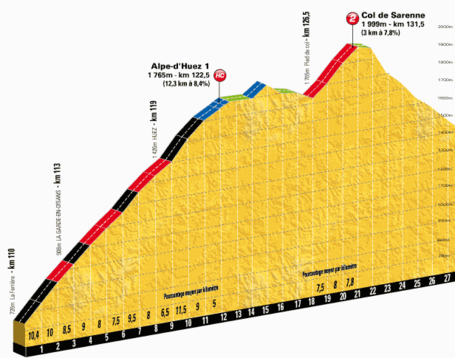 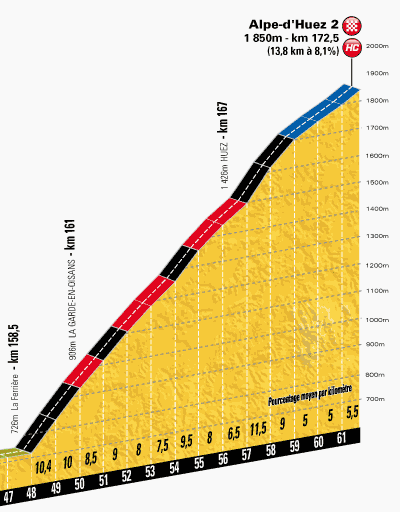 I almost can't believe it when I hear it, still. Stage 18 will climb the mythical Alpe d'Huez not once but twice, a feat never before done in the Tour's long relationship with the Alpe. But this is the 100th running of the Tour and it must be dramatic, memorable, touching the climbs of the Tour which are most ingrained in our collective memory as much as possible. So, we get a double dose of those 21 revered hairpins. And the fans on the roadside? Well, there will be a lot of people blackout drunk by the time the stage finishes if I know fans on the Alpe...

Aside from the historical significance of the Alpe - it was the first mountaintop finish of the Tour way back in 1952 - and of climbing it twice, there are more reasons this has been possibly the most anticipated stage of this year's Tour. The Alpe is a beast of a climb, ascending for more than 12 kilometers at an average gradient of over 8% to give it a rating of hors categorie. The middle of the climb bites hard with several kilometers between 9% and 12%. After the first ascent of the Alpe, riders have the briefest of breathers before climbing three kilometers more to top the Col de la Sarenne. This is where the race gets, well, interesting.

The descent of the Sarenne has garnered much attention from the press and riders over the past months. It is serpentine and narrow, the road dropping off precariously to the right with no guardrails. Though the road has been resurfaced and is no longer plagued by minefields of potholes and lumpy patch jobs, it is a challenge in and of itself. Before the Tour, Tony Martin said the inclusion of the descent was madness, a sentiment recently echoed by the political party Europe Écologie des Verts (though that must largely be a publicity stunt by the small left-wing party).

Not everybody will be ruing the descent, though. Alberto Contador showed on yesterday's stage into Gap that he is not afraid to attack on tricky descents, and neither is Nairo Quintana. Those two, along with Roman Kreuziger, are sure to put pressure on race leader Chris Froome early, including using the Sarenne as a launchpad to pry open a gap before the treacherous descent. The difference between Froome and Contador in the tricky descents of today's time trial was clearly visible, especially when French tv producers were so nice as to give us side by side pictures of the two riders navigating the same turns minutes apart. If Froome does not have a wheel to follow, he may be vulnerable on the descent, especially since his main lieutenant Richie Porte is no demon descender either. Should they materialize, the storms predicted for tomorrow afternoon will only make things more treacherous.

Do you want a fun descending factoid? Of course you do. Roman Kreuziger, Contador's teammate who is sitting in third on the overall classification right now, had the third fastest time down the most technical descent in today's time trial, and was notably faster than all the other general classification contenders.

Even if the descent of the Sarenne is muted, there is still the final 13.8km climb of the Alpe to contend with. Fireworks will explode all up and down the slopes of the climb, rest assured of that fact.

For more facts on the Alpe's storied history, we have an excellent history lesson for you to enjoy.

Alberto Contador. Today's TT showed his legs are coming good just as we hit the hardest stage of the race. Plus, with four plus minutes to make up on Froome, he has to go big and risk losing his podium spot or go home, and I personally think he can pull off whatever long range attack he chooses. Bonus prediction - I bet he gets Alejandro Valverde for company.