The second to last day in the Alpes, and opportunities to take time out of Chris Froome and other podium hopefuls are dwindling. With only a short descent to the finish, we might see some fiery racing on the Col de la Croix Fry. 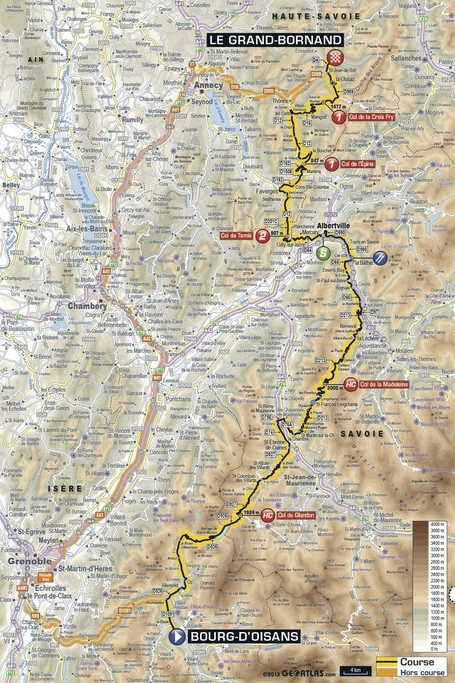 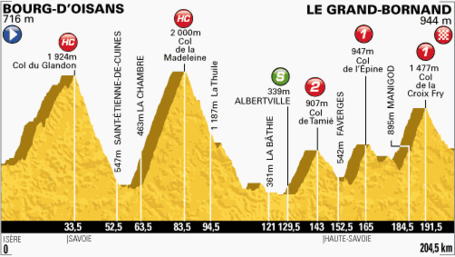 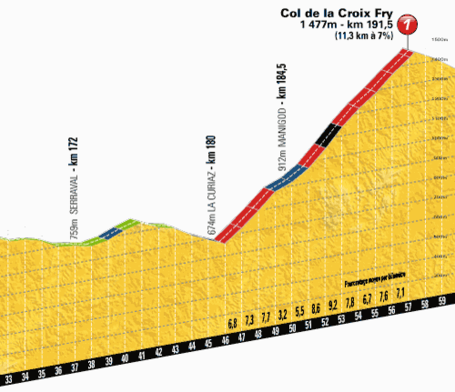 That's a lot of climbs right there. Starting off with two hors categorie climbs seems rather cruel, though they will do no more than add fatigue to every rider's legs and provide a breakaway a chance to force itself clear of the peloton. With the lumpy parcours and no mountaintop finish, it seems a good day for a break to stick, especially if the peloton and its collective tired legs decide to take it easy up the first two climbs. There are boatloads of mountains points on the line, maybe enough to entice Pierre Rolland into redoubling his search for garish polka dotted shorts?

As we get closer to Le Grand-Bornand, the climbs get smaller and the gradients remain moderate, in the 6-7% range. with occasional skirmishes towards 9%. Nothing too hard, really, and the final climb is not much worse. The road is wide and the grade steady. Though these alpine climbs are picturesque, they are rarely the ones that deliver a firm kick to the nether regions like the Pyrenées are wont to do. Instead, they are the kind that wear down on you all day long.

Though this climb is steeper than the Col de Manse - the final climb on Tuesday's lumpy stage to Gap - I expect similar racing to take place, probing for a weakness in Chris Froome that is not evident on the climbs. Alberto Contador and Roman Kreuziger, along with Nairo Quintana, will try to wear down Sky before the final climb begins, then come out guns blazing on the final ascent in hopes of opening a gap before the descent. But, given the harder nature of the climb, the attacks will probably come with a little more gusto. Draft won't be as important here as the Col de Manse, which rises at a more sedate 5%.

The descent is a wide, smooth road and not as technical as descending the opposite side would be. There are enough twists and turns and hairpins to keep riders on their toes, but this is no Col de Sarenne descent, nor is it as tough as descent of the Col de Glandon earlier in the stage. It should inspire some aggressive racing, but I wouldn't expect any huge gaps to form down the descent.

Bonus? The last 500m kick up rather unexpectedly. This could be a fun small group sprint to watch if a break - or small group of contenders - hits the line together.

Also, Will has a great in-depth look at tomorrow's climbs. You should totally go take a look at it.

Thomas Voeckler. It's almost hard to believe he hasn't won a stage this year, isn't it?