Techs-Mechs: Boreas Chills Out Amid the Pack Wars

Summer means, among other things, that everything touching your back makes life stickier. Solution? Get that pack off your back!

Share All sharing options for: Techs-Mechs: Boreas Chills Out Amid the Pack Wars

Let's face it, deciding as a cyclist "where to put your stuff" is about as simple as buying drapes. Ever walk into a fabric store? I have, and if I had any choice, I did a quick U-turn... not because I hate fabric or drapes but because the choices are overwhelming. So too are the array of pack choices. Format? There's saddlebags for small stuff and panniers for the bigger things. For commuters, the choice might be shoulder bag or regular backpack. Debating the pros and cons of each is a good way to waste a few hours of your life. And by good I mean not especially good.

Personally, I've always just put stuff on my back. If I had one bike and were arming myself for hauling lots of gear, I might go for the false comfort of putting the weight on my bike instead of my body ("if I'm not holding it, it doesn't affect my power-to-weight ratio!"). But with multiple bikes and a commuter lifestyle, plus the odd race, fixing anything to a frame is out of the question. So it's long been shoulder bags for me, largely for the cyclist identity (hey, it was a big deal back in the 80s), and partly because, well, they have their merits.

But after several decades of having the option of using backpacks designed for people on foot (as opposed to employing the back/neck angle of a cyclist), traditional two-shoulder suspension harness packs have moved into the cycling world, with packs that don't weigh a lot or wedge themselves under the back of your helmet. Boreas, a newcomer since 2010, has taken the concept one further... by actually getting the thing off your back entirely. 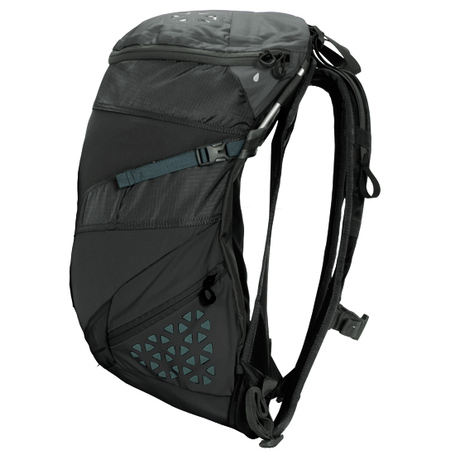 OK, that's not literally possible, but the effort is impressive. The Boreas Lagunitas, one of several models using their "super-tramp" suspension (dear god please don't start a song in my head right now), literally lifts the nylon pack away from your back. The suspension is a stiff frame with thin steel rods running vertically, which you can bend into an arch shape, shown above, by tugging on a strap at the top of the pack. Loosen the strap and the pack straightens into its normal form-fitting shape.

For biking, I can tell you that this works even better than you'd think. Sure, there's still some mesh touching your body, but opening that gap with anything resembling a full pack, as I did today in the middle of a rare heat wave, allows the pack to catch some air and direct it into the newly-opened space. If you want a hiking model that doesn't heat up your back, you might be better off with other Boreas packs like the Larkin, which uses a perforated foam panel to pump air into that space as the pack bounces up and down. [Though I also tried out the Lagunitas at Mount Rainier last month, and it functioned quite nicely as a standard day pack.] But on the bike, that 15-20mph self-generated airflow is impossible to not notice. It's like having a fan blowing on your sacrospinialis.

Whether you appreciate it or not is another matter. For me in Seattle, nine months out of the year I'd focus more on comfort than staying cool. But in the midst of our annual 90-degrees week, I am loving the coolness. Also, I did the better part of a decade biking to work in Washington, DC, where anything touching your skin will generate a puddle of sweat between May 1 and October 15. If I'd had the Boreas Lagunitas back then, I'd have worn that thing out, then bought another one.

A couple other features worth mentioning are the use of internal nylon straps across the girth of the pack for handling heavy loads, and the various strategies for warding off moisture, including silicon coating on the inside and some strap-closing slip-pockets up against the back for safe- and dry-keeping of small valuables -- more functional than your average mini-pocket. The Lagunitas is also a top-loading pack with a map-pocket in the lid, which as the guy who is constantly pulling out the map, I truly appreciate. [OK, I admit it. I have a problem with maps.]

Criticisms are few. The waist strap is your basic nylon strap, no padding, which works well if you have the waistline of a professional cyclist, but can be annoying. I for one am quite annoyed at not having the waistline of a pro cyclist. But I did forget about the waist strap after about 30 seconds, so while they could do better, it's not a major issue. The only other point would be fit. It's not easy getting a pack in exactly the right place for biking in the drops, without some part of the pack creeping up under the back of your helmet. I managed fine with some adjustment, but unlike some biker packs there's a metal frame in there, so if you have a short torso, make sure you can fit it low enough to steer clear of your neck.

Boreas are a new company, started in San Francisco in 2010, and worth checking out.