After leaving Corsica behind, the Tour still keeps the theme of hills before a possible sprint. It looks like a day for a heartier version of sprinter. 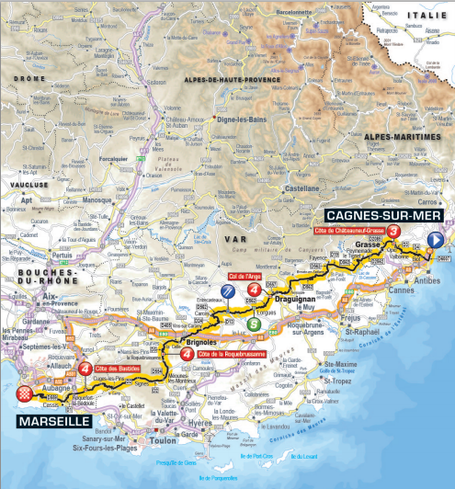 Still, with the Giro stages... Wednesday's stage is flat enough to allow a bunch sprint, but with short climbs a plenty in the final 70 kilometers, things might not be so simple as that. The final categorized climb - the Côte de Bastides - is 5.7 kilometers long but only has an average gradient of 3.1%. Will that easy slope hide some nastier gradients in the middle? Maybe. After the descent of the Bastides, the racers will ascend another 200 meters or so before dropping a full 326 meters to the Marseilles coast. This should be a team pursuit, with Cannondale trying to prevent Cavendish and others from regaining contact if they are dropped on the climbs. If they succeed, the stage is Peter Sagan's for the taking... if not, it will be the first proper bunch kick of the Tour and the first chance for Cavendish and Greipel to take back some points on Sagan's maillot verde lead.

With a scant few points separating Simon Clarke from Pierre Rolland's maillot a pois lead, I would not be surprised to see the ORICA - GreenEdge rider in the breakaway again to nab some KOMs. The bigs? They'll sit back and have a "relaxing" day today.

Matthew Goss. He's more robust than the other sprinters, and a little quicker than Sagan if he gets the proper leadout, and did you see how well Daryl Impey did with leadout duties on Monday?