The racing is over, save the battle for the most revered sprint stage of them all. And what a stage it will be with ten circuits on the Champs Élysées under the lights. 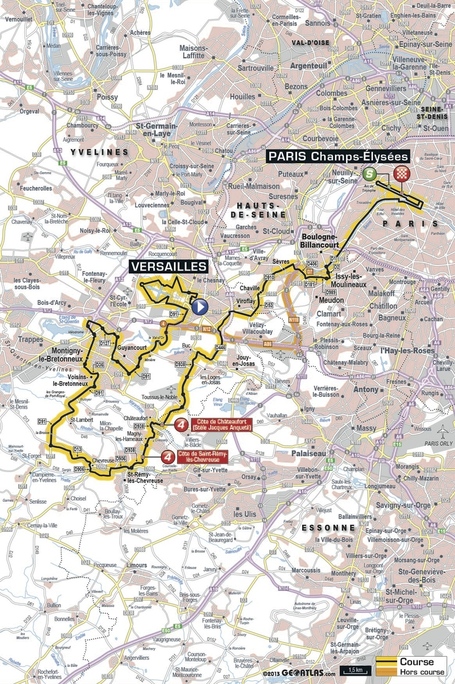 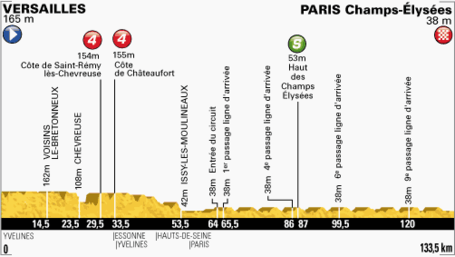 The moment we have all been waiting for is here, it is time to coronate champions and take time to revel in their exploits as riders meander their way from the grounds of Versailles to the traditional finishing circuits on the Champs Élysées. The final stage into Paris is half celebration and half race, its timbre changing dramatically as the peloton finishes their ride through the countryside and suburbs and hit the stones of the Champs for the first time. Gloves come off as doomed attacks fly and the sprinters' teams take control.

Before chaos reigns, there is 64 kilometers of champagne sipping, posing for pictures, and the venerable "tallest and shortest rider swap bikes" shenanigans. The route begins in Versailles for the first time, traversing 6 kilometers through the historic grounds before veering northeast towards Paris. There are two small climbs on the route - or speed bumps, more like it - but with the climbers competition already locked up, the scant two points on offer should pass uncontested and without significance.

The Tour has finished in Paris on the Champs Élysées since 1975, but the format was varied until 1990. Then, the race settled into its current format of ten circuits around the Arc de Triomphe, a playground for the sprinters. This year things change slightly with the race delayed until the evening, the ferocious racing on the circuits taking place under artificial light as the race finishes around 9:30pm. Yes, you read that right - the Tour is making the Champs a twilight criterium. For a party atmosphere, they could not have done any better, unless they were to make the final stage on a Saturday instead. Not that impending Monday duties will have any effect on the libation consumption and fervor of the crowds - this is Paris and the Tour, after all.

There is an intermediate sprint after the first four laps, but Peter Sagan's lead in the points competition is so large he could finish dead last in the sprint and the final and still win with a healthy margin. Instead, all attention will be on the final 7 kilometer lap, on the battle of the leadout trains as they swing into the final pair of turns, first a wide one to the left and then back to the right a little tighter, at 300 meters to go. It's a glorious spectacle, and worth waiting the whole Tour for. Drink up and enjoy.

Mark Cavendish. He hasn't lost on the Champs yet, are you really going to bet against him?