In 2011, I did some analysis of how the women's cycling calendar has been changing over time, and thought it was time to update this, and see if anything has changed in the last few years, and post-Olympic year to post-Olympic year. The results might surprise you....

As when I did this before, I used the UCI calendar on the website, and as before, there's a caveat about this, because the calendar can change as races are cancelled - we've learnt from experience that what's on the calendar at the start of the year isn't necessarily what will be raced (this year, for example, the Tour de Free State, Exergy Tour, Raboster and more have all disappeared since the 2013 calendar was announced). I haven't included national championships, as they vary hugely, so aren't comparable - nor have I used Continental Championships, given variations in field sizes and depths, and the fact there is no elite European Road Championships, only junior and u23. I also left off the Olympic and Commonwealths Games because they run on four-year cycles.

That brings me to another caveat, in that I'm not always sure what the UCI ranking means. We gained a substantial number of UCI-ranked races last year when existing races in the Lotto Cycling Cup upped their status from national level races to UCI-ranked, without any noticeable difference in the courses. It's also interesting to compare the field quality in some of the higher ranked 1.1 races, especially outside Europe, with those of the 1.2-ranked Omloop het Nieuwsblad, or the Drentse 8, which has the same field as the Ronde van Drenthe World Cup, raced in the same neighbourhood a few days later. No matter what the rankings say, OhN is one of the most prestigious races out there, and means a lot more to riders' palmares than a lot of the 1.1s do.

There are also some caveats about what some of the changes mean. Some race organisers change the format of their races - so in 2011, the Festival Luxembourgeois Elsy Jacobs was three separate day races, and a stage race on the calendar in 2006, the Novilon Eurocup Damesronde van Drenthe, is now the three Drenthe day races, including the Ronde van Drenthe World Cup. This especially counts with some of the "lost" days races - the 1-day Omloop door Middag-Humsterland has evolved into the six-stage Energiewacht Tour with a junior girls' stage race running alongside it, and Breedonk has become the Lotto Belisol Tour of Belgium (last year's Lotto Decca Tour). So things are not necessarily all bad.

However, there's another issue that's less positive and invisible from this analysis, and that's the type of races we've lost. In numbers terms, losing a French stage race and adding a Dutch one might look like a status quo - but we seem to have been losing the hilly races and replacing them with flat ones. This is an accident of geography, as it's the Netherlands and Belgium that are organising new races, and they're limited for hills. If anyone would like to do some rough analysis comparing changes in hilly and flat races, I'd love to see it.

But! Enough prevarication faffing about! On with the changes. 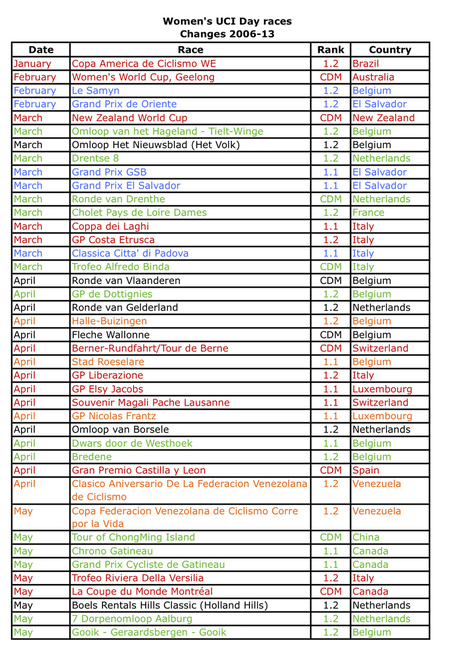 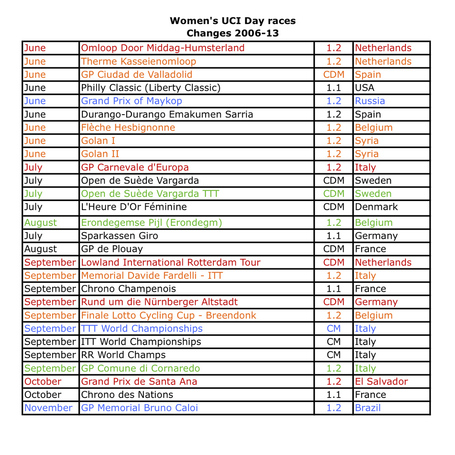 (To see the analysis in a bigger version click here: Day race changes)

The big loser from this is the Italian peloton - six Italian races have gone (and these haven't transformed into stage races), while they gained four and kept two. Switzerland and Australia lost all their races - and it's interesting to see which big cycling nations have never had any races (Great Britain, I've looking at you!)

Edit: I've spotted a mistake - L'Heure d'Or Feminin has been long gone - many apologies. It's only a mistake on the chart, not in the tables

Here's a little table breaking it down by ranked races 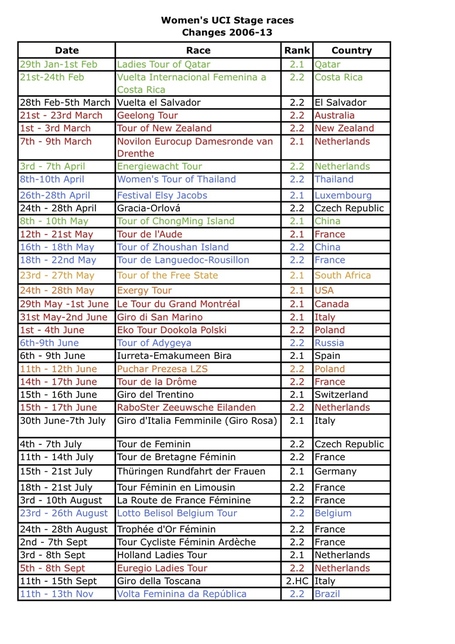 See it in a larger form by clicking here: Stage race changes

It's really interesting how the colour-coding shows there's a block of pure stability in the middle of the summer - I have no idea why this might be, but July and August races seem much more secure than spring ones. It makes me wonder, a lot of people say they think the women's races shouldn't clash with the Tour de France, as they lose audience, but yet they have been the most stable ones.

It also makes me sad for the whole continents/regions that have lost stage races - none at all in North America and none in Australis/New Zealand again. Africa had one race, the Tour de Free State, but that collapsed after just one year, when sponsors didn't pay.

There's another interesting thing that isn't clear from the table, and that's the new UCI category of race, 2.HC. This was meant to be a new super-category, but races have dropped down from it. Thüringen started as HC, but dropped to 2.1, and Exergy Tour was another one, but never happened. The Giro Rosa didn't get HC, because it was a bit touch-and go whether it would happen at all. Again, I do wonder what difference the category would have made to races, as Thüringen got it's usual excellent field, and while Toscana is likely to attract a strong field, that's because the Worlds are there this year, so it's excellent preparation....

For another look at how races have changed, here's a different kind of table: 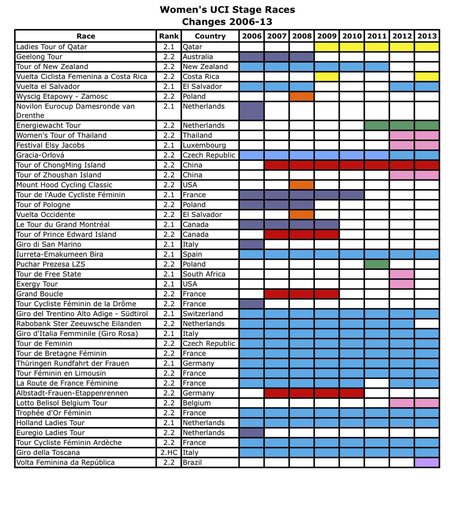 And some more figures...

That's pretty good news! So where have the changes been?

I'm interested in the messages about internationalisation there, with Australasia and North America the big losers. It's a difficult one for me, because on the one hand, I'm really pleased that there are UCI-level races in "non-traditional bike racing" countries, but on the other hand, it means the pro teams either have to find a lot more sponsorship, to enable them to travel to take advantage of the new races, or the fields just aren't equivalent, but the UCI points are. The solution, for me, is for the UCI to not just look at the overall numbers but to commit to working to keep the existing races stable, while growing races in other territories.

And then, as I said when I last looked at this, there's the issue of not only numbers of racing, but racing days. As we've lost two of the three Grand Tours, the only races allowed by the UCI to be longer than a week, there's more of an impact than there would be if we lost smaller tours. But the gains in the new Tours that started small, and grew, has made up for that - it was a bit of a surprise to find that, although the number of races has dropped, the number of racing days is around the same as in 2006.

Out of those, 86 stage racing days are in Europe, which is a real drop, and a lot of the day races have changed their status without changing their courses, so it's an interesting question what this means for actual racing days - are the incrases real for teams, or does it only count for things like UCI points. There is an annoying amount of overlap, given the "holes" in the calendar, too, because riders can't race the Giro, Czech Tour de Feminin, Bretagne, Limousin and Thüringen all at the same time (the obvious choices are Giro/Thüringen, eg, or Czech + Bretagne) or l'Ardèche and the Holland Ladies Tour - so it might be worth looking at the difference between racing days on paper, in theory and realistically. It really screams a need for the UCI to take more of a role in not just developing races, but negotiating with races about their calendar positions, to ensure that we don't have the current situation of enforced breaks, where riders can race even if they want to, and then 3 or 4 races taking place at the same time.

And I keep coming back to what this all means. It doesn't seem like the Lotto Cycling Cup moving to UCI registration has had an impact on the field, or on the teams they invite. And of course, the same caveats apply that increasing the number of races elsewhere in the world doesn't mean the pro teams can actually race them. It's also interesting that the thriving USA stage racing scene isn't represented at all - because while races like Nature Valley and the Cascade Classic provide excellent entertainment and racing, they're only nationally ranked. A quick win for the UCI would be to look at the barriers preventing them for applying for UCI status, and working with race organisers to overcome them - and the same with the excellent Australian races. Something has encouraged races in Belgium, South America and Asia to make the jump to UCI-level, I'd love to know what it is. Unless races like the many USA ones have looked at the cost and additional administrative hoops to jump through and decided that given they have such good racing already, would UCI status add anything?

(EDIT! As Vlaanderen says in the comments, one of the issues for USA races is the fact that UCI races are limited to how crit stages can be involved in races, and a lot of the American races want more than one crit, because they are really good for spectators and coverage, and relatively easy to run. I am with race organisers on this - maybe the UCI should have another look at their ranking system, and add categories that include more flexibility. Because as Vlaanderen says, if things are working right now, why would races want to change if they're working now?)

If you want to have a closer look at my figures, let me know in the comments, or want to discuss my analysis, please go ahead! I'm grinning to myself, because my biggest takeaway from this has been that it's really important to look beyond the numbers - that it's important to understand what some of the changes mean, both positively and negatively - and especially to look at this regularly, because even when numbers look relatively static between, say, 2006 and 2013, there's a huge upheaval and amount of movement going on - and that one thing we really need, if we're truly going to grow cycling, is some stability and support for existing races, so we're not working on short-term cycles of losing old races and starting new ones.

UPDATE! This has been sparking a lot of ideas and conversation, and so I'll be making some more charts to look at calendar stability, and overlap, and having a post to pull together the various conversations. Please do read and join the discussion in the comments, ask me questions on twitter, and come back to the Café for more, soon.

I've put up PART 2, with a chart showing the changes to all the races in one place, and a visual map of the 2013 calendar - and there are still surprises, which surprises me....