I've been looking at how the women's cycling calendar has changed over time, to back up the calls for the UCI to do something to help with real evidence. Earlier in the week I posted some charts and figures, demonstrating how the calendar has changed since 2006 and since 2011, when I last analysed this, but that has raised more questions. So I went back to my spreadsheets, and here are more charts - showing which races have stability, so we can see if we can find why, and showing the 2013 calendar in a visual view, to see overlaps and gaps.... and once again, I was surprised.... See what I mean, and then discuss the implications and solutions in the comments.

Changes over time - all races

In the last post, I included a chart to show how UCI-ranked stage races have changed over time, and it had an interesting block of stability in there. I wondered if these patterns extended to day races, too, so I added them to the chart. As before, I've taken the races from the UCI calendar on the website (the reason I start at 2006 is because that's how far their online calendar goes back to) 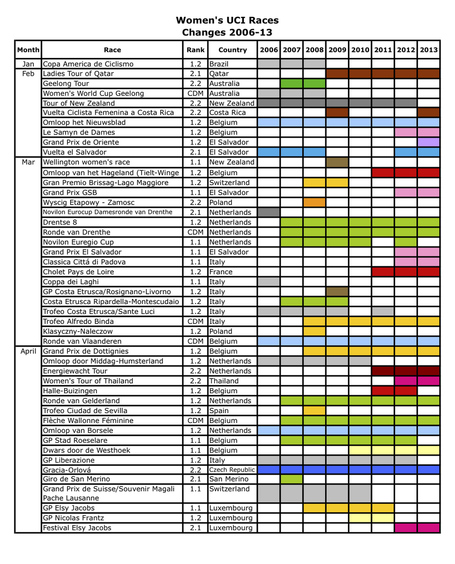 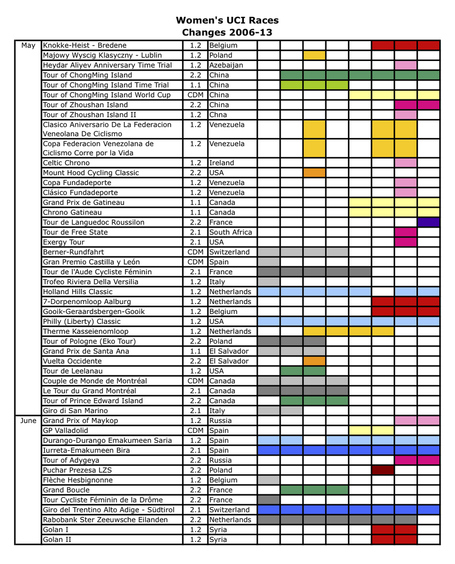 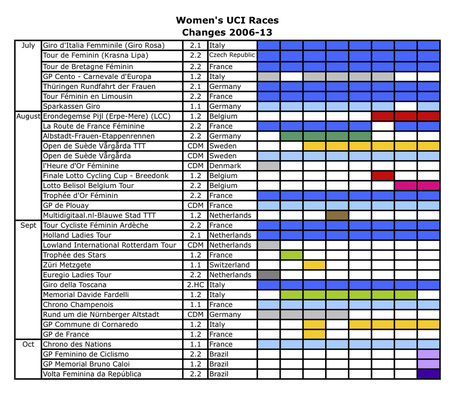 If you want to see these in a bigger size, the colourful version is here: All women's races changes chart

And there's a version in greys, if that makes it easier, here: All races b&w

I've tried to colour code it so the lighter shades of the same colour are day races that have around for the same time - blues are races running in 2006 and still running, greens started in 2007, etc etc.

Some of these races have moved around the calendar in their history (GP Comune di Cornaredo, especially, has been all over the place). And as I said before, some races have evolved - from the Drenthe stage race to 3 day races, and from 2 Luxembourg day races to one stage race, from Omloop door Middag-Humsterland to Energiewacht Tour etc, so I've clustered those together, even if the individual races moved position. I also cross-referenced on CQ Ranking to try to ensure that I picked up when races changed their names, so as not to include the same race twice.

One thing that jumped out at me while I was doing this is the way all the Swiss races have disappeared. I can't understand why - if it was, eg, Spain, with the economic problems, that could make sense, but Switzerland doesn't have those issues. And the UCI are based in Switzerland - surely it should be easiest for them to encourage and promote racing?

I don't know why, but looking at it across all races, it still seems as though races in July and August have been the most (relatively) stable. This confuses me, because a lot of people say that running against the Tour de France hurts women's races - but this evidence suggests it doesn't. I try not to read too much into patterns, but looking at the calendar like this made me think about how unbalanced it feels. So I made another chart....

One of the things that struck me after the last analysis was how the figures - that there are 152 UCI-ranked racing days in 2013, as opposed to 150 in 2006 - are misleading, not just because of those, 86 are in Europe, so the pro teams would need a big increase in funding if they want to travel to take advantage of a lot of the new races, but also because of the overlaps. So I made a chart putting the racing calendar in visual form.

If you want to look for closely, you can look at the pdf: women's cycling 2013 calendar and the excel sheet: Calendar spreadsheet (this names the races, and where they are in the notes).

I've left off the early-season Tour de Qatar and the late October/November races, because they are outliers in lots of ways, and I wanted to focus on the main road season. Taking out the non-season races removes 9 racing days, leaving 141 UCI-ranked days in the season (including World Championships).

What surprises me about this is exactly how much the stage races overlap with each other so often - and how much space there is with no racing. I know part of this is because we're still missing the Tour de l'Aude in May, but there are some really obvious patterns. The first half of the Road World Cup (CDMs) happen within a month - and that's because they're the Spring Classics, that sort of makes sense, but why are the continuing stage races overlapping so much? On one hand, I like that that happens, because it means the division into 2.1 and 2.2 works - the top riders are at the Giro and Thüringen, while the lower level teams and riders get to race with opportunities for themselves - but on the other hand, it demonstrates how the number of racing days doesn't equal opportunities to race.

It really shouts for the need for the UCI to work more closely with races, years in advance, to try to balance the calendar more, so there's good-quality racing throughout the season. It's great that the day-racers get so many opportunities, but just as it's the climbers who have lost out from the disappearing races, as "mountain" races have been replaced with flat ones, so the stage racers, who get better over time, and have longer-term tactical skills, are at a disadvantage. This wouldn't be a quick-fix - as we know, races have to be organised years in advance - but there's a clear opportunity for the UCI to add a LOT of value.

I suppose one could argue that this separates women's racing into clear seasons, but I know this wasn't intentional - losing stage races in May was not a plan! The calendar looks like this because of circumstance, and races folding for reasons of losing sponsors and organisers, not because of design!

I'll be coming back with more conclusions (and an Executive Summary!) but in the mean-time, I'd love to discuss this in the comments. I'd love to have your views on subjects like:

As always, if you'd like to see my spreadsheets by email, or shared some way, let me know in the comments. If you're discussing my charts and findings etc on other sites and blogs, please can you add a link and attribution please? If you haven't signed up to Podium Café yet (and why not?!) you can talk to me about this on twitter or in the comments of the women's cycling podcast, where Dan (omnevelnihil) and I discuss some of the findings of the first post.