After yesterday's lumpy stage and brutal finish, Stage 4 of the 2013 Giro Rosa was the longest of the race - 137km, longer than the UCI's usual limit for stages - finishing with a sharp uphill finish. It was another chance for Marianne Vos to do all she can to try to increase her overall lead before the race hits the mountains... and for the other 12 GC contenders to do all they could to try to stop her! Keep reading for stage videos, links and results

There's hour-long video of the stage. It's in 5 parts, so either start at Part 1 and let the playlist run, or click on Part 2, Part 3, Part 4 and Part 5, which has Vos playing her accordion on the podium, and interviewed in English.

Or if you just want to see the end-game of the race, here it is:

It was the hottest day of the race so far, and for once the parcours had a bit of a warm-up before the first climb. The stage started in Monte San Vito, running south-west, away from the coast, up onto and along a plateau, out to a small loop, then back along the same roads before diverting east to Castelfidaro, and the final short climb - only about 30m of ascending, but doing it steeply.

With yesterday being hard, and it being such a long day today - after the stage, they were in for a 570km transfer - Rabobank-Liv/Giant and Specialized-lululemon kept a firm hand on the peloton, controlling the front and chasing down any escape attempts. That's not to say there weren't riders and teams trying - with Valentina Bastianelli (of course!) and Amanda Spratt giving it a go, among others - but with the headwinds helping the peloton rather than the escapees, everything was reeled it, and it became clear that the stage would come down to the final climb.

The peloton started organising into sprint trains as every team raced to reach the bottom of the climb first - and then they were off, with Evelyn Stevens and Marianne Vos delivered into the perfect positions. With Claudia Häusler, Ashleigh Moolman and Tatiana Guderzo at the front, they raced together up the wide climb - Moolman and Stevens looking the strongest, until in the last 300 metres the road flattened out - and Vos was off, using her sprinting advantage to distance the climbers. 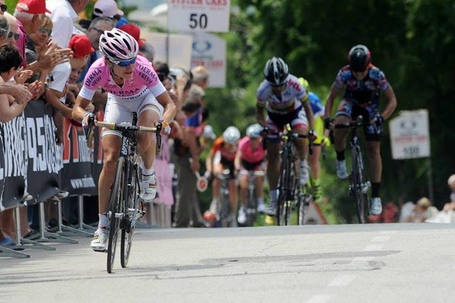 Vos checks behind her in the final sprint.... (photo from the Giro Rosa facebook) 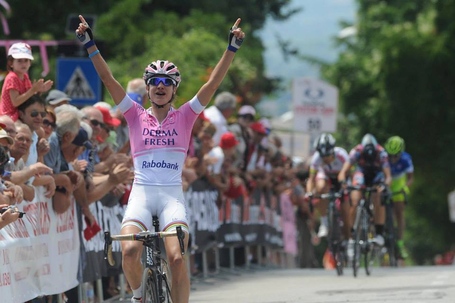 ...and crosses the line with plenty of time to celebrate! (photo from the Giro Rosa facebook)

RabosportTV put out a post-race highlights video - with English interview with first-time Giro rider, Pauline Ferrand-Prévot - and here's the translation of Vos' interview - huge thanks to Anne-Marije Rook for providing the translation!

Reporter: Marianne Vos had previewed the course and knew what the finish was like, the rest [of the sprinters] started too soon and Vos was able to finish several bike lengths ahead of her competitors.

Marianne,it must be nice to sprint against your immediate competitors.

Vos: Yes, of course that’s nice. And after yesterday, I did have a good feeling of course but today was a different stage, a long stage. It was hot along the way and so it was important to be cautious, to drink enough and don’t do anything crazy. I had to dig deep yesterday so then it’s always uncertain what the next day will be like.

The last 2k were pretty steep. We luckily explored the finish yesterday so you know what it will be like and I knew I shouldn’t start too soon and that paid off today in a beautiful win.

Reporter: So what does that mean for the general classification?

Vos: Today the differences aren’t very big but I did extend my lead a little bit so that’s nice for the days to come. But now it really starts.

Reporter: So is a sprint like today about testing your legs and seeing what your competitors will do, or do you clear your mind and just go for it?

Vos: An uphill sprint is different from a normal climb. Once you get to the top, you don’t have to go on and it doesn’t matter if you’re blown. That is good for me so today was a good finish for me. It’s also nice to see the competition and how they’re doing. We’ll just have to see what the coming days will bring.

This really is the tipping point of the race - with Stage 5 and Stage 6 both mountain finishes, Vos, whose "weakness" (remember that's relatively speaking) is long, punishing climbs, will have to work hard to keep her maglia rosa. There's a bit of a descent before tomorrow's big climb, which will suit her, but the smaller climbs in the earlier part of the race could be a problem for her. And with Guderzo, Häusler, Moolman and Stevens looking very similar so far, tomorrow could blow the race apart. It's very exciting - and a credit to the course organisers. Although the stages are too far away for comfort, once the riders are there, the race has been set up for an exciting second half. Read Jens' analysis of the big stages for more details about what they're facing, and watch pro rider Amber Pierce's video review of the tactical implications of the stage.

A puncture for Rossella Ratto on the run-in for the climb meant she couldn't contest it properly, and Anna van der Breggen took over the Best Young Rider jersey, while Vos leads the mountains and points competitions, and Guderzo is Best Italian.

According to the Press Release, Vos "received a unique and precious pink accordion on the podium" today - look out for her playing it in the videos!

Blogs about the stage from Gracie Elvin, Tiffany Cromwell and Marijn de Vries (in Dutch or via google translate) - and I'll look for more tomorrow and edit them in.

As always, check back for more videos and links as they go up, and talk through Stage 5 as it happens. And I have a question for you in the comments - at the half-way point, who do YOU think will win the Giro? Place your bets, ladies and gentlemen - it really does feel like anything could happen!

UPDATE! One of the fun aspects of the Giro is the way they run the sign-ins, with a DJ, music and a party atmosphere. Each team gets a song that's played for them every day, and I've been a bit disappointed we haven't seen as many videos of dancing riders as we did last year... and then Sean-Velofocus tweeted this: