TdF Stage 6 Preview: Sprinty Goodness, With a Chance of Echelons

After a few lumpy days around Corsica and a team time trial, it's time to let the sprinters do their thing for a few days. The second of three stages suited for the fast men is a shorter affair with nary a bump to interrupt the proceedings. But, with luck, there will be echelons.

Share All sharing options for: TdF Stage 6 Preview: Sprinty Goodness, With a Chance of Echelons 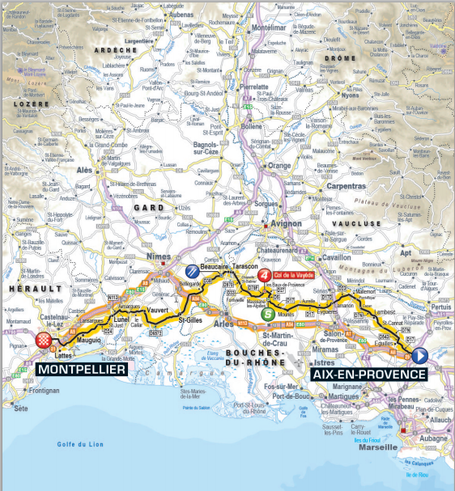 Finally! A straightforward sprint stage! I suppose they could have made this stage more pancake flat had they tried, by making the group do laps up and down the coastal roads, but that would get boring, no? Instead, we head inland before veering back towards the ocean. Actually, it's a shame that they aren't using the coastal road route because I hear there is a chance of nice, strong Mistral winds tomorrow. Echelons anyone?

We will all hope for some racing in the last hour or two to break up a processional ride to a sprint. If things get nasty, we can all play a game of "spot the sprinters in the second echelon" and, perhaps, even the same for GC contenders. Remember in 2009 when Lance Armstrong snuck in the lead group and his teammate Alberto Contador was left some thirty seconds behind in the second echelon? That was some polemica, wasn't it? I doubt we see some of that tomorrow, but somebody could lose a chance at the stage or overall. So, let's all cross our fingers for some crosswinds, okay? Because sprints are awesome, but echelons are awesomer.

Assuming most of the big sprinters make it to the finish in a group, we should see a thrilling sprint and battle for the green jersey. The jersey likely won't leave the shoulders of one Peter Sagan, or at least not yet, but Cavendish and Greipel, along with others, will want to narrow the gap and nab some podium kisses.

Mark Cavendish. It looks like his bronchitis is behind him, and who else has Gert Steegmans on leadout duty? Boonen wasn't kidding when he called the dude a TGV train. Plus, who better to shepard you through some echelon action than a team full of classics riders?