Do You Live By the Rules?

The Velominati collective have told you all you need to know about how to be a cyclist. The rest is up to you.

Share All sharing options for: Do You Live By the Rules? 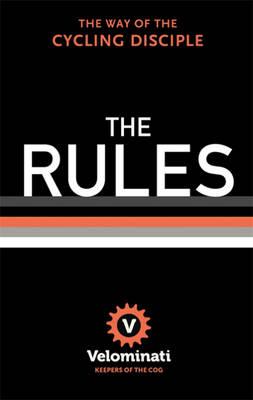 Last May I was asked how I was enjoying Bike to Work Day. As often happens, Bike to Work Day fell on a day when I had to be somewhere by car, because casual holidays live to mock me. So I snarked back that Bike to Work Day celebrated the idea that people should congratulate themselves for riding on a lovely day in May, and that it didn't really resonate with people who bike in day after day, through the dark, wet winter months. But I like free water bottles and NUUN samples, so OK.

I'm not proud of myself for feeling this way, and ultimately I think everyone is better off riding than not, as much as their life allows. But I can't help but think of cyclists coming in different categories -- racers, distance hammerheads, randos, messengers, commuters, hipsters, dirt riders, trick riders, errand-runners, enviros, families teaching their kids, and so on. And those categories don't have nearly as much in common with each other as we want to believe. This is something explored more in Bike Tribes, which tried to sort out all the different species of cyclists.

The Rules is one end of that spectrum, and only one: the world of the competitive Cyclist. Written by the Velominati collective ("the V"), five dudes with a website who function as the sport's "illuminati," or "enlightened ones" or, more simply, the Keepers of the Cog, The Rules is the culmination of years' worth of probing the subject of what makes a "cyclist," or at least a particular subcategory of cyclists. Or maybe it's about what makes a Cyclist, as opposed to the lower-case counterpart. Either way, it's a club you can't join without paying your dues.

La Vie Velominati is how the V describe the path they espouse, and the Rules are the pillars of that way of life. Some of them look familiar -- including the all-important Rule #5: Harden the Fuck Up. Being hard enough to call yourself a cyclist is well-ploughed terrain, but the V take each of the 91 rules (so far) and... shall we say... run with them a bit. Each new rule adds a bit more wisdom to the bigger story. Along with Rule No. 5, for example, is Rule #20:

There are only three remedies for pain -- These are:

Much of the book is dedicated not just to the virtues of hard work, but to the attitude and lifestyle of a competitive cyclist. Numerous rules cover the bikes themselves, such as Rule #47 (drink tripels, don't ride triples); Rule #48 (saddles must be level and pushed back); and the nearly koan-like instruction on the proper number of bikes, Rule #12, which comes in two flavors: N +1, where N is the number of bikes currently owned, or S -1, where S is the number of bikes that would lead to separation with your partner. Each rule gets its own background explainer. None stops simply at dull platitudes like "harden the fuck up."

The V have polished their rule discussions to the point where pretty much all of them make sense, often a lot of sense, which is good because telling people what to do is tricky business starting at about age 3. So it helps to have logic on your side... but it helps a lot more to be funny. To wit, Rule #69: Cycling shoes and bicycles are made for riding.

Walking is slow enough as it is, but walking in Cycling shoes is hazardous to our health. If there were more ride-through liquor stores (one of America's proudest inventions), we'd never even have to go to the shops....

Time pedals have long been an icon of the sport, known for an all-metal cleat that was suicidal in cafes. Many a charming rouleur strode into a local watering hole, ready to impress the pretty lady in the corner by being such a virile athlete, only to wipe out and take down a few curtains after hitting a half-damp patch of floor. ... It's a proud moment in every road Cyclist's life when they first skitter and fall to the ground on the varnished hardwood floor of a shop. 'No, I'm not pissed, I'm a Cyclist.'

The Rules accomplish a few other goals along the way, detailing acceptable fashion sense, pack behavior, pronunciation, use of the metric system, all with a certain unifying arrangement, where one rule often links back to another. It's not a random series of old posts from their website, but an eloquently-knitted fabric for the Cyclist who cares so much about such things as to capitalize the word.

And really, that's the point. If Cycling is something you care so much about, if it's your passion, then the rules don't feel like a set of edicts but rather a well-articulated survey of the ins and outs of Cycling passion. This is what takes The Rules away from flirting with righteous snobbery. Honestly, if that were the purpose, the book would fail, because nobody wants to read that and a book written in such a spirit would be about as fun as a saddle sore. But as a work of passion, The Rules comes off as the authors talking about the sport into which they've poured so much of their lives and energy and identities. They lovingly embrace the marginalization of Cyclists from society -- and believe me, it wasn't long ago in the US where lycra and shaved legs were as acceptable as centaurs -- because when you love something enough, you want to live it all the time.

This book is for you if you're a competitive cyclist or fan of racing (i.e. the pros), since La Vie Velominatus is pretty much the way pro cyclists (and many of us amateur imitators) live their lives. It's also for you if you like the Bike Snob books and a good send-up of Cycling. It's especially for you if you find yourself drawn more to the cobbled classics, for reasons you may or may not be able to explain. It's probably not for you if you're a casual rider who doesn't relate to (or appreciate) the murmurs of the competitive guys saying what it takes for you to be taken seriously, in their eyes. It's not for you if you're a triathlete -- their self-assigned nemeses ("always looking for a way to suck less than they always will"). But even then, if you can connect to the spirit in which it's written, reading The Rules will make for a fun few hours, and might even start you on the path to Mount Velomis.

And with that, I must now go check whether my saddle is level.