Alison Powers of NOW and Novartis for MS pulled on the leaders jersey after the 3 mile prologue around the Tetherow Golf Club. Optum/KBS was well positioned with the entire team in the top 15. TIBCO place Shelly Olds on the podium alongside Colavita's Laura Brown. 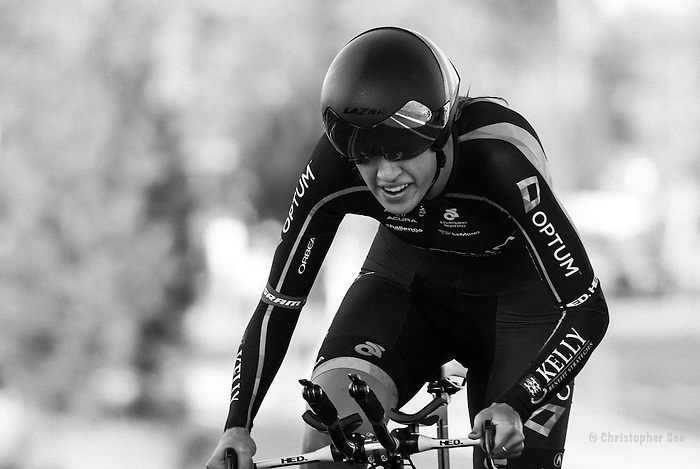 Abbott, Haeussler and McGrath away on MacKenzie Pass Stage 1 rolled out neutral for 3 miles. When the flag dropped the pace rose with Optum/KBS and Exergy looking to animate the race. The nervous peloton stayed together through a number of minor crashes. The feed at the base of the long ascent to MacKenzie Pass marked the beginning of serious work. NOW sought to control the pace and hold on to Alison Powers race lead. Mara Abbott, Kristen McGrath and Claudia Haeussler made the break away that stuck with Powers and a group of 8 chasing 3 minutes behind. Missing from the action was Optum/KBS. In the end Häussler attacked to win out over Abbot and McGrath. McGrath was able to put time into Powers and pulled on the leaders jersey. No time to enjoy the scenery for this Exergy rider The Crooked River Runs north toward Prineville Oregon. A quiet country road winds alongside the river and into an rugged gorge cut out of basalt. The out and back ITT was an opportunity for Powers and NOW to put time into McGrath. Powers took the top step of the podium, but McGrath held onto her 4 minutes over Powers and the overall lead. Amy Thornquist, a time trial specialist brought on as a guest rider by Salt Lake City's DNA pb Plan 7 climbed on to the third step. In GC, 2:38 was the gap between first place and Haeussler in second.2:48 seconds separated the leader McGrath from teammate Abbott in third.

The early miles of the Cascade Lakes stage were fairly uneventful. Aggressive riding brought the riders the first feed zone. NOW rider Olivia Dillon went on a long solo break. SHe built up a a lead of over a minute. Behind her a crash in the filed put three riders down in a tangle of bikes and gear. All three were taken to the Bend Memorial Clinic. Thornquist went home with fractures to her pelvis, Vanderkitten Sophie Williamson broke her wrist and suffered facial injuries. DNA lost Keri Gibson who was assessed for a possible concussion. The field and caravan were split and riders found themselves with out team cars. At the front NOW and Optum/KBS launched repeated attacks to soften Exergy's hold on the lead. Nothing stuck until Donovan (NOW) and Lauren Stevens (TIBCO) got away on the final climb toward Mt Bachelor. Stevens won the stage, with McGrath holding her race lead. Saturday night is Crit night in Bend during the Cascade Classic. Optum/KBS, shut out of the results all week, wanted a win. Lauren Hall delivered in front of Shelly Olds (TIBCO) an Alison Powers (NOW and Novartis). Alison Tetrick (Exergy 2016) in the heart of the pack Sunday brings the final day of the Cascade Classic. The Awbrey Butte circuit and three trips up O B Riley road and the notorious Archie Briggs climb. It's only a total of 500' of climbing, but at the end of a five day stage race and in the heat of the afternoon, this stage becomes a test of stamina. In the end Amanda MIller (TIBCO) broke out of a three rider break with Jade Wilcoxson (Optum/KBS) and Lauren Rauck Komanski (NOW and Novartis) . Miller went hard on the steepest section of Archie Briggs Road to pull clear of her break away companions. Wilcoxson finished second 4" behind, and Komanski filled out the podium at 6" adrift of Miller. The break held just over a minute ahead of the main field. Kristin McGrath (Exergy 2016) held took home her first NRC win and the Nichol Reinhart memorial trophy. Exergy and TIBCO patrolled the front of the pack for two laps. Olivia Dillon (Now) hard at work in the field McGrath with the Rienhart Tropy The Complete gallery is here.