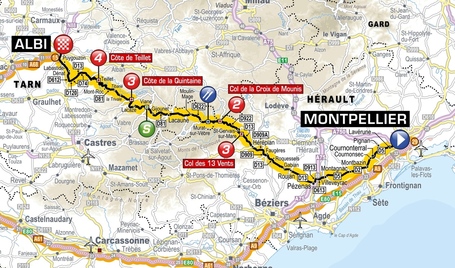 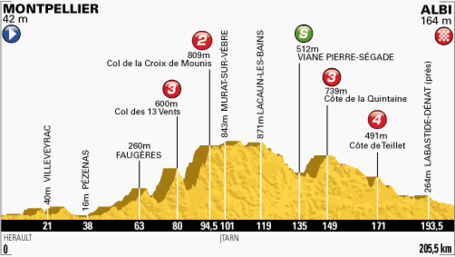 Whenever you see the name "Albi" in the TdF roadbook it can only mean one of two things, either the race is about to enter the Pyrenees or it is just exiting from the Pyrenees. When the case is the first as it is this year it generally means a transitional stage as the race moves from an "easy" phase into the mountains.

Stage six is a lumpy ride inland ride from Montpellier which looks like a definite opportunity for the first successful breakaway of the race. With the Pyrenees looming it will be limited how much chasing teams are willing to do and Orica may very well want to let a reasonably safe break go and put in a reasonable chase to let Impey keep the jersey one last day in the Pyrenees. Cannondale might be tempted to try and keep it together with Sagan coming out of the first week sprints emptyhanded so far but it's doubtful if they have the power to do it alone. Most likely we'll see some teams without the big sprint or GC hopes trying to make it their day with a breakaway win. There are a few ones looking for sponsors who will throw everything but the kitchen sink at it to get into the early breakaway, most notably Vacansoleil and Europcar. Plus the token dozen of random frenchmen and the entire Sojasun team of course.

We should also see some of Rolland's competitors in the KOM competition try and get in the break to grab the jersey off his shoulders and most crucially, try and get him out of his "splendid" polkadot shorts. Clarke, Kadri and de Gendt could all steal the jersey on the stage.

Lieuwe Westra: Westra has the strength and climbing to get in the break again and the power to finish it off . Vacansoleil are crying out for a result here and it's hard to see a break without either Westra or de Gendt going at this point.