It looks like a tradition might be starting: Americans winning Giro Donne stages on the Four of July! Last year it was the sprinting fireworks of Shelley Olds on Stage 6 - this year it was a very different kind of day, with Mara Abbott demonstrating her return to the European peloton on the huge finishing climb. As the race entered the mountains, everything about the race changed - but it's not over yet.

Official 10 minute race video, with Abbott in English and translations of the Italians at the end:

The hour-long video is in four parts - to watch it all, start with Part 1 and let the playlist run, or there's Part 2, Part 3 and Part 4, the finale:

RabosportTV clip of the day - with interviews with Roxane Knetemann, Megan Guarnier in English, and a very tired Marianne Vos:

This was always going to be the stage that decided the race. Marianne Vos had been in the maglia rosa since Stage 1, and has been racing for every possible second's advantage, because she knew that the two mountain stages, finishing on non-stop, brutal climbs, would be hard for her. Today's stage may have been the shortest stage at 73.3km but it was hard - starting with climbing, and then a little descent, and the final climb, Monte Beigua - climbing 1,287m over 14km, with an average gradient of 9%, rising to 15% in places. Jens described the stage in more detail in his mountains preview - and the whole peloton knew that after the first half of the Giro had thinned the group of real General Classification contenders, this was where the real race would begin.

It started off fast, leaving the seaside town to Varezze with another of the climbs from the start that have been a trademark of this year's route, and that must be so frustrating for the sprinters, and those who like a bit more of a warm-up! At the GPM point at 17.6km Valentina Scandolara (MCipollini-Giordana) and Tiffany Cromwell (ORICA-AIS) raced for the precious points - Scandolara winning, but Cromwell taking the lead in the Queen of the Mountains competition, with Marianne Vos leading the chase behind them. The early climb caused a grupetto of around 43 riders to form off the back, but the rest of the race was one big peloton until, at around 30km, the big break of the day went.

This ended up with around 12 riders - Megan Guarnier & Roxane Knetemann of Rabobank/Liv-Giant, Valentina Carretta & Valentina Scandolara (Cipollini), Alena Amialiusik (BePink), Adrie Visser (Boels-Dolmans), Giorgia Bronzini (Wiggle Honda), Ellen van Dijk (Specialized-lululemon), Joanne Kiesanowski (Tibco), Patricia Schwager (Faren Kuota), Kristin McGrath (USA National Team) and heroine of yesterday's rider Q&A, Amanda Spratt (ORICA) - with no GC contenders in it. With this break up the road, it meant that none of the climbers had to worry about their rivals attacking and escaping early, so they could sit back and conserve their energy - and although a couple of riders had an attempt at attacking off the front of the chase, Rabobank controlled the peloton so that the escapees never got more than a minute - and were caught on the descent going into the climb, when Häusler attacked and Vos, Brand and Cromwell joined her, bringing the peloton with them.

Here the race began, with all the big favourites on the front as they started the long slog, and the non-climbers getting out of the way into grupettos. Almost immediately, Mara Abbott (USA) and Evelyn Stevens (Specialized-lululemon) attacked, and although Vos tried to follow, she couldn't keep up with the climbing specialists, and lost their wheels.

As Abbott's lead grew and grew with every kilometre she climbed, Vos' hold on the maglia rosa slipped away. Stevens held on to second place on the road until the punishing climb took it's toll on her - and it was 2009 World Road Champion Tatiana Guderzo (Cipollini), five-times Giro winner Fabiana Luperini (Faren) and 20-year old Francesca Cauz (Top Girls Fassa Bortolo) who caught and dropped her.

No matter how they tried, they couldn't catch Abbott, and it was clear she had not only ridden to win the stage, but also to take over the leadership of the race - the perfect Fourth of July for her!

This was a triumphant return to European racing for Abbott. In 2009, she won a Giro stage and came second overall behind Claudia Häusler, and then in 2010 duelled with Häusler's team-mate Emma Pooley in both the Grand Tours, coming second behind Pooley in the last ever Tour de l'Aude, and beating her in the Giro Donne. She signed to Diadora-Pasta Zara for 2011, but couldn't contest the maglia rosa, ending tenth overall and taking a break from pro cycling. Problems she had had manifested as an eating disorder - and I highly recommend this article by Bonnie Ford about that period of Abbott's life, and how she came back to cycling, racing in the USA with Exergy TWENTY16.

This year Abbott has only raced in the USA before now, winning the San Dimas Stage Race and the Tour of the Gila, and escaping in the USA Nationals before a botched repair of a mechanical took her out of contention. She's proved she was back on the National scene - and now she's proved she can make it internationally, too.

I love my teammates, I love the #GiroRosa and I LOVE the mountains. Thank you everyone. 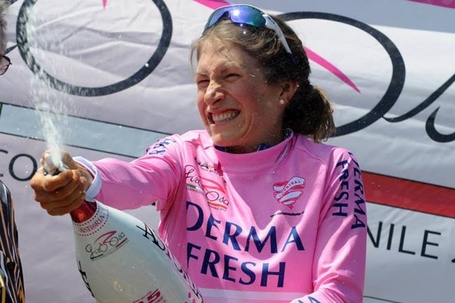 As for Vos, she was philosophical after the race, saying in the Rabosport race report "Today was a serious test and I just was not good enough. I can come up with all kinds of excuses, but the others were simply too strong."

There's a translation into English on Velonation, where she talks about how the changes in her training for mountain biking have affected her climbing (which was never her key strength anyway)

"I'm not suddenly going to find my climbing legs overnight," Vos said. "They are just not here this year in the Giro. I have those two stage wins to cherish, and we will see what is possible on Saturday.

"The classification is gone I think," she added. "There’s nothing I can do, the rest are too strong this time. It does hurt that I had to give up time to more riders than Stevens and Abbott. Those two are pure climbers, so not their prevalence is not surprising, but I had to let them go.

"Fortunately, I do know the cause, but losing is never fun."

So if Vos can't take the maglia rosa, what does that mean? Well, this is Vos! She's bound to try everything tomorrow, and if she can't get up the GC, there's a sprint stage to contest on Saturday. She's nothing if not a fighter, and she does enjoy a challenge...

Abbott doesn't have the Giro sewn up yet, however. With another climbing stage to come, and a 16km timetrail, there's everything left to ride for. Stage 6 starts with a descent, which isn't her speciality, and although the climb is less hard than today's, anything can happen. Read Jens' preview - and come back to the comments to talk through the stage as it happens

Tiffany Cromwell, who started the stage wearing Vos' green Mountains jersey now wears it in her own right, leading the competition by 1 point ahead of Vos and Scandolara; Francesca Cauz wears Best Young Rider jersey, + 02:53 on Rossella Ratto; and Vos still leads the Points competition, with 56 points, ahead of Tatiana Guderzo's 26.

Tomorrow Vos will be missing Annemiek van Vleuten, who left the race to support her family after the death of her grandmother - our thoughts are with her. But in happier news, Elisa Longo Borghini, who couldn't compete after fracturing her hip, has found a way to be road-side, cheering on her team - look out for her at the sprint point.

In my Stage 5 Q&A with ORICA's Jessie Maclean there are tales from the climbing grupetto, and a round-up of the best tweets about suffering and pain - and pro-cyclist Amber Pierce discusses the reasons behind the team tactics and implications for the race in her Stage 5 video review. Velofocus was roadside on the seemingly-endless climb, and has some amazing photos of the riders as they battled through it - many thanks, Sean, for letting me post these - make sure you all click through to see the rest. 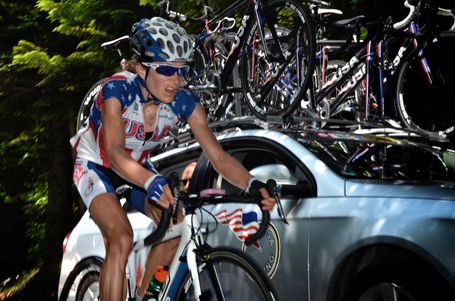 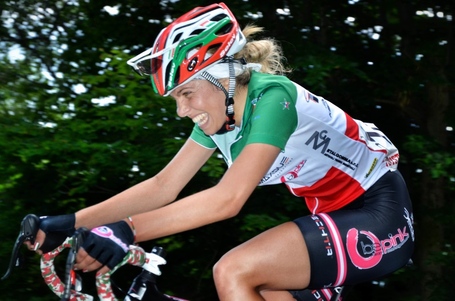 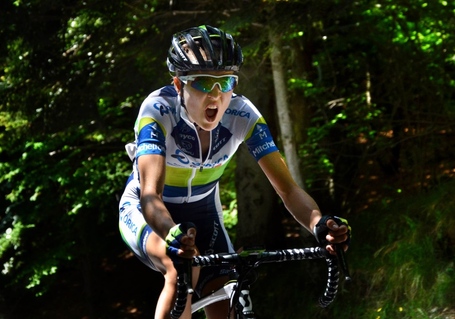 The ORICA-AIS race report gives the team perspective, and Ben Atkin's race report is on Velonation. Marijn de Vries, Tiffany Cromwell and Gracie Elvin all have rider blogs from the stage. There are more photos of the stage on facebook and photos and a short race report on Cyclingnews.

UPDATE! Jen See's race report on Bicycling and CJ Farquharson's stage report and photos at womenscycling.net, and photos at CJFoto.

As always, I'll edit in more links and videos as I find them - and look to the comments for updates too.