Who were the worthy winners of the day in France today? Picking isn't easy and I haven't as much as a Zombie-sockpuppet to hide behind. But here goes. 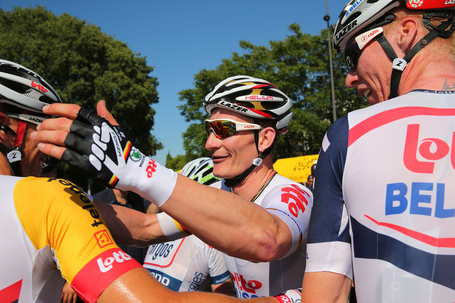 When the Tour started we all looked forward to seeing the four big sprinters facing off against each other in a series of sprint battles. After a few legitimate sprints we've seen three of them take stagewins and the fourth, Sagan, finish second or third on every stage andholding on to the Points jersey. But the true story of the last two sprints hasn't been about Cav and Greipel but rather of their leadouts. Yesterday OPQS did everything right and today it was Lotto's turn to fire on all cylinders. Their setup for Greipel made his victory look easy today as Cavendish came flapping up futilely from behind. Cycling is a funny sport, just when you think it's all about the big stars the worker-bees triumph and steal the glory. 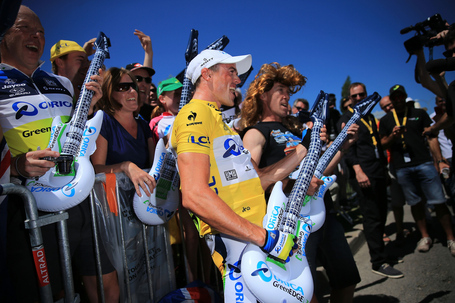 I don't know if the story of Gerrans wanting to hand off the Yellow jersey to his loyal teammate Darren Impey is actually true. It's a good Tour-story anyway and from the TV images it certainly looked like it was a planned and conscious move. Either way Orica as a team are having a beautiful first week of the TdF. Two stagewins and two yellow jersey wearers make them the big winners so far. And then we haven't even mentioned the bus yet...... which leads us to: 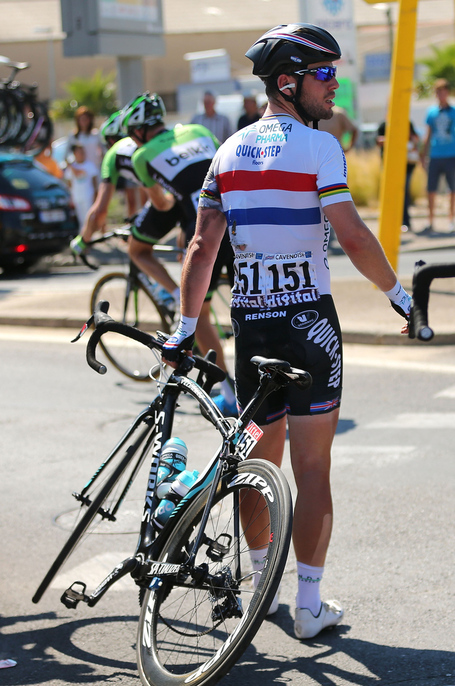 There have so far been the usual mass of heroic stories of riders crashed, injured and sick struggling on in the Tour to keep the dream alive. The dream to take part and succeed in the biggest and grandest bikerace, or even sporting event, in the world is so strong that people go to extraordinary lengths to hold on to it. Riders like Hesjedal and Vande Velde who keep riding with broken ribs and screws loose, Thomas with a broken hip and Tony Martin, looking like Return of the Mummy, dubbed into German, they all symbolize this spirit. The Tour is about enduring suffering and abuse and this is where our third star comes in.

Being a team bus on a day when Mark Cavendish fails to win a Tour de France sprint is maybe the hardest job in the Tour de France. Reports today described the scene as he returned after the stage, where he crashed-saw his train fumble and then lost to his arch-nemesis Greipel, as brutal. Inside the bus he screamed, swore and threw objects. His DS stayed out of the bus,quietly saying he would take the teamcar to the hotel in order to avoid Cav's fury until he had settled down. Lefevere the manager exited the bus saying that "he's mad" . Left to take the abuse where his teammates, who had strength in numbers to defend themselves, and the one poor bastard that could do nothing but sit there and take it: The Bus. Now much publicity went to the Orica bus for it's cock-up on stage one but if there is one bus that deserves recognition it's the long suffering Omega Pharma bus. The one that embodies the glorious pain and misery that is the heart of the Tour de France.