Share All sharing options for: TdF Stage 8 Preview: Welcome to the Pyrenées 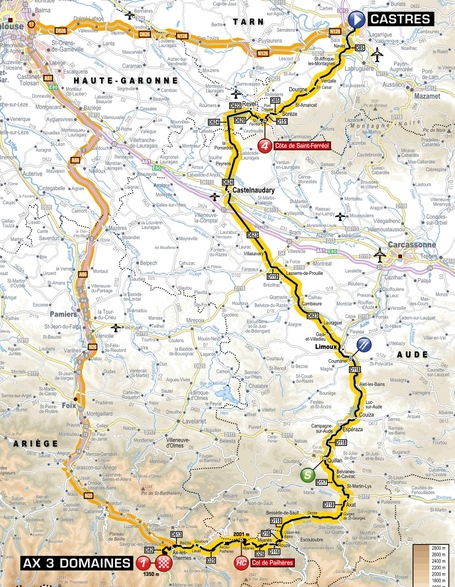 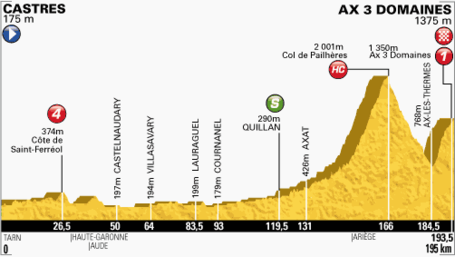 It's time for a weekend in the Pyrenées and for the peloton it's the nervous, uncertain first meeting with the high mountains. After the opening week it's always a bit of an unknown how the body will react to the change from the fast furious racing on the flat to the long uphill grinds. There is always one or two favorites that don't handle the transition too well and suffer on these first mountain climbs.

This year has an added evil twist in that the first real mountain pass is also the highest in the race. Port de Pailhères is the highest pass and also rated the third hardest climb of the race in our mountains preview so the riders will have a rough introduction indeed to the mountains. The first HC climb comes after a fairly flat 130 km march to the foot of the Pyrenées. After the 15 km Pailhères the riders drop down to Ax les Thermes and then immediately start the 7.8 km climb to Ax3 Domaines. 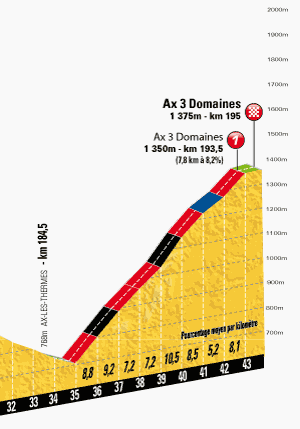 At an average of 8.2% this is a typical Pyrenees climb and one that has been used before in the Tour, most famously in 2003 when Carlos Sastre attacked early and won solo with a baby pacifier in his mouth. That time they came via the Port de Pailhères just as they do now. It should prove a harsh challenge but it's not massively challenging in itself so what kind of bikerace we get should depend a lot on how teams will want to tackle it. The stage on Sunday is a brute and there might be some conservative riding because of that but then again there is the question if Sky is coming weakened out of the first week with some crashes and some riders who have been finishing quite a ways back. There might be one or two who will want to give them a jab and test them if they can really pull off their patented lock-down strategy when the team is possibly not 100%. We could perhaps see an ad hoc alliance on the road between Saxo-Tinkoff and Movistar who are both looking fresh and hungry. Contador and Valverde have been known to work well together in the past when they have had aligning interests. The"normal" expectation would be that the real fireworks are delayed until the top half of the final climb on a first climbing stage like this. We can hope for aggressive riding already on Pailhères but the smart money is on a more conservative stage as riders come in uncertain of what level they're on.

Nairo Quintana: Let's assume Movistar want to put Sky under pressure from the start. They have high hopes for Valverde, and perhaps also Quintana (and Costa.....?) but they need to ride aggressively and take every opportunity to test Froome and his team. Quintana has a role to play in this and it could put him in a position to win the stage.