Mara Abbott again - Giro Rosa Stage 6, with all kinds of drama, and a surprise DQ...

On another hot and beautiful day in spectacular scenery, the Giro Rosa entered the final mountain day, where Mara Abbott of the USA National Team would fight to keep the maglia rosa, while the rest of the General Classification contenders would try to stop her. Once more, the best climbers in the world were demonstrating their abilities, but there was a different kind of shuffle in the GC, with a surprise disqualification at the end of the stage - while the middle of the race brought the most touching moment of the Giro so far.

Share All sharing options for: Mara Abbott again - Giro Rosa Stage 6, with all kinds of drama, and a surprise DQ...

As usual, I will edit in videos and links as I find them - keep an eye on the comments for things that are updated and added.

Official race video with English interviews with Mara Abbott, Claudia Häusler and translations of the Italians

To watch the full 50 minutes of the RAI video, which is on Youtube in 4 parts, either start at Part 1 and let the playlist run through, or watch in parts. Part 2, with that adorable Elisa Longo Borghini moment from about 2:50, Part 3 and Part 4:

Like Stage 5, the route finished on a long climb, but it was a different kind of parcours. The stage, in the most northern province of Italy, Verbanio-Cusio-Ossola, started from Terme di Premia, 800m above sea-level, with 20km of descending, before running for around 40km along the Toce valley to the western tip of Lake Maggiore, and then back again along the other side of the river, before climbing for around 11km to the ski resort at San Domenico - 121km in total.

Once more it was fast from the start, with Marianne Vos (Rabobank-Liv/giant) attacking almost immediately. This was typical Vos - although she had lost the maglia rosa after Stage 5, and was 3'20" behind the new race leader, Mara Abbott, she wasn't going to give up without a fight, and while it was very unlikely she'd stay away, of course she had to try. Despite the fact this was a tactic everyone must have been expecting, only three riders went with her - Valentina Scandolara (MCipollini-Giordana), who's attacked on every stage, American sprinter Shelley Olds (Tibco), and racing to support her Rabobank team leader, Lucinda Brand. But although they gained time, the descent wasn't technical enough to let them gain any real advantage, and with a very fast pace - averaging 49.4kph in the first half an hour - the peloton swallowed them up once the road flattened out.

The break stayed away until the last 10km. The USA National Team, had kept tight control, even though there were no threats to their maglia rosa,and the break was caught within the first few kilometres for the climb. From here it was all about the climbers. Where yesterday's climb was a relentless drag, this one, although, as Jens told us in his stage preview, was an average 7.8%, with the last 4km being the most difficult.

A group of around 18, with most of the GC top 10 soon thinned out - Vos was dropped, but came back and was dropped again, until it was Mara Abbott, Fabiana Luperini (Faren), Evelyn Stevens (lululemon), Best Young Rider Francesca Cauz (Top Girls Fassa Bortolo), Claudia Häusler (Tibco) and Tatiana Guderzo (Cipollini) - a group with 7 Giro and a World Champion's title between them. Once again Abbott's attack was the only one to get away, despite Stevens trying to follow - she broke away in the steepest last 3km, to win solo, taking her second stage and, barring disasters, the overall maglia rosa.

The chasers suffered up the climb behind her - while Vos took advantage of the places the road flattened, to make sure she didn't lose too much time

Cauz cemented her lead as Best Young Rider, Abbott overtook ORICA's Tiffany Cromwell in the Queen of the Mountains competition, and Vos kept her lead in the Points competition.

You may notice something from the results - the lack of Fabiana Luperini. She had finished fourth, just behind Cauz, but at the end of the stage, the first five riders had their bikes weighed and Luperini's was found to be under-weight, 6.6kg instead of the regulation 6.8kg - and the 39-year-old five-times Giro winner was disqualified from the race.

It may seem pedantic to disqualify a rider for their bike being just 200g under the weight limit, so I asked Stefan Wyman, the DS of British team Matrix Fitness Racing Academy to explain the rule:

The weight of a bike is very important, especially the moving parts. The UCI weight limit was, I believe, introduced to ensure bikes didn't sacrifice strength in the search for reduced weight. Since the weight limit has been introduced technology has continued to improve and it's now very easy for a bike to be below the weight limit. The regulation though is simple, it's 6.8 kg for a bike. You know if your bike is below the limit, and there is no excuse for a professional team not meeting the requirement.

If a bike is below the limit, you would normally see a team increase the weight by adding weight to the non-moving parts. For example bars, posts and seat posts. For light riders, like many of the female professionals, weight can be particualarly significant. There is an argument that there should be a lighter limit depending on the rider's weight, but while there isn't, everyone needs to stick to 6.8kg.

Depending on the weight of the rider, and the reduction in weight of the bike, there can be big differences expected. There have been several studies that can be seen, if you google the subject. For, let's say, 200g, you won't notice too much, but when you start to get to 500g, that could mean quite a few seconds over a long climb. Certainly enough to put a huge deal of pressure on a competitor in a race going over several climbs, such as the stage in the Giro.

A lot of riders won't actually like the handling of a bike that hits the scales at around 6kgs. But, given that some female riders are sub-50 kg, the handling is very different to them. Having not been sub 50 kg since I was 8 years old I can't really comment on that, but there are clear advantages to a lighter bike.

The bikes are usually weighed at the start of the stage, so the mechanics can rectify any issues, but the race jury can weigh any bike at any stage in the race - and because of potential deliberate shenanigans they may do this after the race (general cycling legends include stories of mechanics filling handlebars with ice to add weight, or swapping wheels etc between weigh-in and start, or riders having "mechanicals" before climbs and swapping to lighter bikes). There's absolutely no evidence to suggest whether Luperini's bike was too light because of accident or design, but the bottom line is clear - the mechanics know they should be ready to prove the bike is within the rules at any point in the race.

Update! In her Stage 6 video review, pro-cyclist Amber Pierce discussed issues of bike weight, and the relationships between riders and mechanics. It's very interesting - listen to her!

From polemica and Luperini's frustrations to emotion of a very different sort. The other big story of the day was Elisa Longo Borghini. One of the pre-race favourites, she fractured her hip in the Italian National Championships, a week before the Giro started, and although she hasn't been able to race, she's been following the race while her fractured hip heals, and tweeting encouragement to her team-mates and the peloton. At the half-way point, today's race passed through her home-town, Ornavasso, and she was out on the road-side at the intermediate sprint-point, cheering everyone on... 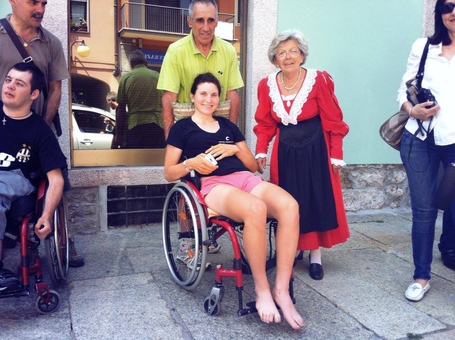 with the race dedicating the stage to her 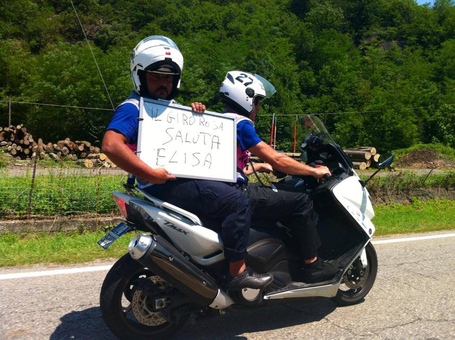 and her team, Hitec Products UCK got on the front of the peloton to salute her as they passed, the whole bunch smiling and waving to her as she cheered them on. The Hitec staff took a moment to leap out of their cars to greet her and her family - it was a moment full of emotion, as the whole race took time out of the competition to honour a much-respected rider who, but for bad luck, should have been racing.

I have no words for describing how happy I am for having seen the @GiroRosa2013 peloton! Thanks to everyone! This is why I love cycling!

Seeing @ElisaLongoB smiling on the roadside in her home village gave me goosebumps!

Nice to see @ElisaLongoB waving alongside the road today @GiroRosa. Sad for her to miss this one, but she'll be back strong. Good recovery!

And Anne-Marije Rook very kindly translates for us again, from the Rabobank race report and video, that Vos gave her present from the stage, a basket of local delicacies, to Elisa's family:

Everyone experiences a crash but you don't wish that on anyone. I hope she'll be back soon. I don't know if the sausage and cheese will help the recovery but I hope she appreciates the gestures."

This is one of the lovely things about the sport - riders who are fans, team-mates who are friends, and rivals who wish some big competition was in the race - one big "family". And it's very typical of the race. The official 'madrina' of the race is Marina Romoli, a promising young Italian cyclist, silver medallist in the 2006 Junior Road World Championships who, in 2010, when she was just 21, had a terrible crash in training when a car pulled out in front of her, leaving her in a wheelchair. Romoli has been adopted by the race ever since, and this year each jersey bears the emblem of her Foundation. These are the moments that make the Giro special - not just the punishing stages and explosive riding, but the feelings at the heart of the race.

There are just two stages to go. Stage 7 is pancake flat, and while on paper it's made for a bunch sprint, the peloton will be remembering last year's similar Stage 5, where Tiffany Cromwell attacked early and spent over 100km out solo, winning by over 8.5 minutes, so while the sprint teams will be looking for glory, so will the opportunists. Then, the final 16km ITT - and while Abbott lost 1'25" to stage winner Ina-Yoko Teutenberg on the similar Stage 3 in 2010, that doesn't look enough to upset her lead. But this is cycling, and as today showed us, anything can happen....

Read about the stage, including that Elisa moment, in my Q&A about Stage 6 with ORICA's Amanda Spratt, with Amber Pierce's video review of the stage - and if you have questions for Amber, or ORICA's Jessie Maclean, ask them in the comments.

There are team reports from ORICA-AIS, Rabobank (scroll down for Vos talking about how much she respects Longo Borghini) and MCipollini, and blogs from Sabrina Stultiens, who had to DNS today, Tiffany Cromwell, Gracie Elvin, Lucinda Brand

Stage 6 photos on the Giro Rosa facebook, race report by Ben Atkins on Velonation, and photos on Cyclingnews.

As always, come back to the comments for updates on everything we find, and to talk Stage 7. And if you have any questions, ask away - there, or on twitter.