Three stars of the Tarn

Another cracking day in the Tour. Not the breakaway day that some whackadoodles predicted but something else entirely. A hardfought day with a hectic sprint and a worthy winner to finish it off.

Share All sharing options for: Three stars of the Tarn 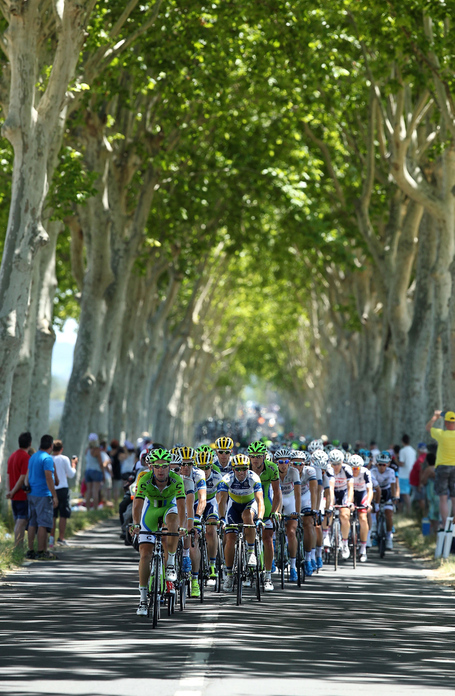 Not much comment needed at this point. What they did today to put Sagan in a position to win the stage with his worst competitors out of the picture will go down as one of the major achievements when we summarize this Tour in a few weeks. Some efforts are just of the kind that are remembered for a long time.

They had a plan, they went to the front early , pushed and pushed to put their rivals out the back one by one and as the opposition scrambled a defense they kept on pushing. And went on and on. Even the concerted efforts of Lotto, Omega Pharma and Argos couldn't put much dent in the gap Cannondale had built and eventually they broke. They just plain broke straight up and down. Three of the strongest rouleur teams in the race just sat up and acknowledged that they had been beat. And then Cannondale pushed some more to reel in the counterattack and do a pretty respectable leadout. Unbelievable. 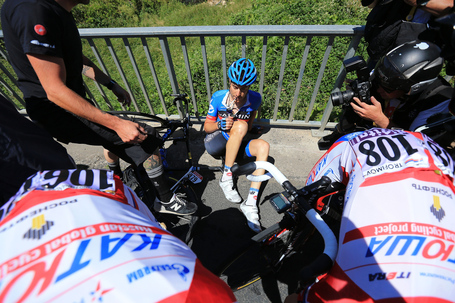 In a way it was a fitting end of the Tour de France career for a rider who seems to be more struck by crashes and poor luck in the Grand Tours than almost anyone else. Still it was sad to see Vande Velde leave his last tour out the back door.It has been an anonymous season for him since his return from his vacation-style ban but by all accounts he was an important piece in the TTT the other day and he would have been invaluable for the team's young GC hopes further down the line. But, like so many times before, it wasn't to be. 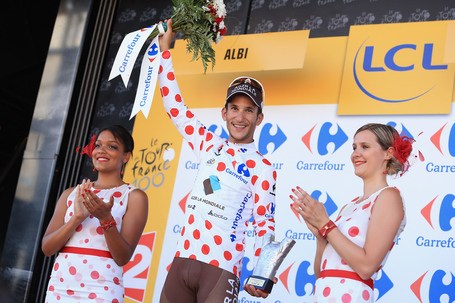 Some fight for freedom, some fight for glory, honor and the American way. Today Ag2r fought the good fight. They fought for the preservation of good taste, style and class. The valiant efforts of Blel "Kadrius" Kadri and his trusty sidekick Romain Bardet to keep Pierre Rolland out of the most hideous polkadot-shorts the world has ever witnessed, for one day at least shall not go by unforgotten. Kadrius attacked in the early break, like the gladiator he is, to go for KOM points and he did just that.. He managed to pass Rolland in the standings but just then, as we drew a sigh of relief, the polka-shorts counterattacked and looked like they could take the last points to save themselves. A team with weaker resolve might have admitted defeat at this point but this is where Bardet stepped up. Determined to end the evil reign of poor fashion he latched on to Rolland and poached the crucial points. Because that's what kind of man he is.