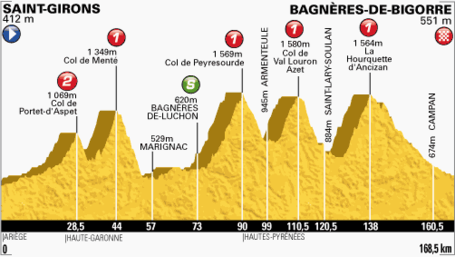 The classic multi-climb Pyrénées stage. For added interest the Tour has avoided the (too) often used standard climbs in favor of less used terrain. It's short but hard. Today could go either way, either a relatively comfortable day were a breakaway is allowed to contest the day or pure hell if GC contenders decide to make this a battle-ground.

It's the Tour, a Norwegian has to win a stage at some point. The Norwegian Climbing Sensation has forewarned that he will try an attack today so this might be their best shot.