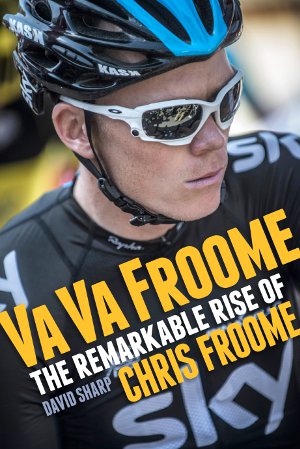 Former Procycling deputy editor and sometime Rouleur contributor David Sharp's Va Va Froome tells the story of how a kid born in Kenya has climbed his way from the Highveld to the even higher podium of the Tour de France. From mountain biking in the Rift Valley to riding for the South Africa-based Barloworld and then British-based Sky, the twenty-eight-year-old Chris Froome has come a long way, and Sharpe tracks the route the Briton has taken in this first biography of the man who has already tipped himself to win seven Tours de France.

So what do you have to do to win this book? Answer a simple question, that's what. And that question is this:

a) he donned a yellow waistcoat;

b) he sported a green armband; or

c) he dyed his moustache red?

Answers below or on Twitter using the hashtag #VaVaFroomeCompetition.

Competition closes noon (BST) Wednesday and winner will be announced here and on Twitter (@fmk_RoI) during the time trial to Mont-San-Michel. Usual rules apply, winner is first name pulled out of the hat, judges' decision is final, there will be no revising of the results seven years from now no matter what happens.