The Giro Rosa was over too soon! With the General Classification all tied up, the final ITT was all about the Very Fast Women - and all eyes were on Specialized-lululemon. They hadn't had much luck in this tour, but the final stage gave them a chance to shine - and they seized that with both hands!

I'll edit it more video and links as I find them.

For the full hour of video, either start with Part 1 and let the playlist run, or watch in bits - Part 2, Part 3 and Part 4 - with the podium and post-race fun:

The course in Cremona, the 2013 European City of Sport, was 16.7km long - pretty much flattish, but ending on the cobbled streets - perfect for the power riders. And one name stood out from the startlist - Ellen van Dijk.

Her team, Specialized-lululemon, has been having a very mixed year. On the one hand, a run of really horrible accidents hit them - star sprinter Ina-Yoko Teutenberg crashed hard in the Drentse 8 in March, and the head injuries she sustained there have meant she won't be returning to the peloton this season. Then a few weeks later Evelyn Stevens crashed in the Classica Città di Padova, breaking her teeth and needing facial surgery. She had to miss defending her Flèche Wallonne title, and was back on the road for Gracia-Orlová. Then Trixi Worrack broke her collarbone, and the Giro was only her second race back - the first being when she won the German Road Championships. But through all that, the team have stuck together, working hard and keeping their spirits, and results, up. Ellen van Dijk has more than accepted the challenge life's thrown at the team, finishing on the podium of every Road World Cup she's raced and sitting third in the rankings.

The tall Dutchwoman has always been a star, with World Championship titles to her name, on the track in the 2008 Scratch race and in the 2012 Team Time Trial, but this year has been the first time she's been so strong in the hilly races, after a winter of training. She's still only 26, and evolving as a rider - and with so many colleagues out of action, she really took the role of lead rider and ran with it. But would the new skills mean a reduction in her ITT skills? Winning the Dutch ITT championships the week before the Giro, she looked just as strong as ever!

The early leader was Van Dijk's young team-mate, Tayler Wiles, whose time of 2'22".07 stood as fastest while 70 riders finished, until Rabobank's Pauline Ferrand-Prévot - the young French ITT Champion and 2010 junior World Road and Mountain bike Champion finished with 22'09".87. Ferrand-Prévot didn't get to enjoy her lead for too long, as Van Dijk started 3 riders after her.... and destroyed the field with 21'12".31. This looked like a winning time - now all that was left to see was how the last 20 starters would affect the General Classification.

Mara Abbott of the USA National Team had got her maglia rosa sewn up. When the race hit the mountains on Stage 5, she rode away from the competition up the brutal, seemingly-endless climb, and lead the GC by +1'27" on 2009 World Champion Tatiana Guderzo, and 1'34" on 5-times Giro winner Fabiana Luperini. After the second mountain day on Stage 6, Luperini had been disqualified, and Abbott's stage win had extended her lead to 2'40" to Guderzo and 2'55" to 2009 Giro winner Claudia Häusler. After Stage 7 ended in a bunch sprint masterclass, there was no chance of Abbott's win being taken away, and the day was one of celebration for the Americans. 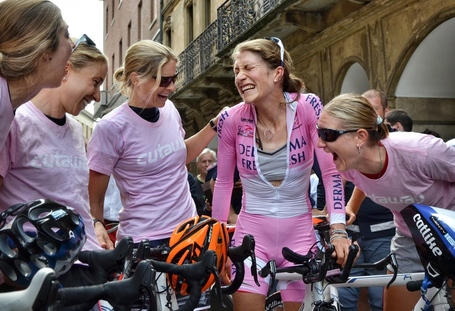 But there was room for change in the rest of the Top 10 - especially for Shara Gillow (ORICA-AIS) starting the ITT in 5th and Evelyn Stevens in 8th, who both put in spectacular times, to make up a very happy podium.

These results caused a shuffle in the GC, with the Giro's surprise break-through rider Francesca Cauz dropping down the GC from 4th - but keeping her Best Young Rider jersey would have more than made up for i.

The final podium had so much pedigree - two former winners and a former World Champion. Abbott had won the Giro in 2010, but the following year left cycling, with a combination of issues including spiralling anorexia, got too much for her. Bonnie Ford has written movingly about how she returned to cycling - and she was clearly delighted with her return to international racing. And Claudia Häusler's third place was another joyous return to the top - after being Abbott in 2009, Häusler crashed in the 2010 Giro Toscana, with a concussion that kept her out of that year's World Championships. it took her a long time to recover from that - and she's been focussing on completely her Mechanical Engineering degree, but this Giro proved that put big mountains back in races, and we'll see Häusler shine again! 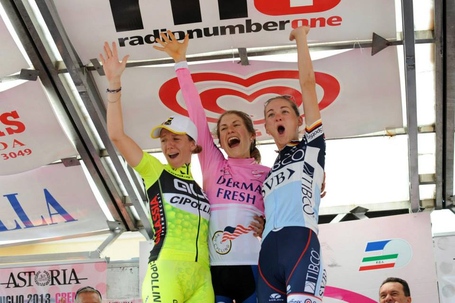 Look at Sean's amazing fan-view photos on Velofocus, they're really great - and more photos on the Giro Rosa facebook album. There are more race reports by Ben Atkins on Velonation, by Jen See on Bicycling, and on the prize disparities on Velonews, a race report and photos on Cyclingnews, and photos by CJ Farquharson on womenscycling.net and CJFoto. Saul has a review in Spanish on Cobbles & Hills.

Some rider blogs by Tiffany Cromwell and Lucinda Brand.

If you see more blogs and videos, add them to the comments - and I have a question - what have been your favourite moments from this year's Giro? I'll be back with a round-up of high-points very soon!