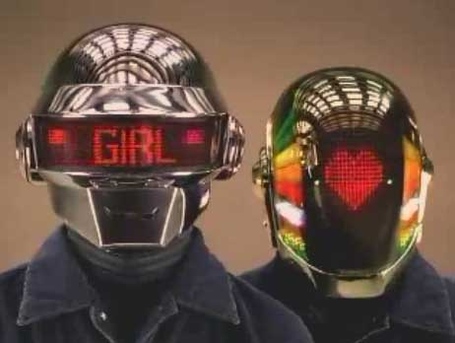 Which reminds me, a little background to people who haven't experienced Daft Punk in their caves lives. They are a French dance music production duo who specialize in techy and disco sounds, although it's maybe no longer appropriate to say they specialize in anything more narrowly categorized than "music." The two are Thomas Bangalter and the simply-named Guy-Manuel de Homem-Christo. In real life, they're just as intriguing, having gone to great lengths to conceal their faces, explained variously as shyness, an emphasis on the merging of human and electronic components, and the result of a bizarre sampler accident. Bangalter: "We did not choose to become robots. There was an accident in our studio. We were working on our sampler, and at exactly 9:09 am on September 9, 1999, it exploded. When we regained consciousness, we discovered that we had become robots." Good to know.

Anyway, with their Parisian roots and their lives devoted to dance music, it seems probable that there's a Tour de France connection. After all, the Tour is all about techno. And I can find at least one very excellent alleged Daft Punk remix of Etape 2. I may be wrong, but I imagine right now Thomas and Guy-Manuel have figured out a way to replay Sunday's stage inside their robot helmets.

With that, let's scroll through a review of Daft Punk's new masterwork, Random Access Memories, and explore how each track explains life in a way that reminds us of a particular rider or other element of the 2013 Tour de France!

Give Life Back to Music

Let the music in tonight

Just turn on the music

Let the music of your life

Give life back to music

The opening track on the record is an upbeat, pleasant one, lyrically simple and with a nice heartfelt message: let the music into your heart, and in turn this gives life to the music. Symbiosis FTW.

And this one goes out to Jan Bakelants. Really, it describes very nicely all the winners of the combativity award, and those who should have won it too. But Bakelants is the ideal representative, the guy who has given, and the race has given to him.

The Game of Love

And it was you

The one that would be breaking my heart

When you decided to walk away

This mournful tech-ballad is about the elusive nature of love, and goes out to Damiano Cunego. Riding anonymously in this Tour, twenty-two minutes in arrears, Cunego's career is heading slowly toward its conclusion -- slowly, as if it were a flat time trial -- without that elusive grand tour, aside from his first Giro, an odd affair featuring few climbs, prison stripes, and an uncomfortable alliance with Gilberto Simoni. One grand tour is better than none, but the kid had style, he had promise. Major wins happened, but almost entirely in Italy. Second in the worlds in 2008 (when Ballan galloped off), a career-best sixth at the 2011 Tour. He's had a respectable run by all accounts, but the Tour, it's always broken his heart.

I knew that it could be a sound of the future but I didn't realise how much the impact it would be.

Possibly the most important or at least explanatory track on the disc -- and by explanatory I mean musically, not literally. The track opens with an interview with Giorgio Moroder, who in talking about his relationship to the "syntezizer" sounds like a character from "That's So German!," my hit reality-TV show (proposed). It continues by creating a very Moroder-like tribute track that, frankly, kicks ass.

And since this is about the sound of the future, this has to be about Nairo Quintana. The 23-year-old Colombian has put the cycling world on notice that his potential is very real. This shouldn't surprise anyone who's been paying attention, but for anyone who wasn't before last week, they are now. The kid is gonna go big. Any moment now.

I've been, for sometime,

I need to know now

Please tell me who I am

Another downbeat number, confronting the confusion and complexity of life. The protagonist is spinning, and while nothing is new about that, the synth-vocals bring a chill to the track that a human voice couldn't quite convey. Well, no ordinary one could, that's for sure.

Nobody is spinning more visibly than the Vacansoleil-DCM squad. Nobody in the top 20 on GC, nothing happening in any other classement. The sponsor has already said they're finished, and no white knight is on its way, as far as I know. They brought a teenager, Danny van Poppel, who's done well with this opportunity, and maybe that's a way to repay a sponsor who emphasized the team's Dutch character -- give the kid an early break, maybe it goes somewhere big. But the team is gonna start disbanding very soon, if it isn't happening already. Who are Vacansoleil at this point?

Now I thought about what I wanna say

But I never really know where to go

So I chained myself to a friend

Honestly, I'm not sure what to make of this track. It's great stuff, but the lyrics are a little hard to break down. Seems to be about confused relationships. So for that I'll dedicate this one to Alejandro Valverde. Maybe things will become clearer and all will be well. Maybe Valverde's connection to Quintana is the ace up his sleeve. Or maybe Quintana has the legs in the Alps, and Valverde doesn't. Valverde's forte is more aligned with the Pyrenees than the Alps. Maybe Valverde has chained himself to a friend who doesn't intend to stay shackled. Make some popcorn for this one.

Lose Yourself to Dance

Here, take my shirt and just go ahead and wipe up all the

Easy one -- to all the domestiques, who give the "shirt off their back" for the team -- not for the team leader but for the teams fortunes, as expressed thru the leader's success. I know it's just a job sometimes, but in sports we often talk about players "buying in" to a team's plan. Sometimes we talk about that in cycling, but not too often. There's no "i" in Tour de France.

To Ted King and Jurgen Van Den Broeck. This track is almost what the five stages of grief sound like: emptiness, fear, attempts to make sense of it, catharsis, and a determination to fight on. King, in his first Tour, went home in agony, physically and emotionally, over his dramatic and befuddling exclusion. Same with Van Den Broeck, who could be forgiven for shaking his fists at the Gods of Cycling every ten minutes or so these days. Relatively speaking, the bad luck incidents have been few, but in at least two cases, very agonizing. Hopefully both riders can emerge from the torture of their circumstances resolved, with the bond to the bike unbroken and better days ahead.

She's up all night to the sun

I'm up all night to get some

She's up all night for good fun

I'm up all night to get lucky

Love this track. And I'm hardly alone, it's pretty much everywhere. The infectious pace matches well with the storyline of a guy who seemingly mistakes the positive vibe coming off the object of his desire as some sort of connection with him, some sort of chance that he might get lucky. Yes, I know it's fiction, but my interpretation of this dynamic is that she barely knows he's there. And yet, his hope isn't pathetic, it's normal... and naive.

Hm, this one feels like the Belkin squad, who currently have Bauke Mollema sitting third overall and Laurens ten Dam fourth. The latter is a long-time loyal soldier of the Dutch cycling megasquad, with the class of a top-30 or top-20 GC rider. If this is a day when it all falls into place, one can see ten Dam in the top ten. Good course for him, and less time working for others compared to past years.

Mollema is more intriguing, as a top climber on a climber's course. But his best grand tour is 4th in the Vuelta, and no results of note at the Tour. Do we really think this is going to hold up? Well, anything's possible. But my guess is that the party will keep rolling around France, and ultimately be somewhat indifferent toward the Belkin boys.

There's no such thing as competition

To find a way we lose control

Remember, love's our only mission

This is a journey of the soul

The dream of perfect love is out there, for the person who seeks it with a true heart. So, Chris Froome, is this your moment? I think Sky have a lesson to learn from last year and Sunday as well. The clinical control is no way to achieve your dreams. OK, you have to use your talents to their maximum effect, but Wiggins' win is already being looked on with some disdain. He got one, thanks to all the crono miles and a complete stranglehold put on the race by his team. Not that he's unworthy, but the Tours that evoke lasting memories are the ones won with heart. Froome came here to win by the Sky textbook, but that's possibly out the window now. Now he has to win with heart. So far, so good.

The nothing song has to go to Joaquim Rodriguez. It's very pleasant if you pay any attention to it. But the lack of a hook is hard to ignore. OK, for this album maybe we need an amuse bouche, before plowing ahead. Sorry, Purito, but that's what your Tour reminds me of so far. I am only vaguely aware of your presence here.

Turning our days into melodies

These fragments of time

This light-hearted number about someone carrying pleasant memories around goes to Cadel Evans. Evans carries himself like a former champion, riding where he wants / knows he needs to be, except for the heat of battle, where his legs don't seem to have the snap left in them needed for a win. I'm sure he wants a result here, but it's easy to picture him knowing what he's accomplished and being at peace with this Tour, wherever it goes.

If you lose your way tonight

That's how you know the magic's right

That's how you know the magic's right

This song is about drilling it (ahem!) and so it goes to the Cannondale Boys. No team can say they're as completely on track toward their goals as the lime greens -- or at least, no team with big ambitions. [Orica-GreenEdge can also say they've accomplished their goals for the Tour, but their story doesn't jibe quite as well here.] Given the naughty overtones, it's only fitting to pin this on Sagan and co.

As we look back at the earth it's up at about 11 o'clock, about maybe ten or twelve diame...Earth diameters. I don't know whether that does you any good, but there's something out there.

Indeed there is. The mystery of the Tour de France is usually one of the stars. Yes, last year she seemed absent, but think back just a little farther -- Evans' dramatic, grueling, inspiring win in 2011, Contador and Schleck battling dead even but for one jumpy chain, Sastre before that, and so forth. This year, it feels like there's something out there. Not sure what yet. Stick around.