Time for the Chrono men to come out and play on the only true specialists TT in this year's Tour. And it's a short one to boot.

Share All sharing options for: Le Tour Stage 11 Preview: Break out the stopwatch 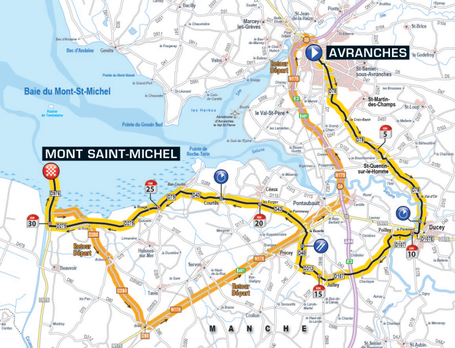 This, more than the mountains this year, is where overall ambitions come to die. We have plenty of guys who can go up hills quickly who are lurking in the top fifteen positions of the overall classification, but not all will stay there, or as high up as they are. This is where we learn if Nairo Quintana is a credible second threat for Movistar or if he becomes more of a fly in Sky's ointment and if Laurens Ten Dam and Bauke Mollema are on track for breakout Tours or are merely keeping fourth and fifth overall warm for more well rounded riders. Is this where Cadel Evans sneaks his way back into the picture thanks to the implosion of climbers ahead of him? And, finally, we see just how much of a buffer Chris Froome will carry into Ventoux and the Alps next week - will it be insurmountable minutes, or a less daunting two minutes and change?

The stage profile suits Froome best among the overall contenders, rolling every so slightly in the first half and then smoothing out for the latter half. If you remember, Froome nabbed a shiny bronze medal in the Olympics in the time trial last summer on a similar, if longer, course. Among the other overall contenders, Valverde is likely the second most pleased with this. The Movistar rider can TT pretty well (or at least suitably decent) over shorter distances like this. But, really, this is a playground for the specialists, a la Tony Martin. So tune in to watch him, then check back to see the last 15 riders go off, if you want fun.

Tony Martin. World champion in the discipline and Cancellara isn't here to challenge him, so it's really stealing lunch money from the scrawny kids for him. Look for Chavanel to appear in the top five, perhaps.