Round three of the Bag Wars... and we have a winner! Plus modular storage and maybe some really boss locks

Since the gear reviewing business has no beginning and no end, I'd like to sprint thru a few items in store for this week. Today's grab bag is a nice combination of ... quality.

I get that I'm only skimming off the cream of the bag world, but I think I get all the options now... and in sampling enough of them I can tell you what I actually like. I mean really, really like.

Background: there's a different bag for everyone. Riding fast and/or care about weight? CHROME makes the Cardiel, weighing less than a pound and performing solidly enough. Live in a hot-weather place? The Boreas Lagunitas has innovations you'll want to consider. All about fashion? Shoulderbags. CHROME comes recommended, again, but they have plenty of company.

Live someplace where you commute half the year in darkness and rain? Here again, it's CHROME getting it done, this time with the Bravo Night. After demo-ing all of the above, I officially have a winner. 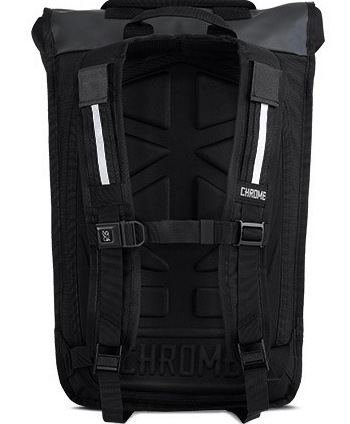 The Bravo Night is a twist on the Bravo, a sturdy roll-top bag with an emphasis on waterproofing, structure and comfort. The Bravo is cross-strapped across the face of the bag, for hauling spare wheels or a frame, and for compressing the back when not being used in its fully extended mode. I personally tested the waterproofing by spilling a nice raita I had made for myself, and the test was completely successful (as was the raita). The bag didn't so much repel water as it ignored it. The Bravo seems utterly indifferent to moisture.

The roll-top is functional and extends pretty high for hauling large pieces, but when rolled up it doesn't tuck under your helmet and piss you off. The harness is solid and comfortable, including a miniature version of the seat-belt buckle for fun. Stitching looks very solid, as does the shell. First class all the way.

Oh, and it's made with reflective material on the back and the straps too, making you visible at night from 100 meters away. I've hunted around briefly and can't seem to find anything comparable. It probably exists... but this is great execution. Add a be-seen light and nobody will miss you (from behind you, which isn't exactly the issue, but OK).

This bag is a winner across the board. Frankly, it's the most comfortable experience I've had since this bag-reviewing project began. And it makes sense for me on so many levels. I ride in the dark from October to April. I ride in the rain. I carry electronics I don't want to get wet. I don't care about weight on my commute. I occasionally drop off a wheel at my shop on the way in to work. Unlike everything else I've demo'd this bag feels like I need to stop demo-ing other bags. Like I said, different requirements might take you in a different direction, but I'm done.

Cycling and torture have a long and mutually profitable history, so it was only a matter of time before someone went out and used it for marketing. Enter Feedback Sports, who are rapidly becoming major players in the storage of bikes. For a company that didn't exist, they're now everywhere. Each stop of the RAMROD last week was positively festooned with their A-frame racks, holding 8-10 bikes per. I talked about their repair stand last December (best stand I've ever used). Naturally, the next step is home storage. Enter the RAKK. 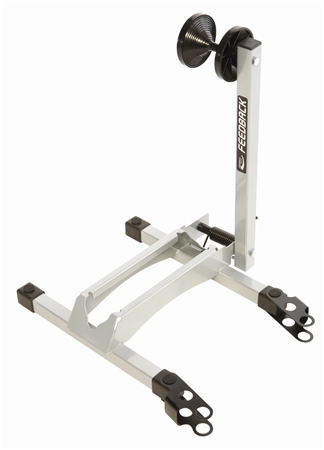 The RAKK is a modular floor storage for your home -- individual stands which can clip together for handling your family of bikes (see that little apparatus on the lower right? It's a male-female connection, very easily made). The vertical arm is spring-loaded and the bottom slot as well as the wheel at the top are angled, all of which adds up to the ability to store all sizes of wheels, rather firmly. As on-the-floor storage goes, it's as small and unobtrusive as it gets, barely bigger than the space required by the bike itself.

Used solo, it's terrific. Right now mine is in the garage holding up a kids 16" bike, but before it got banished into its mundane storage role, I used it to hold up my new bike while I re-wrapped the bars. The spring loading held it nice and steady, making it a work stand for repairs done on the floor. I also used it to hold the bike steady while I completely made hash of a stem swap-out. My wrenching may have gone horribly wrong, but it wasn't the RAKK's fault.

Modular floor storage is a pretty good thing. After all, the proper number of bikes to own is N +1, so while you're stuck on N (the number you currently own), you might not want extra storage sitting empty, except perhaps to remind you that it's time for another bike. Whatever your destiny, the right number of bikes can be accommodated by the same number of RAKKs. Feedback and other companies make wall storage, and there again the choices only seem to grow. I personally own a mishmash of devices, and this is a nice tool to have in the storage toolbox.

ABUS locks, by the way. Things have gotten very interesting in the lock world with ABUS' invention of a folding lock that's as strong as anything out there. U-Locks have been stalwarts of the bike world forever, threatened only by thieves with 36" bolt-cutters, and with the advent of better materials even those don't always fly. Same with heavy chains. Smaller locks are available, like frame locks and cables, but the convenience trades off with security.

German manufacturers ABUS have hit on a great compromise: a folding lock that's as strong as the rest and much, much more convenient. Not lighter -- 1kg is about what you can expect from a U-lock -- but then the weight and the strength go hand-in-hand, unless you feel like paying for titanium. But size matters, and the folding locks, e.g. the 6100, shown here, can fit in your pocket. ABUS rates them as "medium theft risk," so I gather it's not quite as hard to crack as a U-lock. Anyway, I'll have one in hand shortly and let you know how it goes. I will be baiting it with my new titanium frame bike, and will leave it in front of Safeco Field after the Mariners lose. If it's still there in the morning, you'll know the lock is solid.