Did Anyone See This Coming?

Zdeněk Štybar's transformation from Cyclocross to road is officially complete.

Share All sharing options for: Did Anyone See This Coming?

We thought he might be pretty good. You know, at the shorter stuff, with his raw power and bike-handling savvy. Crossers are good like that. I guess if we thought about it we could see him being a useful teammate to his Omega Pharma-Quick Step mates in shorter, tough races like Gent-Wevelgem or de Ronde. Certainly something less demanding and less competitive, like the ENECO Tour.

And then April happened, when after more than six hours of racing Zdeněk Štybar -- former 2x Cyclocross World Champion, adopted Belgian, international Man of the Mud -- was among the final three riders gliding across the tops of the baby-head cobbles of the Carrefour de l'Arbe. It was a performance that could scarcely be explained, though if you tried hard you could maybe see it. 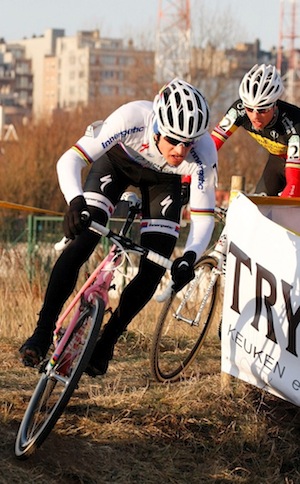 Don't go looking for old road palmares; they don't exist. But examining the present, Stybar was 27, hitting his prime. His transformation from short and insane to long and insane was going well, via the traditional route for up-and-coming Klassikers: the previous year's Vuelta a Espana. He'd ridden a very tidy Vuelta last fall, moving up on the flat stages and keeping his head above water on the climbs. On the penultimate stage to Bola del Mundo, he'd come in 63rd, showing a persistence at the end of three weeks reserved for true road pros, and pretty respectable climbing chops for a guy with his profile. If you looked closely enough, you could see that Zdeněk Štybar had arrived.

Yesterday was confirmation of all that, and more.

The ENECO Tour isn't typically regarded as a tough race, but this year's edition was intended to change that. After some rolling and flat days, the race moved into high gear with a short time trial, followed by a pretty significant romp around the Ardennes with multiple trips up the Cote de la Redoute, followed by a hard day in the Flemish Ardennes and a circuit around Geraardsbergen. A mix of pure power, climbing power, and cobbled climbing power. The key word here is power. Štybar was spoiling for a fight and showing good form after missing the Tour de France, thanks to a knee problem that knocked him off the bike (via the surgeon's knife, or laser, or whatever) for three weeks. His time trial performance wasn't exactly helpful, placing him half a minute out of the lead, but for once the ENECO Tour might not come down to a handful of seconds.

And it didn't. The general classification got a thorough sorting on La Redoute, as one would have hoped, and only two riders were left standing by day's end: runner-up Štybar and main protagonist Tom Dumoulin. The young Dutchman -- at 22, someone we may be discussing for a long while -- showed his youthful exuberance/indiscretion by dragging Štybar into position for the second-place time bonus, in an effort to eliminate other rivals who were already eliminated. A mistake, probably, but the eight seconds might not kill his chances.

They didn't -- but only because Štybar taught Dumoulin and everyone else a lesson on cobbled aggression, attacking in classic style from 5km away, joining a rider up the road (Ian Stannard), and forming a dynamic duo all the way to the line. Štybar rode like a champion, bunny-hopping a curb on the left so he could cut hard through a right-hander, a sign of total confidence over caution. More to the point, he had enough left in the tank to finish off not only the stage but Stannard too. Štybar the sprinter. Štybar the climber. This was news. Big news.

If anyone saw this coming, let me know, and if so, how. Surely Patrick Lefevre saw enough evidence to sign him to a two-year deal in 2011, which covered the tail end of his cross career and the transition to road (a contract which expires soon, and though OPQS has enough Czech money to attract Štybar, they're going to need more of it now). We all saw the success of Lars Boom, something of a generational talent in Cross, as far as we knew from the Vlij-man's brief stay on dirt. Boom made a pretty respectable transition to the road, and his classics results have been trending upward -- along with a win in ENECO last year, but then we stopped thinking of him as an ex-Crosser years ago. Frankly, among recent CX world champions, there is no predictor of instant road success, and it's hard to see much of any road greatness anywhere in the list of CX rainbow winners without going all the way back to Jean Robic (CX champ, 1950). Yes, Roger De Vlaeminck won a silver in the CX worlds, but he was already a great on the road. As far as I can see, Štybar is ploughing new ground. 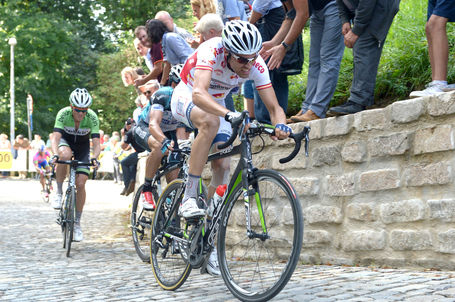