Prepping for the Vuelta? There's only one place to be right now. Well, besides Utah.

Share All sharing options for: Vuelta a Burgos: Last Taste of Spanish Mini-Tours

Five things you may or may not have known about the Vuelta a Burgos, which kicks off tomorrow and runs through Sunday...

Here's what I said in my survey of Spanish mini-tours, way back when:

Where: Burgos is a small province in Castilla y Leon, tucked between the Pais Vasco and Cantabria. It's also the name of the capital city.

Climby? I... I don't think so. Well, last year stage 5 was a beast, but otherwise it was just little bumps in the road.

Bottom Line: A lot of waiting around, then a big mountain day. Hmm... sounds like perfect training for the Vuelta a Espana!

Armed now with some actual details about the 2013 edition, I can tell you that it looks a lot like the 2012 edition. Well, not literally, but once again there is a rolling stage finish in Clunia (stage 2 this year) and stage 4 unites Dos Santos and Santo Domingo de Silos, both of which hosted stage starts last year. Also there's a Burgos-Burgos stage, this time #2 instead of #1. Almost none of that matters much from a fan's point of view, at least compared to this: the race-closing stage 5 is more or less a repeat of last year's, finishing again at Laguna de Neila, the highest point of the entire race after several other climbs, and the only truly decisive stage. Grafix: 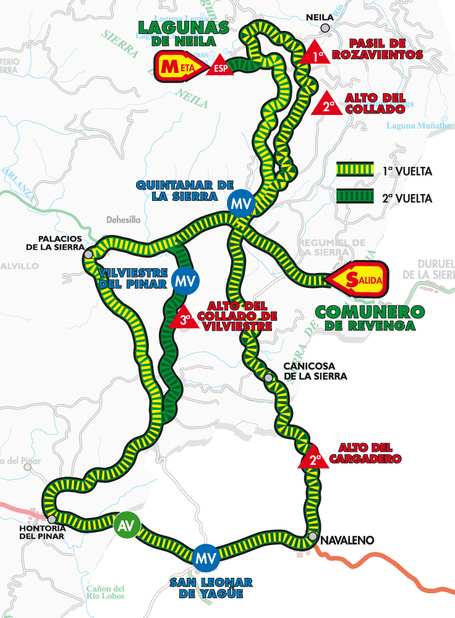 How is Comunero de Revenga not the setting of a kung-fu movie?

2. We Won't Know Much Before Sunday

Let's face it, the first four stages will not be memorable unless the riders do something special. And I can think of a few such results, like Euskaltel going off and getting ready to finish its long run in style. Or one of the Continental teams (Caja Rural, Burgos BH, NetApp, Euskadi and Colombia) seizing the race by the throat unexpectedly. But the terrain will encourage minor splits here and there, little more. Just enough to say we have a GC.

Still, you can't ignore the stages exactly. Last year Dani Moreno socked away seconds in dribs and drabs, and wound up the overall victor despite giving back 22 seconds on the last day. I guess the take-home message is, there might not be enough time available Sunday if you don't take care of business beforehand. To all the big names on hand -- the Movistar juggernaut, the Astana Vuelta-prep squad, et cetera -- take heed.

3. There'll Be a Proper Sorting Sunday

The stage to Lagunas de Neila is no joke. Here's a look at what I believe is your final climb, courtesy of Climbbybike.com:

It's not terribly long, but that's a pretty decent amount of time hitting double digits. Don't quote me on exactly where the finish line is, the climbbybike route goes to one of the lakes, Laguna Negra, while the title of the stage is just Lagunas de Neila, referring to the group of lakes up in the mountains. But the road up is the road up.

4. Someone Interesting Will Win

Right? Well, it's always interesting on some level, if either a star wins or, shockingly, one doesn't -- it's a high enough caliber race to feel this way. Last year's win by Moreno came at the expense of mostly the big teams, with Henao in second (amidst the Sky Clampdown) and names like Gesink, Anton, Visconti and Save Ferris up there. The revelations were notable as well: Johan Chaves was the Colombian Surprise of the Week, taking the final stage and third overall. Tom Dumoulin already had a WT contract in hand, but he showed his stuff to his future Raboblankin employers with a tenth.

Moreno and Katusha aren't back to defend -- Katusha are there but with a thin squad -- which puts the impetus squarely on Spanish mega-squad Movistar. Nairo Quintana is the anointed squad leader, though Visconti is around just in case, and in general the team is stocked with great workers -- Szmyd, Gutierrez, Herrada x 2, Plaza... completely loaded. The task of containing them falls largely on the forlorn Oranje, the soon-to-be-disbanded Euskaltel, who are launching Samuel Sanchez, with helpers like Urtasun, Landa and Verdugo by his side. Geography aside, we could easily see Astana take up the mantle, seeing as they have their entire Vuelta team in warm-up mode: Nibali with Aru, Brajkovic, Agnoli and co for protection. The only question is whether they want to get the engines warm enough, given their complete focus on late August. My guess is no, though expect Nibali to dig deep on Sunday, he needs the work. Sky aren't too loaded, for once. Colombia have Chalapud and Duarte, but I suspect the bigger names (Chavito, Atapuma) are prepping for the Vuelta a Quiznos. I suppose I should mention that Ivan Basso is here, though really it's just a bad habit I need to break.

5. The Race Won't Predict the Vuelta a Espana

Sorry, but Burgos isn't the Dauphine. Well, it's as close as it gets, I guess, but Vuelta Prep isn't the same as what we see in June. Everyone has too many miles in their legs already. Almost nobody is building form, and if they are (Nibali), they'll do so without much fanfare. Sure, if the final stage went to 2500 meters, it'd be a Vuelta-like free-for-all, but even then I'm not sure who would dig deep.

Still, the palmares says it's a big enough deal. Last winners before Moreno include Purito Rodriguez, Samu Sanchez, and Alejandro Valverde, the Holy Trinity of aging Spanish stage racers. Juan Mauricio Soler, a rider whom his fellow Colombians paid respects to at the Tour, bagged the 2007 edition, which makes you think the Colombians might win not merely out of habit but a bit more design. Quintana will be motivated to end his season well -- he's not on Vuelta duty -- so there's that, along with the dog-choking motherload of expectations he now carries around with him. If he porters the hopes of fans as effortlessly as he dispensed with the "pressures" of being a Tour newbie, then this race is already over.

Alberto Contador took a break from his twitter war with Oleg Tinkoff to ride the Gavia and Mortirolo with fans this past weekend. Doesn't sound like a guy about to bend to pressure to start racing again. Sounds more like a guy on vacation. And a pretty cool vaca too.

Oh, and RTVE renewed its broadcast rights for the Vuelta thru 2016, which I don't fully understand but surely such things are a sign of relative fiscal health, particularly for a race not often mentioned in the same sentence as "fiscal health."