Excitingly, the fearsome hors-categorie Grand Colombier is back (after a one year hiatus -- while it appeared in both the 2012 Tour de France & Dauphiné) in what should be a fabulous final stage.

L'Ain (named after the river that runs through it) is the French department just north/west of Geneva. Part of the Rhone-Alpes region, it also borders the Rhone river, across from the department of Haute Savoie. The French part of the Jura mountains are primarily in l'Ain - plenty of beautiful, virtually traffic-free, cycling climbs.

What do you need to know?

Prologue (Friday): Only 4.5 kilometres, but a little bit bumpy. To quote the official site: "This will be for a puncher."

Stage 1 (Saturday): 156 kilometres, quite flat through the Bresse and Dombes regions of l'Ain.

Stage 2 (Sunday): 149 kilometres, mainly flat but the route enters the Juras for some bumps including a first category climb 20 kilometres from the finish.

Stage 3 (Monday): 136 kilometres, a fun Jura mountains stage with a couple of proper climbs. The last 20 kilometres are unrated but almost always gently uphill. Much of this route featured in the final 2012 l'AIn stage won by Thibault Pinot. The GC favourites may make their first big statements here.

Stage 4 (Tuesday): The Queen stage featuring the "mythical" Grand Colombier. The route climbs one of the northern sides (there are four ways up this monster) and will descend the -- at times -- very steep and technical Culoz side (climbed during the 2012 TdF; and by Jens) on the way to the stage finish below. 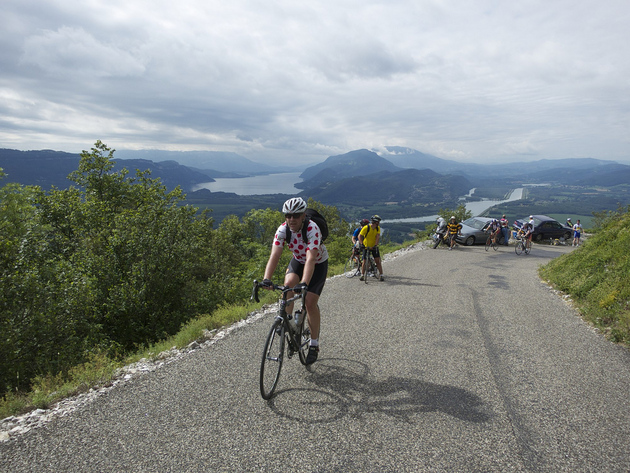 Why I Love the Tour de l'Ain:

This is obviously not the most important race in the world. But it is a wonderfully run, local event.