La Vuelta: Where Will It Happen?

La Vuelta is headed toward an exciting conclusion. When will the leaders play their ace?

Share All sharing options for: La Vuelta: Where Will It Happen?

The race looked like it was in the bag. For two weeks Astana and Vincenzo Nibali haven't had a bad day at the 2013 Vuelta a España, so to speak. Sure, they mumbled something about taking the responsibility for the race sooner than hoped, but before the pity party gets out of hand, let's just acknowledge that Nibali's biggest problem is that his rivals keep unexpectedly shipping him dozens of seconds. That would be Joaquim Rodrig-meh-z and Bah!lejandro Val-merde, two fine and stylish riders who've done nothing in the last two weeks to make you think they're about to win the Vuelta. Meanwhile, Nibali's closest rival, Chris Horner, is still old, and figures to be old all the way to Madrid. Nibali has it made. 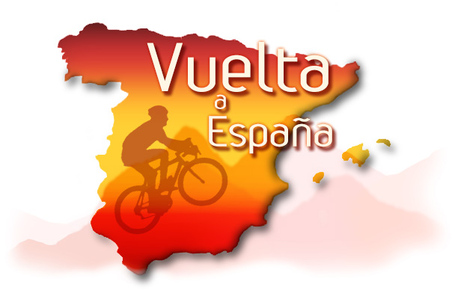 Ah, but then today (American for "yesterday") happened and suddenly the race is what the stat sheet says it is: a grand tour with 28 seconds separating the top two -- or if you prefer, the top four under three minutes -- with a brutal last week between here and the finish. Those 28 seconds, down from 50, suddenly look like nothing at all, and Nibali, at least for a moment, looked like a guy who could drop half a minute on a particularly nasty climb. Whether he does or not, we shall see. But as Nibali himself says, the rest day couldn't have come a moment too soon.

The 2013 Vuelta now comes down to a handful of stages, and presumably a handful of climbs. Let's dig in a bit deeper.

Forget it. Well, shenanigans are always a possibility, particularly with a foreigner in the lead (paging Robert Millar). And the weather will be nothing to write home about. But there are no rated climbs. Consider this Nibali's second rest day, except for the whole leader's-team-has-to-manage-the-race thing.

Probably the sneaky pick for the Vuelta's biggest day. Of the remaining stages, only one is harder on paper, Saturday's main course, but those mega-stages have a way of nullifying themselves sometimes. Should that prove less-than-decisive, the climb to Peña Cabarga has all the makings of a pivotal one. Grafix: 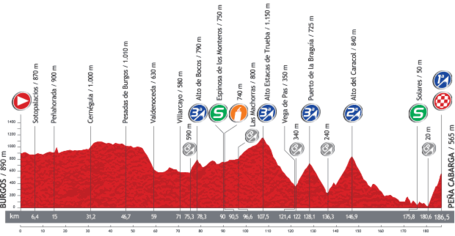 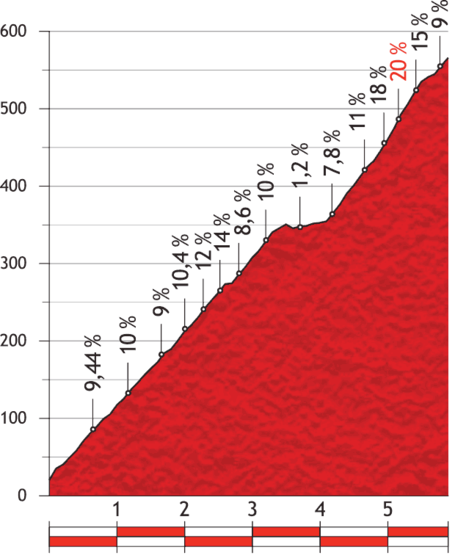 You couldn't pay me enough to climb that thing.* Apart from the brief dip in the middle, scarcely a meter of this climb is below 9%, and the average is probably around 13 or so. Such gradients are not friendly to mere mortals. Sharks, perhaps. Nibali has said he can't wait for some steeper climbs. The corollary to this is that Valverde and Purito are pretty good at the long, moderately-pitched stuff. LIke the first five climbs of the day. Given Nibali's proven ability in the steeps, particularly the not terribly long ones, he's gonna like this stage.

But so too should Horner. The American has a nice veteran team around him, and will no doubt appreciate the light schedule between here and Thursday. Also, if he won on the Alto Hazallanas, a 10% or so beast (and not to mention Snowbird), then this shorter but steeper climb ought to play to his strengths.

History: Two years ago JJ Cobo and Chris Froome sauntered away from the crowd and put more than 20 seconds into everyone else. Three years ago, when J-Rod ditched Nibali, the gaps were

Happening? Probably not, but the course designers have left us wondering and left the challengers out to suffer. I don't see formal stats, but I do see a final 5km that rises almost 500 feet, a 10% average. The only knock on this stage is that it comes between two harder ones, and itself just doesn't look that tough. 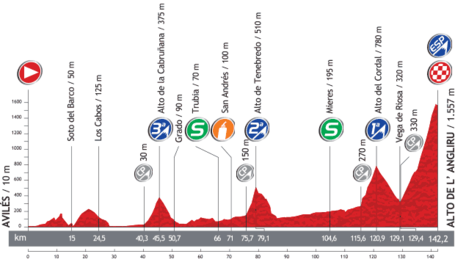 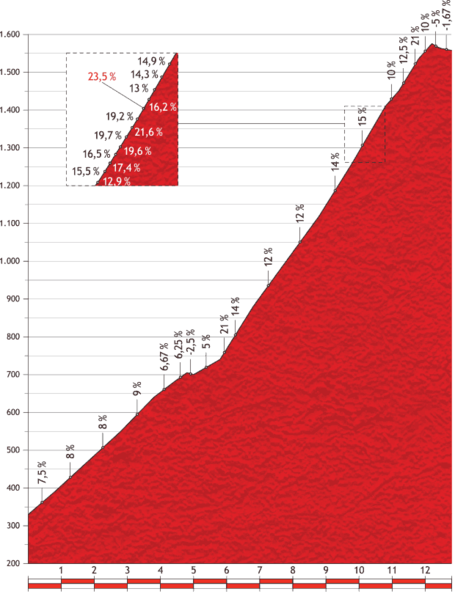 History: in 2011, the top ten came in within1.35 of the winner, Cobo. Not as selective as you thought? OK, but they were all pretty miserable. Five years ago Contador won here and cemented his status, blowing apart the field. In 2002 David Millar was shouting "Assassins!" at poor Victor Cordero. But as bad as it is, I do believe people are used to it now. Obviously the final climb of the Vuelta will be all-out war, as it has been a few times of late. The question is, if this isn't a good final climb for you, will you have played your cards already, and where?

Don't overthink it. Let it come to you, like Jens does. Do you really believe a 6km MTF can be a bigger deal than the Angliru? The riders don't.