I can't believe we're already at the last UCI stage race of 2013... and where better to hold it than in beautiful Toscana, where very soon the 2013 Road World Championships will take place? It's always fun to follow, with the best descriptive ticker around. And over in Ireland, there's the Rás na mBan. This one may not have UCI ranking, but it's a lovely race nonetheless, and more than worthwhile to check out.

Share All sharing options for: The last European women's stage races of 2013 - the Giro della Toscana and the Rás na mBan

The Giro della Toscana, now in it's 18th year, is run by the Società Michela Fanini, in honour of the young Italian cyclist who died in a car accident in 1994.  Michela, the 1992 Italian national road race champion and the 1994 Giro Donne winner, was only 21 when she died - her father Brunello now runs the Michela Fanini Rox cycling team, and this race, in her name.

This year, the race runs 11th - 15th September, and it's the only race on the UCI calendar with their new, highest category .HC ranking.  No, we're not sure why this is .HC, while the Giro Rosa and Thüringen Rundfahrt had their .HC taken away from them over the course of the season, but I'm sure it makes sense to the UCI.  Maybe.

It's five stages, suited to sprinters who can get over hills and escape artists, but not people who want a Worlds preview, because while the Stage 4 route runs for a couple of kilometres on the same roads as the Road World Championships Team Time Trial and Road Race does, and ends in Florence, it's frustratingly different, although I'm sure the peloton won't mind, as they'll have a week in the area between the end of the race and the Worlds Road Race to really familiarise themselves with the territory... 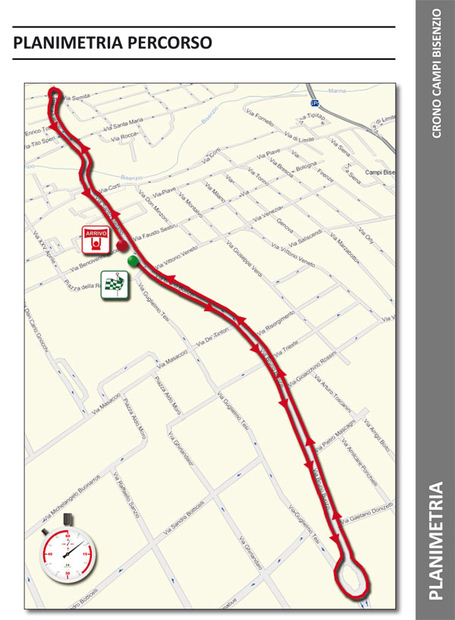 So, what can they expect?

It's the usual short ITT - out and back along the same roads, with a bit of a lump at one end, but with long straight roads that are great for building up speed.  Last year it was won by Annemiek van Vleuten ahead of Megan Guarnier and Alexandra Burchenkova, and in 2011 it was Judith Arndt, Megan Guarnier and Charlotte Becker, so Guarnier has to be a good bet to take the first stage! (ETA: she would have been, but she isn't racing...) 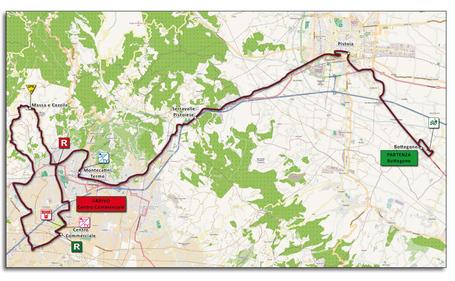 This one starts with a warm-up of about 30km, before looping through Massa e Cozzille for three and a half laps, going over the 5% climb four times - butwith the climb in the middle of the lap, and a descent followed by about 12km of flat, it's likely to be one for the sprinters - and with the form Giorgia Bronzini's on, after her three stage wins in l'Ardèche, she's my bet for the victory. 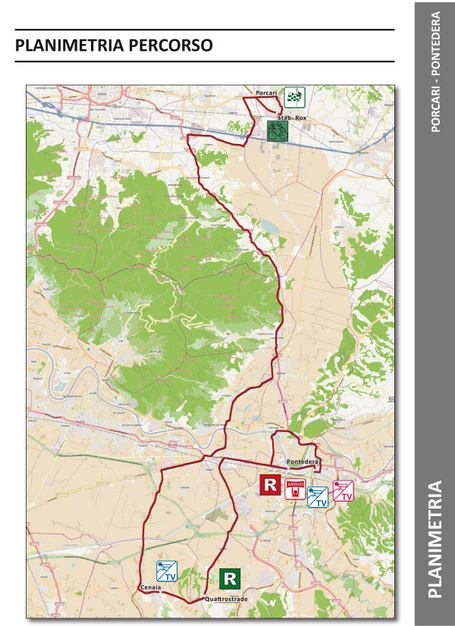 This is another one for the sprinters....  if they can get over the big climb in the 60-ish km run-in.  I joke, I joke, it looks very dramatic on the stage profile, but it's only 40m high!  They start in Porcari, race around Pontedera, then into the town for five laps of a 10km-ish circuit.  If it's windy, the teams should have some echelon fun - but it looks like it might be in an urban, industrial area, so it could be more about avoiding crashes on corners, and revving up for a bunch-sprint finish.  The last chance to see Bronzini v Kirsten Wild this year?  That makes me sad... 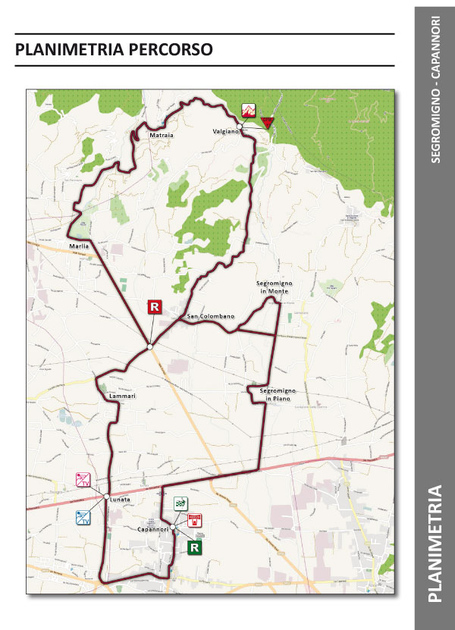 Stage 3 is a figure-of-eight course in circuits - four times round the first loop, around 16km with a little climb at a sharp average 5.5% gradient, then two loops with the major climb of the race - 330m high at average 8% - so there have to be some painful moments there, and if the descent is as steep as it looks on the profile, that'll give riders like Marianne Vos a perfect opportunity to escape.  There are 6km from the end of the descent to the finish-line, however, so chasing groups could catch escape artists...

This is the stage that should make the difference for the General Classfication - not quite a Queen Stage, but it's a hard course that the peloton will want to make even harder, with their usual attacks and breaks and fun and games.

The final stage is one they raced last year, when Bronzini beat Annemiek van Vleuten, Lisa Brennauer and Megan Guarnier - but only after a stage full of chaos, with Bronzini taking the organisers to task as the head of a rider protest, after multiple misdirections and re-starts, so don't read too much into those results - it could very well be different this year (I'm hoping nothing bad will happen this year, but with the route points saying the stage is 98km long, and the profile saying it's 108km, I'm not that confident...) 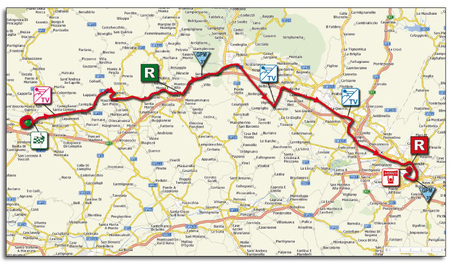 The route flirts with the course the Worlds Road Race will take, following the same route for a few kilometres between Montecatini Terme and Pistoia, but then, instead of following the RR/Team Time Trial road into Florence, it runs parallel, leading into Florence for what will no doubt be a beautiful finish.  The two lumps, at 30 and 67km will offer a chance for attacks and escapes, but if the race has stayed together up until then, at around 8km to go, there's a short, sharp Michelangelo climb through the streets that are likely to be cobbled, then a sharp descent, and around three kilometres of flat before they reach the finish-line in the beautiful Piazza della Republicca.

We can follow the race as it happens on the ticker - it's in Italian, but google translate makes it particularly fun.  You can see what I mean if you click the link (or into English)  as last year's race report is still up there, and will be until the first stage starts.  And there's live timing on the FICR website, which always has loads of interesting stats.   The startlist isn't ready yet, though of course Cycling Fever's is a bit more up-to-date, but with the Worlds around the corner, in tems of time and location, all the big hitters will be here.

You can find out more about the race with the excellent Marv Barras on the ORICA-AIS website.  You have to love a DS who looks forward to a race for

I like going to Toscana to get a look at what the opposition will have to offer. But really, I like going to Toscana, period. It's warm. We race from one small village to the next, across valleys covered in olive groves and vineyards. It's full of history and interesting sites. The people just love cycling and the crowds are always good and intense.

The food is sensational. A typical fare will wet your appetite with an antipasto of cured meat and cheeses, followed by an entree of delicious pasta. Next is the main course, usually grilled meat or fish with a side of veggies. You finish with the dolce: a small serve of gelato or a baked treat.

Here's hoping he gets everything he wants out of the race - and some team results too!

There's bound to be some great information about the race on Italian fan-site Cicloweb - and there are more previews on Velofocus,  on Les Déesses de la Route and Velorooms, and in Spanish on El Pelotón and on Cobbles & Hills - and if you can hear strange cries of pain over the internet, it's from the other previewers as they wrestle with the race website...  at least it's not muscial any more....

EDIT! And yes, eagle-eyed fans have noticed, there are a lot of jerseys in this race - check them out at the start of the  road book.  We're not sure what the jersey for 'Generosity' means, but we're pretty sure the one for 'Elegance' is a politer way of saying 'Most Attractive'... :-/

EDIT again! Or maybe not!

@_pigeons_ @illobotomy @Lolly1236R The “elegance” jersey is for the last qualified on the GC, @belencycling just told me :).

Also starting tomorrow is the Rás, Ireland's biggest women's race.  Now, this one may not have UCI status (although I'd love it if it did) but it's a gorgeous race that's well worth following, if only because the race organisers make it so damn easy to love.  Look at this website!  Follow this twitter!  Like their facebook!  It's a complete pleasure, and we usually get some great video coming out of it...  if you like Irish countryside, rain and social media this is the perfect race for you!  Look at the video from last year's Stage 5, for what to expect:

Running 11th-15th September, it's six stages long, all based around Ennis in County Clare - four stages with categorised climbs, a circuit race and a Team Time Trial.  Two of the stages run along the Atlantic coast, so the scenery will be spectacular.  The stages are all mapped onto ridewithgps, so you can look at them on googlemaps for additional happiness.  It's the eighth year this has run, and the team behind it do a wonderful job - and with teams from Ireland, the UK, the USA, Luxembourg, France, Germany, the Netherlands, Denmark and Norway, there'll be excellent racing too - just look at the startlist.

We'll be following both these races as they happen in the comments - and if you see anything about them, or any interesting women's cycling news, add it there too.  And my twitter list is updated with accounts that might be tweeting from both races.   Can you believe the season's coming to an end already?  It's been a superb year, and this last week of stage racing should finish it on a bang!

Traffic and Turmoil in the Giro della Toscana