Out goes Le Manie, in comes the Pompeiana

The organizers of the spring momument Milano-Sanremo announced significant changes to the route today. Removed from the race after a short and stormy run is the Le Manie climb, which was inserted in 2008 as a challenge to the sprinters and which gained infamy in two bad-weather editions. Inserted into the race is the 5km ascent of La Pompeiana, a technical ascent and descent to be tightly sandwiched between the decisive features of La Cipressa and il Poggio.

First, la salita delle Mànie. When it was instituted in 2008, the thinking was that it might offer a bit more of a challenge to the pure sprinters, who had more or less controlled the previous three editions. Coming in the second chapter of the race, i.e. after the Passo Turchino, it was thought that Le Mànie would be raced (not soft-pedaled), and lowland bunch sprinters might find themselves losing contact over the 4.7-km, 6.7% average gradient slopes. Mark Cavendish's epitaph was being written on its slopes when the Manxman defied his critics in 2009, hung on for dear life on the climb, and finished off the race spectacularly in Sanremo.

Ultimately, the descent was what did in Le Mànie. The In 2011 it was the home to a series of crashes on the rain-slickened, twisty descent, costing all of Garmin and several other riders a chance to see the race through to its conclusion. With that in mind, the climb and descent were pulled from the race this spring when snow sent the peloton into buses, which dropped them off on the coastal route -- The Aurelia -- shortly after the Le Mànied descent. Too many headaches. It's out.

In order to push the race out to its customary almost-300km distance, and to re-up the challenge to the sprinters, the organization is adding La Pompeiana as a third climb-and-descent, one that is very likely to shake up the race. Check out the positioning: 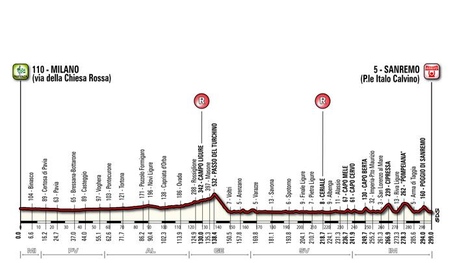 Basically, the Cipressa starts at km 261, tops out at km 267 and drops to km270. Then there's 3.5km of the Aurelia, until the Pompeiana starts, topping out at km278. The Org says it averages 5% and has a max ramp of 14% early on. At 262 meters it's the highest point of the race after the Turchino.  Anyway, the key is likely the descent, a technical matter in the grand Ligurian fashion taking the riders back to the Aurelia at km 285. The Poggio starts 5km later. No rest for the weary. Here's a topo map of the Pompeiana area:

Click to embiggen. The Aurelia, the trunk road, is SS1 along the water. My guess is that the climb takes Strada Provinciale 50 upward, because the Org says it tops out in Castellaro and descends back to the Aurelia in Arma di Taggi. Obviously there are several possibilities, but Strada Provinciale 51 connects those two villages, and looks reasonably twisty on the map. Details will come out later.

This should make for one hell of a final hour, as well as perhaps a bit more action leading up to the Cipressa. Previously, there was a long pause between the Cipressa and the Poggio, so if you didn't play any cards on the former, chances are the race would reassemble before the latter. Now, I'm not so sure. Nor am I sure that we will be calling this "the sprinters' classic" much longer, assuming we still do.