Note: this mostly covers the Montréal race. Startlists are the same for both races, but I've only walked the Québec route a few times. It's more technical than Montréal with more turns and narrower roads. Climbs are shorter in Québec City, but steeper.

It was kind of cold, pretty windy and I haven't done much climbing this year... but I put all that aside, and decided to do a recon of the Montréal course a week before the race on Sunday and get some pictures for you. That route (with some minor variations) was used for World Championships, the old Grand Prix des Amériques and the women WC. 1976 Olympics? Not sure, I'd have to check it out. 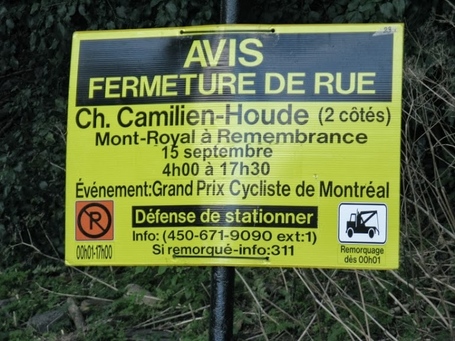 Winter The race is coming!

It hasn't changed sinced the second edition (then again, the only difference between the first and second was adding a lap). It's still a tough 17 laps of a 12.1km route set in Montréal, right next to downtown. In runs through Parc du Mont-Royal (designed by Frederick Law Olmsted, who also designed some place named Central Park in NYC).

Main feature is obviously the Camilien-Houde climb (named after a former Montréal mayor). 1.8km long at 8% with some nastier gradients closer to the end. Second climb of the lap is Côte de la Polytechnique (named after the engineering school) a shorter 780m with 6% grade. And finally the finishing line is at the end of a 560m long (4%) stretch on Avenue du Parc.

So, what about the route?

Montréal is sadly known for awful roads due to the harsh winter weather and poor maintenance. Potholes, cracks, bumps... and the worst part is, it's true. But we're lucky: the UCI insists on good roads (see? the UCI can do good things!) so the roads used by the race are in good condition.

It starts on Avenue du Parc, where you can see people fighting with fake swords and playing drums. Two left turns will get you on the Camilien-Houde climb. 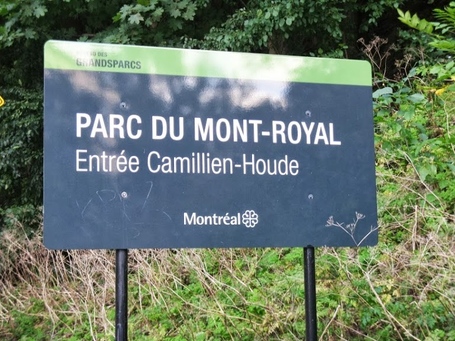 It starts with a steeper part in a right turn. 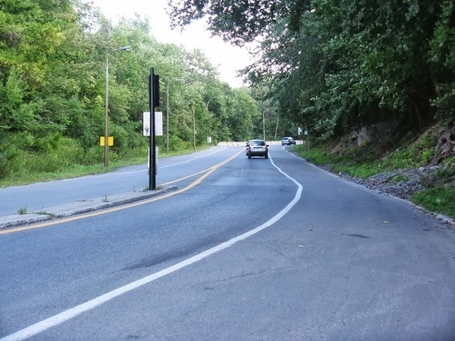 Steeper than it looks

After that comes a straight line where the grade eases down a little. 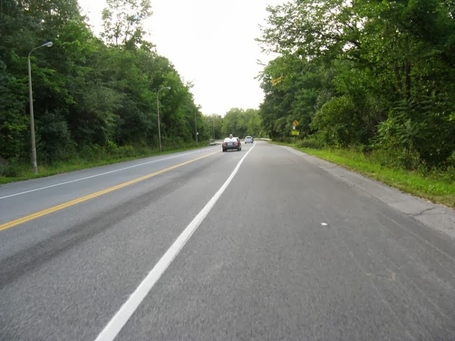 This is the easy part

But soon, it starts climbing back again and then comes a left-hand turn with concrete barriers in the middle (this is usually where I watch the race). 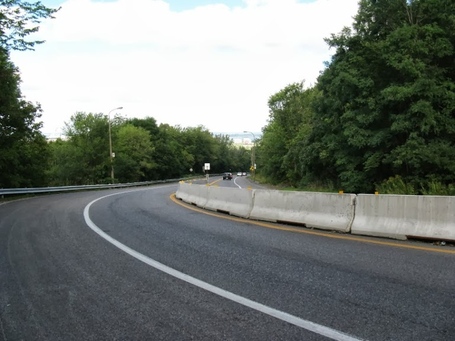 Do you see what I've climbed Larry? Do you see? 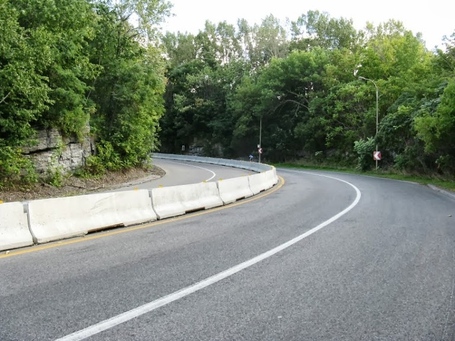 The road keeps going up in a pretty steep way passing along the Belvédère, where you have nice views of eastern Montréal. 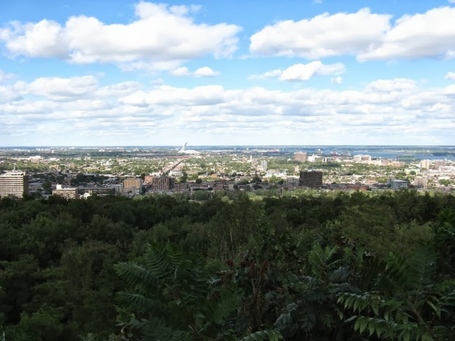 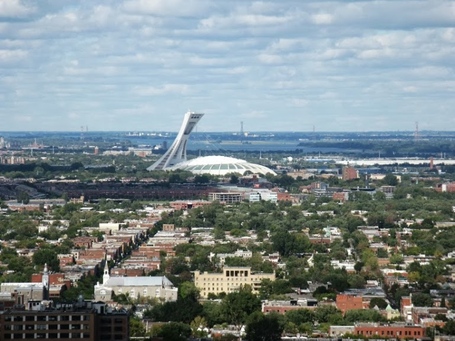 Spaceship or Olympic Stadium. Your choice.

It then passes between two small cliffs and finally it eases up for the last hundred meters or so. 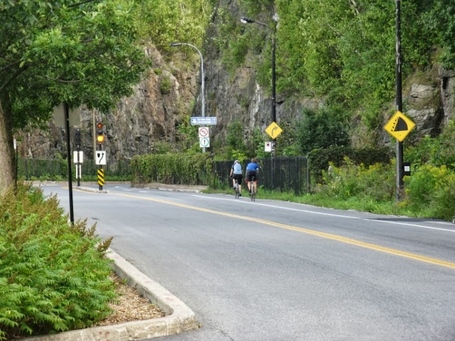 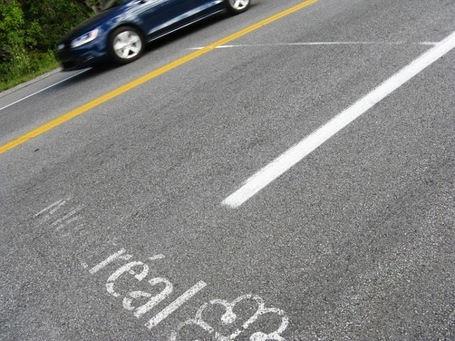 This is the summit (and where too many Strava segments end, I mean how many segments can you fit in a kilometer and a half of road?)

After that, its a fast downhill on Chemin Remembrance. It's wide, not technical and fast. 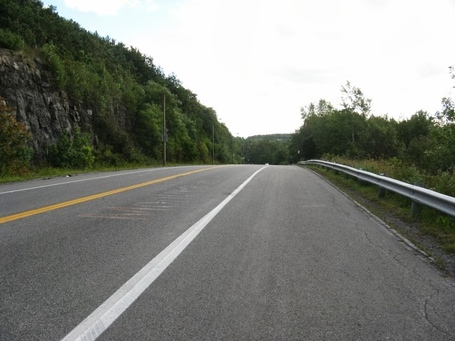 There is some road furniture, but I figure it'll be removed. After a right turn you arrive on Côte des Neiges, where it's slightly downhill. A few 90 degrees corners later, the race arrives at the Côte de la Polytechnique climb. The road is much narrower than Camilien-Houde. 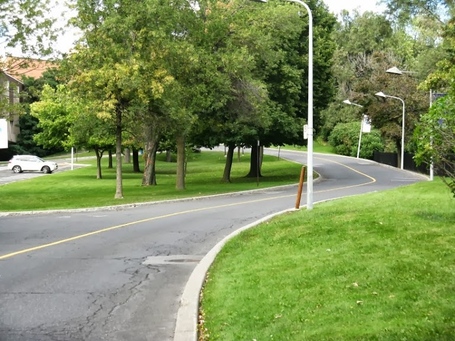 It starts easy, but in the middle is a very steep little wall. It eases up (almost flat) and goes up again for the last few meters. All in all it's not that hard, but in the final laps, it could be a place to launch an attack. 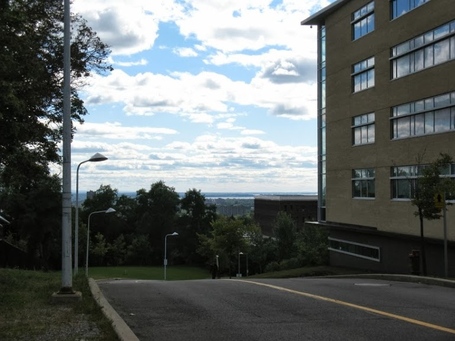 When you reach the top, turn left and there is a twisty downhill through the University of Montréal campus. And this where I fear something bad could happen. The road is a little bumpy and not that good, the worst on the route this year. Lots of painted street markings. If it rains, things could get unpleasant here.

At the end of the downhill comes a sharp right turn on Édouard-Montpetit street. Straight as an arrow, wide, barely climbing at the end. This is the feedzone area. 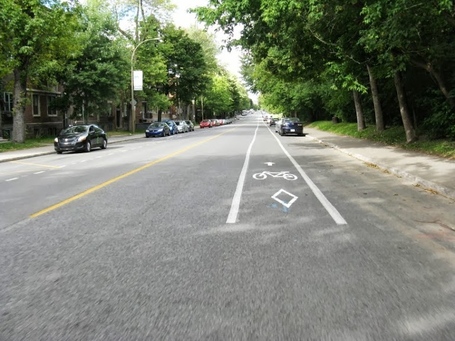 I managed to take this picture while riding and I didn't crash. Sagan-like skills!.

Sharp left turn on Vincent d'Indy, a narrow street with traffic islands and road furniture, then a fast right onto Côte Sainte-Catherine 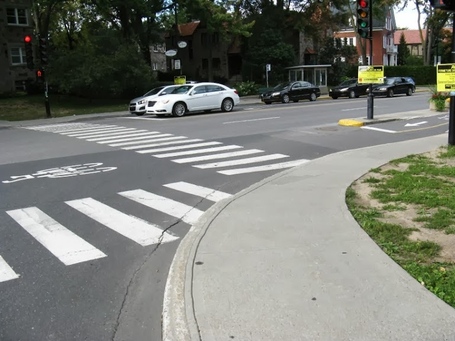 Fast turn! Will some riders take the bike path?

From there it's mostly a slight downhill (with the exception of a little false flat climbing) through Outremont (cue Homer Simpson voice): the rich part of town all the way to Avenue du Parc and to the last turn, a hairpin that will send the riders climbing back to the start-finish line.

One lap isn't hard for these guys. 17? More so. I prefer the Québec City race course as it is more unpredictable and usually provides better entertainment, but the Montréal race course is tougher. It's an attrition race where you need to wait for your time.

The strongest we've seen yet. Four former Tour winners (Froome, Contador, Evans and... Schleck!). Out of those four, Evans seems to be going well right now and is with a very strong BMC team (including Evans, Bookwalter, Van Avermaet, Van Garderen...). Not too sure about Froome, is he in top condition? If he is, he'll like it here. Same thing for Contador. As for Andy... I don't think he'll be a factor Sunday. So he'll win, obviously.

Belkin has two former winners in Nordhaug and Gesink, supported by Kruijswijk and Slagter.

Obviously, Sagan is a major threat. Never won in Montréal, but can you ever count him out?

Garmin has a very good team too: Hesjedal, Danielson, Talansky, Vandevelde... lots of support for Hesjedal.

Movistar has a good leader and a potential winner in Costa, and a good support cast, but I'm not sure if they can control the race.

Quickstep is bringing the cobbles team with Chavanel, Terpstra, Trentin, Vandenbergh... and with Kwiatkowski, Pineau, Devenyns and Velits, this could be the strongest team in the race.

Other names that could do well? Aru, Bardet, Fédrigo, Albasini, Bakelants, Leukemans, and I'll add Lagutin just because I hope Holmovka and Pablo will come to say hello.

Boivin (Cannondale): A last minute addition, it's his first race since his crash at the Vuelta

Rollin (FDJ): More suited to Québec City, the tougher climbs in Montréal won't be good for him

Duchesne (National Team): Another young rider, I'm curious to see what he'll do.

Parisien (Argos): Could suprise with a good result. He'll have the support of his team... Maybe not a podium, but if everything goes well, a high finish is possible.

Veilleux (Europcar): Was very strong last year and made this race a major objective, but Europcar didn't bring a great team. And since it's his last race (he surprised everyone yesterday by announcing he's retiring at the "old" age of 25 to finish his engineering degree), he'll give it all.

The race in Québec City looks like it will be under light rain. For Montréal on Sunday, they can't make up their mind. I've seen forecasts for rain, sun... Right now they are predicting variable cloudiness (love that vague prediction), 18 celsius (that's mid 60s for Farenheit lovers). Moderate winds from the southwest who shouldn't cause too much problems.