The only World Tour races in North America take place this Friday and Sunday in Québec and Montréal, bringing a distinctly Ardennes flavored peloton to hilly circuits just two weeks before the World Championships.

If one watched the GP Cycliste de Québec and GP Cycliste de Montréal in isolation from history, it would be easy to be mistaken about their youth. Québec and Montréal are cities in the old European mold, founded in the first half of the seventeenth century and shaped by centuries of first French, then British colonial rule. Walk down the streets of either city and the spoken and written French that dominate them will make you feel as if you are on the continent rather than a mere train ride from New York. The races that transpire within these cities have the same continental feel, replicating the feel of a World Championships circuit with their technical nature and abundance of short, sharp hills used to shape the racing. That is no surprise, really, as the Montréal course was the venue for the World Championships in 1974! Add in a predominance of World Tour teams and the vibe is unmistakably old world.

But, these races are the new kids on the block, holding World Tour status even shorter than the Tour Down Under in Australia has. The races were untested when they were first held in 2010, going straight from designs in the minds of UCI officials and local officials to World Tour status with no stops between. But, unlike the questionable "success" of the Tour of Beijing, these races became instant classics, attracting the attention of top riders desiring good rides in Québec and Montréal for the merit of the races alone rather than as mere confirmations of their training for the World Championships that follow two weeks later.

Competition with the Vuelta a España cuts short the list of top-grade talent flying to Canada, but a look at the start list for the weekend shows these races are not struggling at all from the overlap. Peter Sagan, Chris Froome, Thomas Voeckler, Greg Van Avermaet, Cadel Evans, Rui Costa, Robert Gesink, Ryder Hesjedal, Lars Peter Nordhaug, Tom-Jelte Slagter... the talent pool is almost as deep as any eighty year old Ardennes classic.

The races are on the surface very similar, both taking place on circuits between 12-13 kilometers long with a number of shorter climbs to navigate each lap and a finish on a gradually rising stretch of road. However, on closer inspection the races have distinct characters. Sunday's race in Montréal, which MathieuG has excellently previewed, has slightly longer climbs than its sister race and less twisty, technical sections.

Québec is the punchier of the two races, having four climbs per lap. Each lap is back-loaded, the Côte de la Montagne (375m at 10%) coming first at 9km into the 12.6km lap. After that, the succession of climbs is relentless as the course gradually climbs from its lowest point to the finish. In order, the next climbs are the Côte de la Potasse (420m at 9%), the Montée de la Fabrique (190m at 7%), and the finishing climb of the Montée du Fort (1000m at 4%). 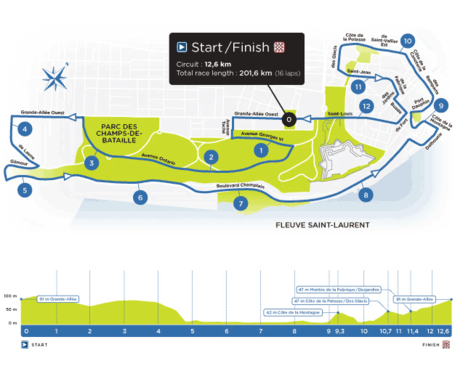 The quick one-two-three-four punch of short, steep climbs whittles down the peloton as the race goes on but racing does not fully kick off until the last several laps. By the last lap, the lead group is down to perhaps forty or fifty riders, setting the stage for aggressive racing on the final climbs. There will be a reduced bunch sprint of 20-40 riders, but the real question is whether it will be for the top step of the podium. In 2010, Thomas Voeckler won solo a mere second ahead of a sprint won by Edvald Boasson Hagen, having nipped away in the final kilometer while others were watching each other after a spate of attacks and counters. Last year Simon Gerrans bridged up to a late attack by Greg Van Avermaet before beating him in the sprint, this time four seconds ahead of a larger sprint between the remainder of the favorites.

The race has the potential to blow apart more, as it did in 2011 behind winner Philippe Gilbert and co-attacker Robert Gesink. That year, 47 seconds separated the top ten and there were multiple seconds between almost every rider in the top fifteen. Of course, it all depends on just how hard the favorites race the final three laps and, as a result, how many teammates Peter Sagan has to help bring things back together.

It is almost impossible to look past Peter Sagan to win both events this weekend as he can punch his way up these short bergs as well as any of his competitors and sprint better than the other contenders. But occasionally Greg Van Avermaet has pushed him close over the past several weeks and the Belgian rider on BMC almost won the GP Ouest France Plouay in a late-race attack just recently. But should the race be more open with early and plentiful attacking, the field becomes much wider open. At the least, it will be fun watching everyone try to isolate Sagan.