Like your sound on the go? Here are three ways to make it happen.

Music on the go. For people with bikes. This is where it all started: 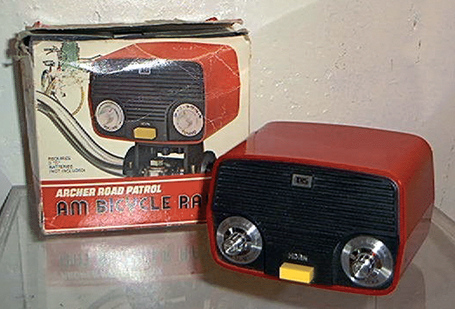 I know this all too well. The model attached to my little upright Raleigh was a bit different than this, but since cameras were barely invented in 1975, people taking pictures of their bike-handlebar-mounted AM radios was about as likely as the subsequent invention of the internet and posting of said pictures thereto. Never mind that though, this is similar enough. And anyway, the point is, I was pretty cool. I could bike to my friend's house and listen to the Sox game or WRKO on the way. As long as it didn't rain and only for about a half hour before batteries became an issue.

Sound on the go remains a pretty big deal for cyclists, runners, walkers, rollers, and anyone else getting their groove on while shedding some calories or hustling to a meeting. Music is a great motivator, if that's what you need. At other times it's connectivity, thru live radio, e.g. catching the news. Podcasts, sporting events, DJ sets -- all alternatives to your mp3 library, depending on the circumstances. With the power of smartphones, the question is no longer "what."

Enter... about a zillion choices, including the obvious where you just run some headphones out of your device. But for a lot of people, headphones are not particularly substantial. comfortable or even safe. More substantial options abound, and for Bluetooth-enabled devices, those that can take the wires out of the way and deliver good quality, let me run three versions past you. 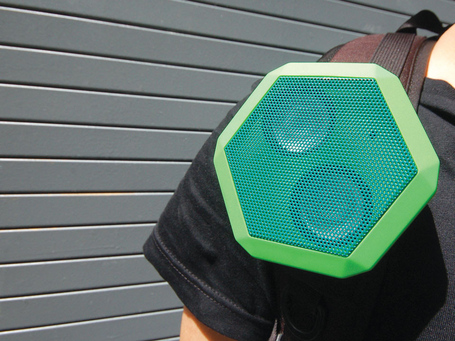 A small, lightweight BT-enabled speaker that can clip on you or your bag just as easily as it rests on your counter. Not that it's rocket science, but a good clip goes a long way: 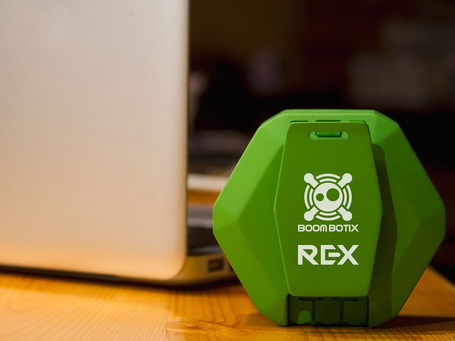 I've had this thing clipped to various packs and it hasn't fallen off yet. The biggest risk to it so far is its ability to draw my kids' attention. They have actually stuck it on lemonade stands, hockey goals, and lord knows what else, and so far it's been tough as nails.

Once clipped, the Boombot Rex (MSRP: $119.99) does its thing, blasting out quality sound without blotting out what's around you. The concept was started by artists bopping around San Francisco, listening to their soundtrack, but needing to hear the traffic around them. Hence, it's visually fun, reasonably rugged, and perfectly portable.

So what would you use it for? Here are some ideas, generally connecting around the concept of having fun in the city.

Not bad. Not orchestra-quality. This is the simple, on the go piece, not the perfect pitch.

Great device, easily the most useful, and the sound is good enough, if not spectacular. Bluetooth connection couldn't be easier. Also, you can ping Siri, connect to additional speakers, and recharge with a USB attachment. Unless you're really, really hung up on sound quality, this is an impressive little package of awesome. Also, it's kid-tested and approved.

"But I want my sound to be perfect!" 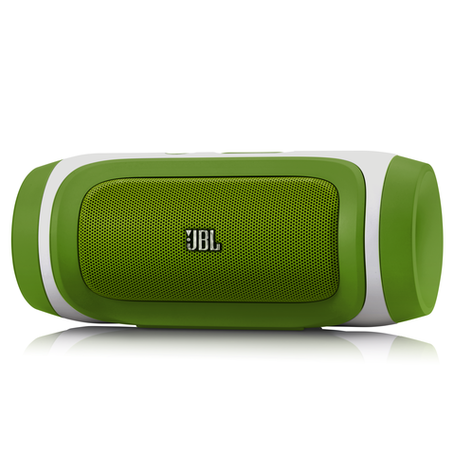 Enter the JBL Charge (MSRP: $149.95), a portable Bluetooth speaker of the highest quality. It comes in green and plays music, and there's where the similarities with the Boombot Rex end.

A small, portable speaker roughly the size of a can of soda, small enough to fit in a pocket, but packing a big, big punch. JBL have been making hi-fi speakers since my Dad's early days. They know what they're doing.

Being a company with so much history behind it, JBL are careful to protect their image and their fundamental mission: delivering excellent sound. So the Charge isn't quite as versatile as the BoombotRex. It's not meant to hang off your messenger bag as you wind through traffic.

But it is meant to play your sounds wherever you and your laptop, tablet or smartphone want to go, and play it flawlessly. As to the portability, it has a rugged exterior (which I haven't tested too much yet, but still), and fully charged it'll go for up to 12 hours.

This was the speaker we took on our beach vacation, when I needed something to play in the kitchen and to stash out of the way otherwise. My kids had already made off with the Boombot, but no matter, the Charge's sound had me hooked.

If your needs are simple and focus around good quality sound, this is the choice. And yes, my kids tried to steal this one from me too, but I shooed them away. I guess I would describe this as a more serious device, for good or ill.

When you just want to be alone with your favorite band... 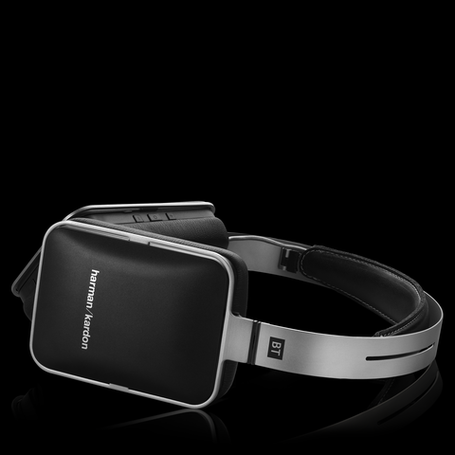 As portable audio goes, full headphones are a 90-degree turn from stuff like the BoombotRex or the Charge. Those are devices for integrating your love of music or other sounds with your life, maybe even with your friends. Headphones are for turning inward, eliminating the outside world and focusing your full attention on the sound.

Harman Kardon have a line of the most sleek, portable, comfortable headphones in exsitence. And if the Harman Kardon BT, its Bluetooth model, is any indication, this is industry standard stuff.

[Odd side note: Sidney Harman was a former Secretary of Commerce!]

Headphones. Soft, leather pads close over your ears, anchored by a leather top strap separating the structural support from your noggin. And that's it.

No wires. Nothing to hold or clasp or fiddle with. Your phone is in your pocket ,or your laptop is wherever, and the sound is in your head.

Because your kids are asleep and you don't feel like controlling the volume. Or because you're on a plane or a train and there's nobody you could or should be talking to. Because it's a time when you can disappear into your own head space, with no regard to what's going on around you.

Gorgeous. Let's put it this way: if you want to hear the lead singer inhale before the lyrics come out, if you want to feel the big beat literally pick you up off your couch, or if you want the sound of a lonely, tinny sax to send chills down your spine... you're on to something with the Harman Kardon BTs.

The least versatile way to go, insofar as making your way through the world. Put them on and you won't hear anything else, really, save for the most anguished kid noise or the honk of a car. But that limitation is also their beauty. Because when it's you and these headphones, it's you and your music. Portability is excellent as well, they fold down to something you can slip in your briefcase next to your magazine.