On an Angliru stage that delivered everything it was built up to be, Chris Horner sealed his victory in this Vuelta with a late surge after having fought off repeated attacks by Vincenzo Nibali on the steepest parts of the climb. Horner now becomes the oldest, and one of the least expected, Grand Tour winner of all time. Ahead of the two FDJ's Kenny Elissonde held on from the breakaway to grab the stagewin, proving he is one of the biggest climbing talents out there.

On a day that was suspected by many to be a Horner coronation, given the comparative strength we have seen in the last few stages, the story was all about Vincenzo Nibali taking the fight to the race leader over and over again. Katusha set a punishing pace on the easier first half of the climb, reducing the lead of the breakaway dramatically. Kenny Elissonde and Paolo Tiralongo started the climb with a 5 min 30 sec lead but saw it drop fast as Dani Moreno led the shrinking group of favorites up the climb. But as they reached the steep sections it was instead surprisingly Nibali who seized the initiative, launching an attack that the others couldn't or chose not to respond to immediately.

Horner gradually dragged the spaniards Valverde and Rodriguez back up to the Astana captain while at the same time Nibali's teammate Tiralongo let Elissonde go on alone at the front in order to drop back to help his captain.  For a brief moment Astana had three men in the group of favorites but Tiralongo and Fuglesang had little to contribute with. Nibali then hit the accelerator repeatedly, each time gapping Horner but the American slowly reeled the Italian in every time. Gone though was the smile on the RSNT-rider and he was clearly not as superior here as he had been on previous climbs. On the steepest sections there was chaos as riders, cars, motos and massive (and massively stupid/drunken) crowds were all squeezed into way too little and way too steep space. Out of this mayhem, with about 2 km to go, Horner decided to attack in a moment where Nibali was visibly struggling to hold the wheel. Nibali had no response as Chris Horner finally decided the outcome of the race in a convincing manner. 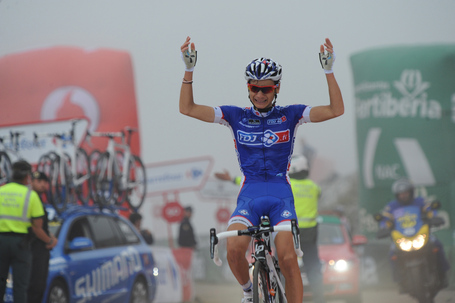 For the stage win there was nothing to do for Horner though as Elissonde had just enough of a gap left to roll in for the biggest win in the 22 yo Frenchman's young career. Fighting through the mist at the top he finished 26 seconds ahead of Horner with an effort that must have taken years out of his life. Behind the front the lower step of the podium was being decided as well as Alejandro Valverde fought back from being dropped earlier on the climb to re-join and then later drop his nearest rival Rodriguez , who never had the legs to finish off the work of his teammate early on the climb. Instead Valverde took time on him and secured third place on the podium once again.

Tomorrow the race parades into Madrid for a sprint finish with Chris Horner secure in red and Nicolas Edet secure in the climbers jersey after a strong defense in the breakaway of the day. A fortytwo year old American just won the Vuelta, who would have guessed that three weeks ago?