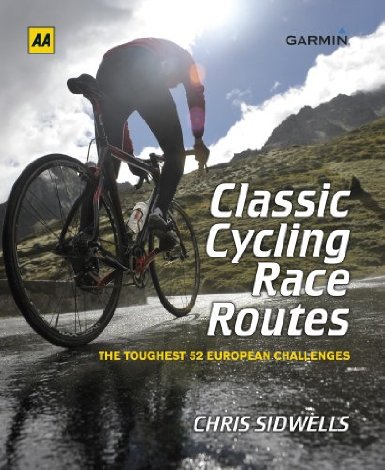 There are few types of books I enjoy more than big photo books providing ideas for challenging bike rides. So I opened the pages of Classic Cycling Race Routes with some excitement. But it certainly gets off to a disappointing start.

The book was written in conjunction with the British AA (Automobile Association) and Garmin. Perhaps this is why it seemed confused as to its target audience. The 52 routes seem appropriate for fairly advanced cyclists likely with at least some cyclosportive experience who are looking for further challenges, both in the UK and on the continent.

But the introductory chapters are "dumbed-down," poorly written discussions on choosing and maintaining a bike, developing a training plan, and nutrition. Bizarre to say the least.

I know, I know, I am sounding grumpy. So let me just give a few quotes from the intro sections and let you be the judge.

Gearing: "Just like in a car, you have to change down the gears when cycling uphill to avoid straining your engine, which in the case of cycling is you."

Tip: "You need to carry some things to support your effort on any ride, but it's best if these are attached to your bike, not you, so that you are able to ride as light as possible. Drinks go in bottles held on the frame in special cages."

Honest, I swear, I did not just make that sentence up. Some more:

Building Stamina: "But what is stamina? It's the ability to keep doing something for a long time."

Nutrition: "The reason you should try to cut body fat is that it doesn't contribute anything to your cycling performance. Quite the opposite, in fact - it detracts from it."

I'll stop quoting, but know that the first 20 pages are written this way.

There is also a section on "Using a GPS Device" that probably should have included the word advertisement at the top of the page. At first, this Garmin commercial didn't bother me too much as it included a link to gpx files for all the routes - smart idea. But I can't comment on the quality or layout of this link as I was annoyed by the required registration form.

Abruptly, after the nutrition section, the book starts listing the routes. No explanation of the choice of routes. So let me provide one:

The book is subtitled "The 52 Toughest European Challenges." Which isn't true. In fact, it is a broad survey of quite interesting routes ranging from fairly flat, to medium length and quite hilly, to jaw-droppingly difficult. Nothing wrong with that. But the title is misleading.

Geographically, 24 of the routes are in the UK & Ireland, 7 in France, 7 in Italy, 5 in Belgium, 5 in Spain, 2 in Switzerland, and one each in Germany and The Netherlands.

The vast majority are cyclosportives, quite a few are famous one-day classic routes, a couple are old GT stages, and there are some one-off of ideas like the Cinglés du Ventoux (cycle all three sides in a day) and La Pico del Veleta (highest paved road in Europe).

I'll list all the events at the bottom. I can't comment on the UK routes, but the alpine collection is good - I've ridden 6 and know the roads for a few others. It includes famous stuff like La Marmotte, Maratona dles Dolomites, and the truly epic Alpenbrevet. A stage of the Tour of Italy includes two sides of Stelvio plus Mortirolo, and there are some ok Pyrenéen routes.

But I was surprised, frankly, by how few alpine routes were included given the sub-title of the book. Instead, there lots of one day classics: Paris-Roubaix, Paris-Tours, Milan San Remo, Lombardy, the 6 routes in Belgium/Holland, etc. Nothing wrong with that I suppose. But it certainly surprised me.

Each challenge is outlined for 3 or 4 pages that include statistics (distance, ascent), an explanation of the route, perhaps some historic tidbit, a route profile, a route map, detailed directions, and quick info section under the headings: "Website" (a link), "Date" (if an event), "Why The Name?", "Anything Else?" , and "Don't Forget."

The writing here is better than the introductory section - was it written by the same person? There is plenty of useful information. The reader is given a good idea of what to expect if riding including the difficulty of the route, type of terrain, etc. It does a descent job of what most people probably expected from this type of book: It gives a bunch of ride ideas, then provides enough information for someone to actually go ride anything they find interesting. For that reason alone, it will escape my trash bin.

A quick note: if you are looking for pro bike race history for these roads, this is the wrong place. Again, nothing wrong with that. Just saying.

The photographs? You know me: I like cycling photos. The book is big, but smaller than what I'd call a coffee table book, and there are no full page spread photos. But the photos are at times quite good. But to be clear, you wouldn't buy this book for the photos.

Strangely, I much preferred the UK photos. Generally much more interesting. At Sidwells' web site he says that many of the photos are his, but he also uses photos by Luc Claessen (Belgian), and Andy Jone and Rik Robson who both work for cycling weekly.

I suspect (but I am only guessing) that he struggled to gather photos for many of the continental locations. Quite a few are pro race shots, particularly for the one-day classic routes. Some, I don't think are of the actual route being discussed (again, I may be wrong), and some are just clearly place-holders. For example, for the Gruyère Cycling Tour the main photo is labeled "Switzerland's meadows and mountains" and is a generic shot of a golf course and ski lift. Not impressive given how beautiful that route is.

Overall, this book left me cold. I struggled to overcome the near incompetent opening, but still found much to like in the collection of rides. On the other hand, one could probably do better by finding a good cyclosportive web site that lists the best events in Europe.

** Disclosure: The publisher provided me with a free copy for this review **