Techs-Mechs: Your Smartphone Is Cleared For Takeoff

Pelican Pro Gear puts your smartphone where it belongs: on your bars

Share All sharing options for: Techs-Mechs: Your Smartphone Is Cleared For Takeoff

I was on my way in to work, via a steady-state interval, when my phone rang.

No, he didn't. Well, OK, I was breathing a bit heavily, which makes even close friends uncomfortable to listen to, so we agreed to talk a few minutes later. But the revelation was that I answered the phone in the first place.

What's happened is that I have an iPhone dock on the stem of my commuter/training bike. This day has been coming for several years, really since about a week or so after I bought a Garmin Edge 700, then the greatest bit of handlebar electronics made. Smartphones had arrived, and bike data applications were only a matter of time. My iPhone had already carved out a permanent place in my training setup, providing my music and contingency planning device. Those iPhones, very powerful. At least a slice of Garmin's cycling market depended in part on not being able to combine the cycling data tracking into the phone.

And Garmin was safe until two things could happen: the creation of comparably powerful data-tracking applications, and a way to attach the phone to the bars. On the former, I'll kick it to you guys to tell me whether that's happened by now. I know about Strava. I'm getting there, slowly.

But the latter -- it sounds like it should have been easy, and yet early iPhone holders seemed rather large and untrustworthy. iPhones aren't cheap, nor are they built like a Garmin to withstand some knocks and bad weather. Perhaps some iPhone users were content to track data from their back pocket, but to me, if I couldn't see it, it didn't exist. But now the attachment problem is solved, and it's kind of awesome.

Last month Pelican ProGear sent me their CE 1020 Bike Phone Mount, a simple, lightweight and not overly clunky device that can hold pretty much any smartphone, and its case. At six ounces, it's on par with the litany of devices that look like they're about to drop your phone next time you hit a tree root. Yes, there are other devices, slimmer ones even. But the Pelican Mount is close enough, simple as can be, and most importantly, strong.

Mounting is pretty simple, though it took me about 10 minutes to figure out that it could, in fact, fit my oversize stem (or bars). Taking out one of the two rubber strips solved the matter quickly. Two weeks later, the bar connection hasn't budged. Here's how it looks on my bike. 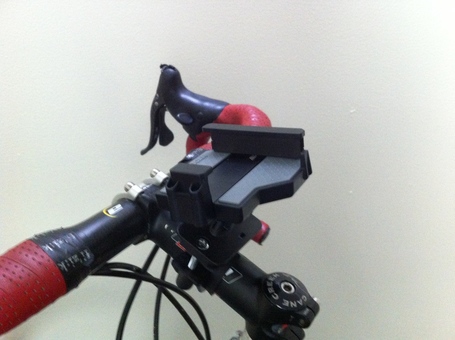 No, I can't show it with my phone when I'm taking a picture... with my phone. But that long bolt is what keeps it in place, and while nothing fancy, it's not going anywhere. And here's what it looks like on someone else's bike from a stock promo pic. 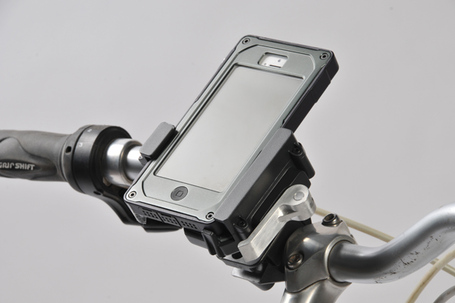 The phone holder is connected to the base by a ball joint which enables you to swivel the phone into whatever position you want. It's moved a bit when I've hit some bumps, but minimally, and I can't imagine the joint getting looser or failing. The phone holding function, though, is what impressed me most.

To insert your phone, you slide it in from the top til the bottom strikes the wee bit of frame. Then you use the quick-release skewer to clamp it in place, between the rubber-padded side panels. A quick release! The same technology that holds far more important parts of your bike in place. It's as if the folks at Pelican rode bikes or something. The design means you can insert just your phone or the phone in your regular carrying case. Since my case is currently holding the back glass panel of my phone intact, and since my case has its own bit of rubber, this works out especially well. Neither the phone nor the shards of broken glass are going anywhere.

As for the experience of riding with the phone where I can see it, I had no idea it'd be so useful. I get plenty of calls on my commute, either people talking shop in the morning or my wife wondering how close I am to getting home at night. I stopped trying to answer the phone in my pocket while riding years ago, but now I can not only get to it, I can carry on a conversation. I can swap out of a podcast that's going awry. I can turn off a Sox game radiocast when things turn ugly (or switch it on when they blossom). I can read texts, which isn't itself a goal, but it's good to be able to quickly determine whether someone really needs to reach me. My phone does a lot of things that I care about during commutes. Training rides? Music will do. And maybe Strava.

The only caveat is this: iPhones don't like rain. So the freedom to pop your phone into the Pelican CE 1020 probably comes with the responsibility to purchase one of these covers, or facsimile thereof. The fact that the Pelican will hold just about any cover makes the solution an easy one. But one we Seattle-ites had better not forget.