Germany's Tony Martin, steamrolled the most accomplished and elite men's time trial field to win his third consecutive World Championship title in Firenze, Italy today. He comfortably dealt a 46-second defeat to two of the best cronomen of the past decade, both on top form, in Bradley Wiggins of Britain and Fabian Cancellara of Switzerland, who instead staged a nail-biting duel for silver, won by Wiggins with all of 2.25 seconds to spare.

Portugal's Nelson Oliveira laid down an early marker and got to sit on the "hot seat" for a while -- at UCI time trials they keep the top three finishers on a seated podium while later riders roll in. Kanstantin Sivtsov of Belarus and Swede Gustav Erik Larsson (a former Olympic and UCI silver medalist in the time trial) also took their turns, but things only got serious in the last half-hour as Belarussian Vasil Kiryienka put in a potential medal-winning time. Even American Taylor Phinney, second last year, couldn't match Kiryienka's effort. But unfortunately for Belarus, there was a threesome of greatness still on the road, and few-to-no hazards to slow them down.

Thanks to the use of GPS, providing running updates throughout the race, it was clear from about the 10km mark that Martin was ahead. In fact, Cancellara had a narrow lead coming out of the start, but it was fractions of a second over Martin at the first check, and soon after the German took over the race. Wiggins, for his part, started slowly and maintained a deficit to Cancellara of 10-20 seconds for much of the race.

By the second check the winner was clear: Martin was 13 seconds ahead and pushing an incredible 53km/hr. The board-flat and arrow-straight course along the Arno River was well-suited to his massive engine, as he calmly turned his 58-tooth chainring up the center of the road. Cancellara maintained his own steady lead over Wiggins, even as his deficit to Martin crept higher. At the third check the quadruple champion was 28 seconds in arrears to Martin but still 12 seconds up on the Brit. The race for the rainbow was effectively over, and only got more assured.

But the race for silver became a thriller, as Wiggins timed his effort perfectly, taking it up a tick in the final 10km or so. With roughly 2km to go he drew even with Cancellara, and as they came in the Brit laid down a time that the GPS predicted, correctly, would hold off the Swiss Bear by a second or two. And he did.

Special props to Dane Rasmus Quaade, who at 23 joined the elite party, and to Marco Pinotti, who represented the old guys and his home nation with a creditable seventh. But really, most of the credit goes to Martin, whose final time represented a speed only 0.5km/hr slower than the winning team ride of his Omega Pharma-Quick Step squad on Sunday. Results:

Here's your elite podium. This was a special moment for cycling fans, watching these three at their best. Strange as it seems, such opportunities don't come along very often. Today, Martin was the best, so much so that it's hard to say what a different course would have done. But each of these guys has a claim to time trialling greatness. 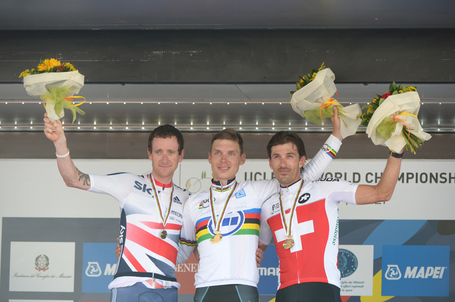