Comparing Mondiale Circuits: How Does Toscana Stack Up?

It's a climber's course. But so were some other ones.

Share All sharing options for: Comparing Mondiale Circuits: How Does Toscana Stack Up?

Because it's never too late to preview the Worlds course. A lot has been done on this subject in the abstract, e.g. people riding with helmet-cams and gnashing teeth over statistics. But now we've had a couple races on the course and it's no longer so abstract. I don't know enough about Junior women to say what that event meant, but from the U23 men we could see that the course did a good job of wearing out all but the top-class of riders.

So what does this mean for Saturday and Sunday? Can we expect a small field finish or successful solo effort? Or is there a way a bunch sprint could happen regardless? Well, I would never predict a bunch sprint in the women's race, since that will be rife with attacks, but with the men... you never know.

Let's compare this year's course to some recent "Climber's routes". Here is the Toscana course (click to embiggen):

The Fiesole climb of 4.3km definitely took up much of the race, and did a lot to tire out legs, but didn't seem like any sort of launching pad. Which is fine, since it tops out 10km from the line. The Via Salviati looks more decisive. But again, there's work to be done afterward. Wind direction and speed will have a say as to whether breaks will make it home intact.

So what course does this most resemble? Here are my picks, in rough order, though I may change my mind before I'm done.

Climbs: Two steep ones. 3,000 meters of total climbing on the course. But very little before the final circuits.

Resemblance? The long climb/short, steep climb/ flat run-in is similar. But the climbers were hindered by several factors. First, the board-flat first 80km did little to dent anyone's legs. Next, the climbs were perhaps too steep for anyone to do much, going well into the double-digits. And finally, Philippe Gilbert did stage a classic climber's attack to win, only to be slowed down by headwinds in the final 3km.

Toscana has a few punchy hills before the circuit begins in earnest, not enough to hurt anyone really, like Geelong. Winds, can't say. The biggest difference is that the climbs themselves are of the gradients that make for good attacks. Weather permitting, we should see a more aggressive affair than in 2010, which tilts things back to the little guys.

Resemblance? The climbing stats look pretty similar, but Varese had the order backward: the shorter, steeper one came first. This meant that riders were holding on to their cards, what with almost 16km to go after the last steep ascent, leaving Ballan the task of getting over the relatively tame Salita dei Ronchi. I don't recall what came before the circuits, but whatever it was, it didn't slow down Big Alessandro. Or Matti Breschel, hot on Damiano Cunego's heels. 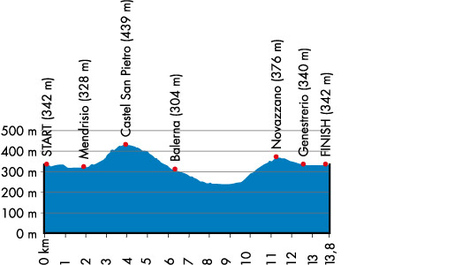 Climbs: The real story of Mendrisio was how the course never stopped climbing for long, some 4700 meters in total. Everyone tipped it as a climbers' affair. Here's a closer look at the climbs:

Outcome: We yelled for Cadel. Or at him, but mostly for him. A few larger riders like Cancellara and Breschel hung around.

Resemblance? That 2009 circuit was harder, for certain. That was a true climber's course, no escaping the conclusion. Much more so than this year's. Those gradients were stiffer, particularly on the first climb. Legs were worn out. 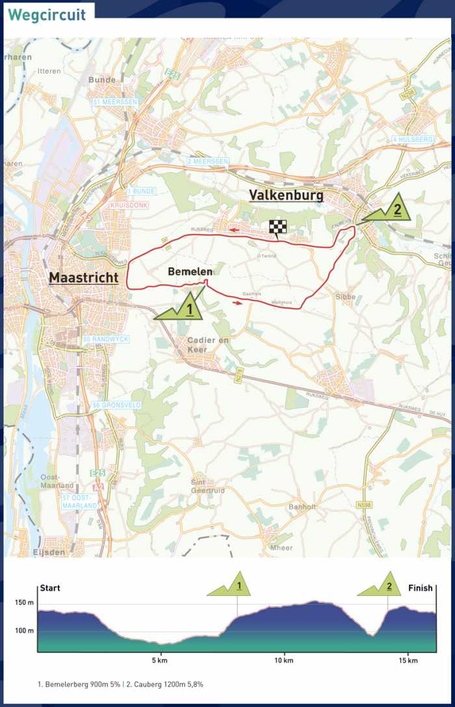 Climbs: Amstel Gold style racing all day long. That second climb is a little thing known as the Cauberg.

Resemblance? Pretty minimal. For one, the presence of the Cauberg so close to the line meant that an attacking climber could finish the race off if he timed it right. Also, the Cauberg itself is far more challenging than the Via Salviati. Add in a long day in the saddle before the circuits began, and I'd say last year's course was really not like this year's.

I'm calling this a very balanced course, and sticking with Varese and Geelong as my closest comps. A sprint finish is not out of the question, though if it happens, it'll be from a reduced and rather tired field. Really, though, if anything this comparison makes it possible to understand why Fabian Cancellara was so adamant about focusing on the road race. A smart guy with plenty of tricks up his sleeve and oodles of power might be just the right person to outfit in Rainbow Sunday.