Marianne Vos of the Netherlands launched a textbook attack on the final Salviati climb to go clear of an elite field and win her second consecutive road racing World Championship in Tuscany today. Once so elusive, the Rainbow Jersey slipped comfortably onto Vos's shoulders after she countered Sweden's Emma Johansson, got a five second gap, and was never seen again. Italian Rosella Ratto took third behind Johansson to complete the medals.

The race fell predictably into the hands of the home Italian squad, who raced authoritatively in the laps leading up to the conclusion, sending riders up the road in every movement. First it was Valentina Scandolara, making an early move. Later Francesca Cauz christened the business end of the race, where the peloton began to take shape and reduce in size. Finally, on the last two laps Ratto was accompanied by Tatiana Guderzo and Elisa Longo Borghini, though the latter two were struggling to hang on into the final lap.

Vos allowed teammate Anna van der Breggen to do some of the day's most impressive riding, nailing back moves and setting tempo to the liking of the defending champion. Johansson lingered quiety among the top group, and the USA's Evelyn Stevens tried a move or two which helped winnow the field. However, the elite septet became eleven as they stalled on the climb of the Fiesole, allowing Italy to regroup. Quickly the same cream rose to the surface as the group descended and began the final trip up the Salviati, the ideal launch pad for whomever was strongest in this group of strong, punchy climbers.

The answer, as it so often is, was Vos. Stevens first and Johansson next went to the front to pick up the pace, but Vos was ready to pounce on the first sign of an attack, and the move by Johansson -- the year's top rider and arguably Vos's greatest threat -- was enough to trigger the winning attack. Vos had five seconds by the top of the short climb, with Johansson and Ratto chasing together. The gap yo-yoed between five and eight seconds before the final 500 meters, when the Swede and the Italian turned their attention to each other and the silver medal instead. Vos soloed home galiantly, in a scene we've seen so often, while Johansson overtook the exhausted Ratto for second.

For Vos, this is her third World Championship on the road. In the past two years she's won four outdoor titles (she's been the cyclocross world champion since 2009). Her mark of road medals now stands at eight -- five consecutive silvers sandwiched by a treble of golds. The cycling world is collectively out of new ways to describe her greatness. So we will just revel in it instead. 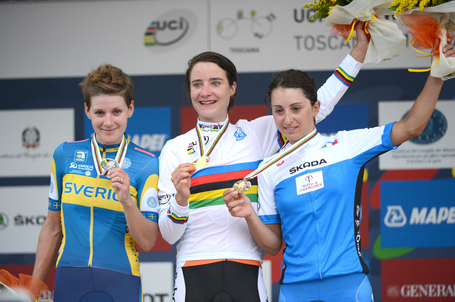