If this is Spain, it must be... a bunch of Italians crushing the time trial? What the hell just happened?

OK, a few things. First of all, one of the Italians is a champion in the making. Vincenzo Nibali has a Giro in his pocket and is on course to win this Vuelta, his second, hands-down. Yes, it's too early to say anything definitive (other than that Chris Horner is still old), but so far Vinny is better than pretty much everyone at team time trials, uphill ITTs and climbing the steep slopes. I guess that leaves less steep slopes, sprints and descents as the only places where the Shark hasn't attacked. Good luck beating him there, Valverde.

As to Domenico Pozzovivo's good turn, he has a decent history in climbing ITTs even before he joined a team that took them seriously, and for whatever reason was just on a good day. Or others were on a bad day, but this is the same guy who couldn't keep up with Nibali in the Giro ITT, now beating him by a second. Toss in Dario Cataldo's fifth place (or third, if you simply remove the top two from the list of crono mortals), and I dunno. Perhaps the nation-wide Italian anti-crono disease only applies at home. You know, daydreaming on your ITT bike isn't as likely to slow you down in Spain as it is in Tuscany. If you're Italian, anyway.

Fabian Cancellara and Tony Martin, the two immortals, did a little pre-Worlds shadowboxing with the Swiss mega-Champion coming out on top. So apparently the sky is still blue and the sun rises in the east. Really, it's not that complicated. Stand between Cancellara and one of his precious goals and all I can say is, good luck washing out the tire tracks.

Really, it's a devilishly close race. Except for J-Rod. Oh, hello Big Mig. 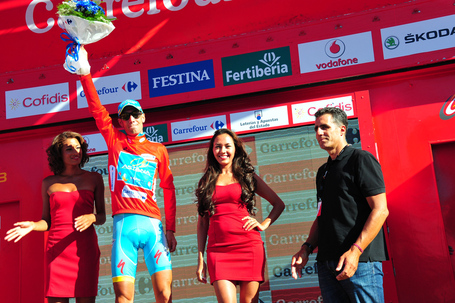 Plain. In Spain. Where it Rains.

The red is the course. The green is an A-route.

Here's how I described it in the Viewers' Guide:

About what you'd expect after three days of climbing and a time trial -- a generally flat stage, though again, this being Spain, there's a cat-3 involved. Shouldn't matter too much, unless for some bizarre reason someone makes it matter. Breakaways will be on the loose, though if any sprinters' teams got left out of the fun of the past five days, they might take up the chase in earnest.

Are any of those jerseys really in play? Let's look briefly at the classifications:

The nearest sprinter is Bling Mathews, at 53. But Valverde has a kick to him, and there's a slight uphill at the line, which maybe helps him move up a place or two? He could easily take the green, if he's willing to stick his beak in the bunch.

Change in this ranking isn't happening. For starters, the only climb is a Cat-3, and anyway there will be a break up the road to take the points, not leaving these GC guys to worry about them.

I'm a little unclear on how this competition works, but I think for Horner to close the gap he either has to win a sprint or be selected as "most stylish rider" on the stage. And with that blue helmet, that ain't happening.

Hm, flat finish, stage of no consequence... when your every instinct is wrong, then the opposite must be right. Chris Horner.