Happy New Year! If you've been pining for road racing, something wonderful is happening in Australia - the beginning of the 2014 season! It's a fortnight of road fun, starting with a competition for the sprinters at the Mitchelton Bay Cycling Classic and then it's the turn of the ITT riders and Classics stars/climbers as the 2014 Australian National Road Championships take place in Ballarat. Tough road racing in the sunshine - doesn't that make you feel better?

Share All sharing options for: The 2014 road season kicks off in Australia with the Bay Crits

The Bay Crits are always a fantastic start to the new year.  Four crit races in three towns around Port Phillip Bay, where we often find the sprint stars of the future, as well as established riders from the Australian and international circuits fighting it out for the stages and the overall prize. It's not just a lot of fun for the racing and the star-spotting, it's also a great chance to see how new iterations of teams are working together.  To give you an idea of it, here's the video recap from last year:

This is the most simple-looking stage, a "hotdog" course, but those corners are tight! 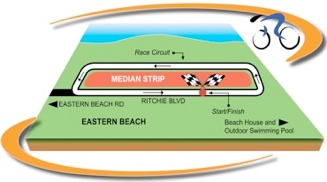 This is the toughest circuit from a course point of view 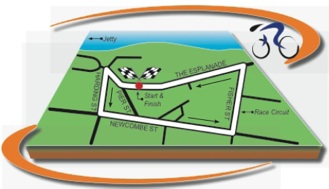 This one's right along the shore, but the corners are treacherous, and riders will be taking last chances for glory.

To follow the race, Cycling Victoria are live tweeting, and the #BayCrits hashtag has a ton of useful information and fun rider tweets.

The teams are limited to five riders each, so some riders aren't racing for their "usual" teams, but for club or Aussie domestic squads.  The official startlist is here, you'll see what I mean.  In the women's, for example, there are privateers who are riding as solo riders - one of the questions is will wider team affiliations come into play?

On the women's side, the biggest teams are both run by Aussies.  ORICA-AIS come in as the team of the defending champions, as Melissa Hoskins won for the last two years in a row, and although Hoskins isn't racing this year, they have track superstar Nettie Edmondson, tactical genius Loes Gunnewijk, super-domestiques Amanda Spratt and Jessie Maclean, and in her first ever race in ORICA colours, Italian attack-queen Valentina Scandolara.

Then there's Wiggle Honda, who have one of the biggest names in sprinting leading their team - three-time World Champion Giorgia Bronzini.  Two of those rainbows were won in sprints on the road, one in the points race on the track, so she has to start as the favourite, on paper at least.  Riding in support are a formidable bunch - Olympic ITT bronze medallist Linda Villumsen, Charlotte Becker, and debut-ing their Wiggle colours, Emilia Fahlin and Peta Mullens.

Some of the riders from those two trade teams will show up elsewhere - ORICA's Shara Gillow, Gracie Elvin and new signing Carlee Taylor are riding for the Jayco team, while Wiggle's owner and manager Rochelle Gilmore, who won the Bay Crits in 2010 and 2011, is riding solo, and Anna Schnitzmeier is in a really fun-looking team made up for the summer, the Dhb DreamTeam, with Italian sprinter Barbara Guarischi, who'll ride for Ale Cipollini this year, Brit Emma Trott (Boels-Dolmans), with Aussies Joanne Tralaggan and 19-year old Jessica Mundy, who had a great 2013 on the Australian domestic circuit, with forays into Europe with the Australian National Team.

But they're not the only teams to watch!  I can't wait to see how gutsy sprinter Chloe Hosking does, riding for her Aussie-summer team Roxsolt with her new Hitec team-mate Lauren Kitchen and Sarah Roy (Vienne Futuroscope), Lucy Martin (Faren Kuota) and winner of the 2013 Canberra Women's Tour, Lisa Antill.  Then there's the Specialized-Securitor team, with Tiffany Cromwell racing with her new Specialized-lululemon teamie Loren Rowney.  Cromwell may be better known as a Classics-type and climber, but damn, she's canny, and she won a Bay Crit stage here last year and in 2011 - while Rowney is a great crit rider, and came 2nd in the Aussie Crit Championships.  And USA-based team Vanderkitten are here!  They're always a LOT of fun!

Other interesting riders?  Beth Duryea, who's been moving from the lululemon's soigneur to a rider in her own right, Nicole Whitburn, who's had a great Aussie 2013, and solo riders like Chloe McConville.

Last year, I think everyone expected ORICA-GreenEDGE to win, but they were frustrated by 18-year old Caleb Ewan, who blasted the race, and went on to be one of the u23 stars, winning Côte Picardie, two stages of the u23 Thüringen Rundfahrt, and three twostages of the Tour de l'Avenir, where he was third overall, ending his season coming fourth in the u23 World Road Championships.  Ewan's signed for ORICA and will start riding for them as a staigiare in August, but he's racing the Bay Crits for Subaru NSWIS, and he'll be fighting all the way.

As for ORICA, they have Matt Goss, Luke Durbridge, Leigh Howard, Micheal Hepburn and Leigh Docker - and look out for Steele Von Hoff, who'll be racing for Garmin in Europe this year.

To follow the race, look for updates and videos, and post anything you see in the comments - here's to fast and safe racing!