Today is a big day in the World Tour, the official launch of what is technically a new team. OK, cynics, it's really just the continuation of something we had already, and which never left. Team Trek/Schleck.

Now rechristened the Trek Factory Racing Team, they are doing their best to make me a big fan. First there was the accommodation of my interview request with their biggest star, Fabian Cancellara. Now, on rollout day, there has already been a team/fans ride around parts of the Flanders course, out of Oudenaarde. You can find videos of the riders and fans humping it up the Koppenberg. And by now, everyone is off to Roubaix for the team presentation. At the velodrome. In a sense, this isn't merely the re-upping of the team, it's the rebranding from Team Schleck to Team Cancellara. Or whatever it is, far be it from a Flanders junkie like me to complain.

Oh and they have a new kit. It's black. I can't seem to find a photo of it besides at CN, so until we get one I'll point you there. I do, however, have a video of my reaction, particularly to the white pinstripes:

Have worse crimes been committed using pinstripes? Sure. And looking like futuristic corporate CEOs won't stop them from being awesome this year. But between those pinstripes, the binary color scheme, and the sleeves and collar which, lacking pinstripes, don't do wonders for the cohesion of it all, I'm not a fan. I might like the bibs OK. Will await more evidence on that. Sporza have some more pics up from today.

Astana, meanwhile, are having their rollout today, or did already, in Brescia, Italy. Their kit is equally hard to locate, but what their website lacks, their twitter feed atones for. Is that how the world works now? Dagnammit. Anyway... 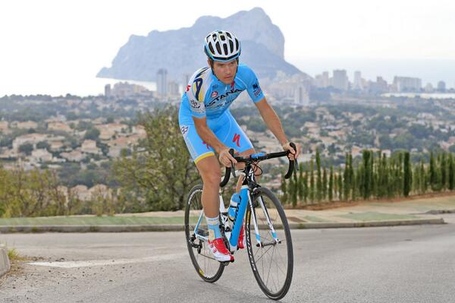 That's Evan Huffman, in a team photo released for his birthday. And so far the best full-kit pic I can find. Some big changes...

I'll give it a 5. I shouldn't be swayed by the incremental improvement over a crappy baseline, but I am. With another espresso in me, I could even go to a 6. Thoughts? Seen any other new kits come out this week?