This year's racing should be closer than it's been in years... at least on the men's side.

With most of the cyclocross bigs located in Europe, it's easy to overlook U.S. Nationals. After all, when was the last time you saw an American in the top five of a Superprestige or World Cup race? Katie Compton has been tearing up all of her competition in Europe, but hardly any male racer has even traveled over to Europe to compete and none have been at the front of the major races. But with an exciting venue and surprisingly balanced field, it's well worth tuning into the races in Boulder this Sunday, especially since there will be free streaming video.

Cross Nationals in some countries are a weekend affair only, or even just one day. But in the United States, we party for five straight days. From Wednesday onwards there are races for almost every amateur age category (aka juniors and umpteen masters categories) on both the men's and women's side and we even have a side helping of collegiate nationals as well. But the weekend is where the main events are with the Men's U-23 race on Saturday followed by Junior Men's 17-18, Elite Women, and Elite Men on Sunday.

You know what's awesome about America? We have parks designed specifically with cyclocross races in mind. Yeah, Belgium may have all the super nuts venues like the Koppenberg, Koksijde, Zonhoven, Druivencross... but here we make do with what we have and add lots of features. Last year the whole world got to see one example - Eva Bandman Park, home of the 2013 World Championships. This year, Nationals happen at a similar venue - Valmont Bike Park in Boulder, CO. What do you need to know about the course? Here's a summary:

Overall, a really fun looking course, one that is balanced between power and technical ability and between short, punchy and long, sustained efforts. But with all the stairs, I kinda think this advantages Tim Johnson just a touch. Want a map, with directions on how to get to the beer garden as fast as possible? Here you go! 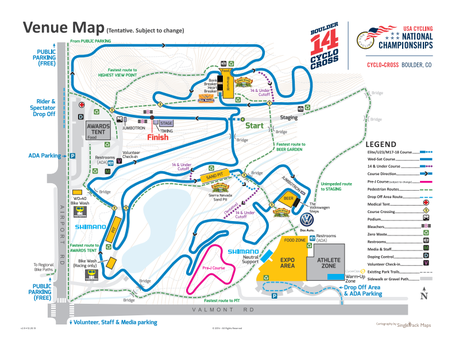 So many men, only one woman?

On the women's side, it hardly seems worth talking about potential winners. Katie Compton is back stateside to defend her 8 consecutive national championship titles. You read me right, eight. After six of seven rounds of the World Cup the overall title is Compton's - she could sit out the last round and still remain unchallenged, such has been her dominance. And when she's gone up against reigning world champion Marianne Vos, she has lost only once out of four times. Unless something goes terribly wrong, she ought to have more stars and stripes for her already full closet by sundown on Sunday.

The battle for second, though, should be a fierce one. Elle Anderson is the newcomer, blasting onto the scene with four straight UCI wins in the early season and solid, if not perfectly consistent, results as the season progressed. Oh, and she nabbed third in the Diegem round of the Superprestige series against most of the world's best (minus Compton and Vos) two weeks ago on a trip to Europe. Battling her will be little Katie Antonneau, who hasn't had stellar results domestically but has notched two top-ten results in the World Cup, including a recent seventh at Namur. She's finished second at Nationals before, in 2012, too. Bonus? She's coached by Katie Compton. Also in the mix are Meredith Miller and Crystal Anthony, both of whom have been consistent top-5 and podium contenders stateside all season.

On the men's side, the race is a lot more open. The list of favorites is long enough, and dark horses make it even more lengthy. Moreover, the course hardly seems to favor any one of the favorites and, should it dry up as it has been so far, tends to produce group racing. So who are our favorites, and why might they win?

Jeremy Powers is your favorite to win. Always a prolific winner - more so than anyone else in the past two years - he has had more trouble with national championships, only taking a title in 2012. But this year his form seems to be trending upwards at the right time. After taking a slower start to the season - winning on the last lap instead of with three to go, that is - he just won his first real mud race (a traditional weakness) a few weeks ago. And unlike everyone else, he's been training in Colorado for two weeks now, getting his body accustomed to the altitude.

But Powers will face stiff competition, headed by Timothy Johnson. The three time national champion has rebounded from two seasons in the wilderness where he at one time garnered the nickname "no win Tim." This year, he's won several UCI C1 level races, usually with a gap nearing or even exceeding a minute. The course's frequent dismounts and remounts play to his technical strengths. Ryan Trebon and Jonathan Page are also strong threats to win and are old hands at winning nationals with two and four titles respectively. Wins have been scarce for Trebon this season, but he's always been near the top. He only knows one way to race - hard - and will be best suited if the course is heavy with mud from the melting snow that fell early in the week. Page is the same - after spending his season in Europe, racing behind the front group, he has one speed - hard. He needs a tough course too, and it's unsure that this year's is what he needs, especially with the ground seeming to dry out as the sun shines.