And the kits just keep on coming.....

More kit-reveals today plus a HUGE SECRET REVEALED......... Argos-Shimano will from now on be known as Giant -Shimano. Who saw that coming?!

Share All sharing options for: And the kits just keep on coming.....

First off a Pro Conti team that pulls off the best kit of the year as far as I'm concerned. Swiss IAM Cycling hired Chavanel to get into the Tour de France but they really should get in on fashion sense alone with the revised kit for this year. 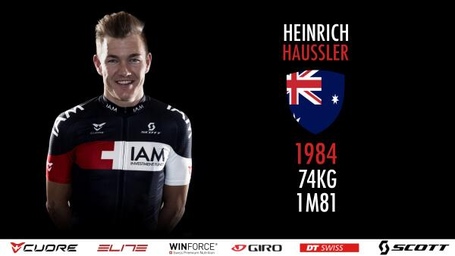 If it hadn't been so profoundly unsexy to wear kit that says "Investment Bank" I'd be online purchasing right now. But really, these guys should be the ones with pinstripes on their kit if anyone.

On to the "kit that Marianne Vos will never be seen wearing since she's always the champion of some damn thing", the kit of Rabobank-Liv Womens Team. This is a pretty original concept with an image rather than a graphic pattern. Color and style bring back memories of early 2000s Rabo jerseys. Lets hope that's all it brings back. Here's Iris Slappendel (a jersey-designer herself) modeling the jersey: 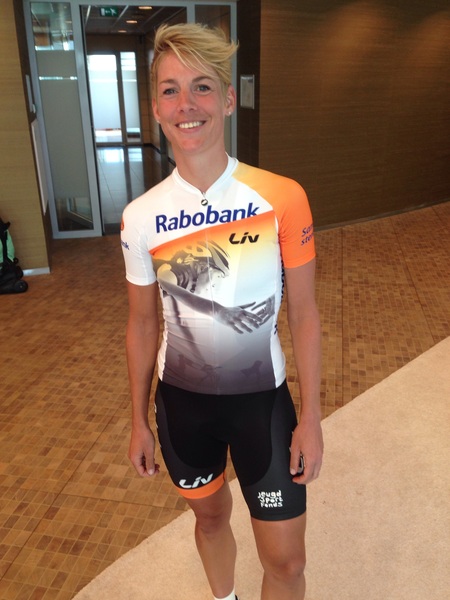 Then there's the re-branded Giant-Shimano where Giant are stepping in for 3 years to fill in for the big US sponsor that apparently bailed on their already agreed deal sometime in December. 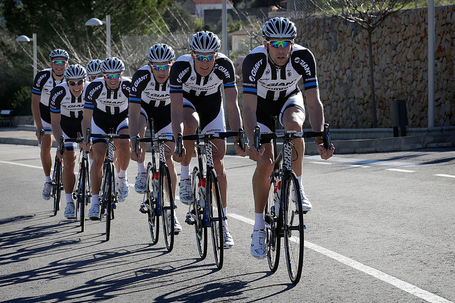 This feels like a slightly less dull version of the kit that Blanco had last spring. Giant, lovely saver of teams they might be, are not the most daring of kit designers. But nevermind, these guys are funding a WT team, a women's team and a development Conti team so they could pretty much ride around in nothing but polkadot underwear and would still be applaudable.

And last but not least there's the new Orica kit that came out a few days ago. Both men and women will be showing off in this creation from new sponsor Craft this year: 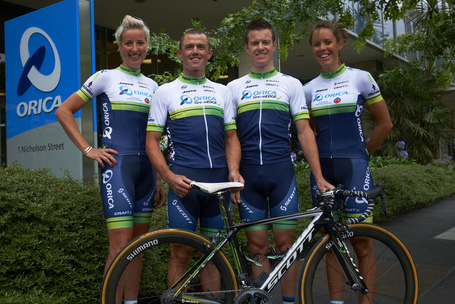 Except Gerrans and Gracie Elvin of course who just did the one race in it before they put in orders for new fancy national champs kit in green and gold (or "yellow" as it's known in the rest of the world).
It's a standard Craft kit, stylish, a little on the dull side. Nice colors though.