The kids are alright: U23 worlds contenders

These are the youngsters that you'll be betting on in five years time - if you're the betting type at least. The U23 race Sunday morning, Dutch time. And the prime suspect is racing on home soil.

Share All sharing options for: The kids are alright: U23 worlds contenders

The biggest talent in cyclocross is definitely little Mathieu van der Poel. Kid's only 19 as of two weeks ago, and he's the current junior world champion. He's in his first year as a U23, but he's still kinda kicking ass in his age category. The Dutchie who was born in Belgium is the grandson of Raymond Poulidor and the son of Adrie van der Poel, which is pretty good pedigree. Also, the venue in Hoogerheide was designed by... Adrie himself. Can't hurt, though Mathieu says "Hoogerheide isn't my favourite race." Still, he's the BIG favourite for Sunday's early race.

Weatherwise, Mathieu will hope for dryness. Cause, you know, kid's also the current road world champion. Yeah, he's got skill.

PS - Mathieu has a website that - on firefox at least - shows you nothing but a gif of him winning.
PPS - the cycling archives website already has him down as winner of Hoogerheide '14.
PPPS - Want to hear him... let's call it rap. Here's the official Hoogerheide theme song. Mathieu's voice is the first one you hear.
PPPPS - God that's a horrible song. 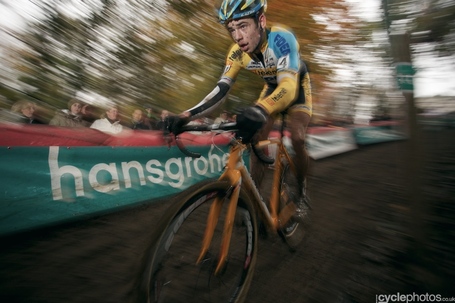 Wout, Wout, Wout. No matter how swell his season has been, it'll be remembered mostly forhis national champs antics. Unless he wins the rainbows. So, that's motivation for you.

At the Belgian nationals, Wout Van Aert started before the lights had turned green, which obviously isn't allowed. He was promptly disqualified, but then the jury forgot their backbone and started asking all the riders whether they'd mind if Wout rode along anyway. Seeing that Van Aert was the big favourite for the title, they kinda did mind. So Van Aert was barred from the race. In all the chaos he found a gap though, and he jumped on his bike and raced after the peloton which was already a ways away. Van Aert rode like a madman on a mission and caught up, but was taken out of the race at the end of the first lap anyway.

Wout's on a good streak in 2014 - winning Nommay, Otegem - a mixed U23 / elite race the day after the nationals, he beat KVT and Rob Peeters - and Baal, plus coming second in Rome. Weatherwise, Wout is hoping for mud. He'll also be out to prove himself, cause he always gets annoyed that Belgian press thinks Mathieu VDP is more talented than he is. (thing is, as talented as Wout is, Mathieu is better. Sorry Wout. Doesn't mean you can't beat him on Sunday).

On 1 January, Wout van Aert ditched the Fidea team that raised him and went Vastgoedservice instead.

PS - the cycling archives website already has him down as silver medallist of Hoogerheide '14. 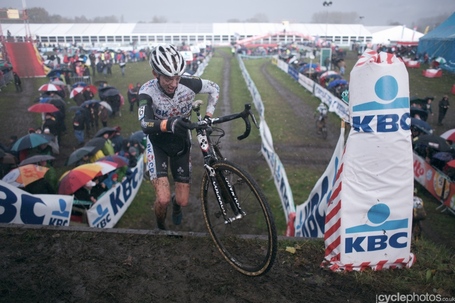 Just when you think we must be out of Vanthourenhouts, they find another one in a drawer somewhere. Michaël's the brother of Dieter and the cousin of Sven, so he's got some role models. Michaël tends to win more though, so he gets first cake slice pick at family Christmas. After grandma of course.

MVT is the current European champion - a race that doesn't exist for the elite men. It was kind of a surprise that he won. Cause van der Poel was also there. Mathieu was ahead for most of the race too, but was caught and eventually beaten by Vanthourenhout. Something about a fat lady goes here. That seems to be Michaël's modus operandus: he doesn't win too often, but he does regularly win big. And he doesn't let go.

On 1 January, MVT ditched the BKCP team that raised him and went Sunweb instead.

- Mike Teunissen (Nl) Current U23 world champion. He's not had the greatest season, though he did win Zonhoven. Also, he was tenth in the young Omloop, which I can appreciate.

- The entire Belgian selection pretty much - though not all for the win of course. We're talking Gianni Vermeersch (bronze medal subscription), Laurens Sweeck (the cycling archives website already has him down as bronze medallist of Hoogerheide '14), Jens Adams (current Belgian champion) and Toon Aerts.

- And for the 'mericans: Logan Owen. Current national U23 champion, and third on home soil in the junior category in Louisville. Don't really know too much about him.