It's time for the sixth round of the World Cup, and that means heading to another rare race in somewhere that's not Belgium. It's off to Italy for a fast, twisty course.

Phew. The Kerstperiode is over, that frenetic one and a half weeks of almost daily races over the holiday season. And now, after a mere four or five days of rest, it's time to start the racing again, and it's no small deal either. Sunday is the penultimate round of the World Cup and helps highlight the internationalization of cyclocross, happening in the cross hotspot of... Italy. It's time to leave that Belgian mud behind for something a little faster and a few names you haven't seen in the past weeks.

What's our course like? It's not very Belgian, to say the least. Lots of twisty with a few good long power sections, a combination of speed and acceleration. In the dry, it's a perfect course for Lars van der Haar and the sort of track that makes traditionalists from up north groan and shake their head, bemoaning the fast World Cup courses that help break the normal Belgian stronghold on the podium. But with 2-3cm of rain predicted overnight and through the day tomorrow, things should get a little greasy, though without any substantial rain earlier in the week a mud bog shouldn't be on the agenda. Instead, expect fast but with occasional mistakes. Ian Field tweeted earlier today that even with "100 dead turns a run and slippery conditions" he did a lap in training today at over 30kph. That's even faster than Zolder was, folks. So who should you keep an eye out for? Van der Haar for sure, and also Philipp Walsleben, who has fared well in the world cups and especially the fast ones, and Kevin Pauwels. Sven Nys has been on a tear recently, but sitting far back in the World Cup standings and racing a track that does not play to his strengths may make him less than motivated to perform at his highest level. Over on the women's side, it should be a solid battle between Marianne Vos - who excels on courses like this - and Katie Compton. Since the World Championships is on a fast (but less turny and more technical) course, this may be a good preview of what to expect in a month's time. 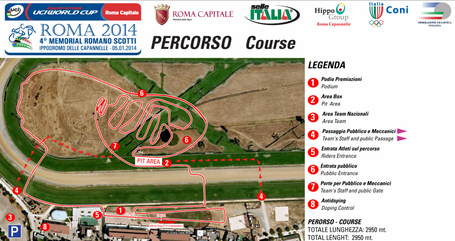 Want video from last year? We got that too!

As far as the World Cup standings go, things seem wrapped up even with two races to go. On the women's side, this is definitely true - as long as Katie Compton finishes near rival Nikki Harris this weekend, she can sit out the last round of the World Cup and still take home the leader's jersey. Now that's what you call dominance! On the men's side, things are less lopsided, but Lars van der Holeshot Haar leads Philipp Walsleben by a still sizable 33 points. For those math people among you, the points differential between first and sixth is 30 points. and the differentials between placings only grow smaller as they go down the results. Barring disaster, van der Haar should hold onto that white skinsuit for at least one more race.

Women race at 13:30 CET and men at 15:00. For nearly every country save the United States, live coverage will be available here on the UCI's Youtube page. For those in the US, don't worry - it's possible to get around that georestriction with Hola and few other programs. Check in the livethread tomorrow if you need help.