A Tale of Mud and Horses - Belgian nationals preview

The black-yellow-red of the Belgian national cyclocross jersey, oftentimes considered to be even a notch above the world champs kit (at the worlds, you 'only' have to beat eight other Belgians) might change shoulders on Sunday. The peloton will race in Waregem, on the hippodrome, on a brand new race circuit.

Share All sharing options for: A Tale of Mud and Horses - Belgian nationals preview

The fellows over at cyclocross.info where kind enough to go ride around the track for us, you can watch from their perspective here. Synopsis: it's not the hardest race we've ever seen and the obstacles are all man-made, but hey, at least they've predicted rain. The obstacles:

When I say Irish bank I don't mean the broke monetary kind, but the sandy-bit-by-the-river kind. Sadly, there is no river on the track and there's no sand on this bank. The name is all wrong, actually. The Irish bank is a steep slanted hill, which they go up and then down again. Next it's over one of what seems like 454 bridges, after which they shuffle through a small stream. Not much of an obstacle per se, but enough to trip you up. Holeshot is after a 180° turn.

A BMX-like jumpy wall that would make Styby airjump for joy, another bridge and a patch of grass that's suffered from the rain all lead up to... sand! Not very deep though, so it shouldn't hinder the bigs.

Bridge, grass, stairs, more grass, a bridge after a 180° turn, THE BEAMS, more grass, the small stream and then The Gaverbeek, another stream to jump over. Wider than the earlier one. More grass, and then up and down a slanted hill like the Irish one we had in the beginning. Then the final bridge, and that's pretty much the last obstacle before the finish - cross it first and you can nearly start lifting your arms over your head.

Overall impression: flat grass - which will hopefully become tricky sticky mud by Sunday - a gazillion corners and a handful of bridges. Also, stairs. That's all I can give you without having seen an actual race on it. 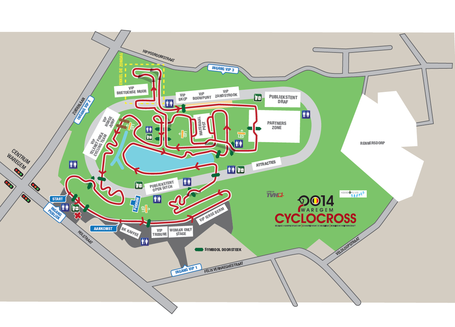