For all of those who manage to keep the interest up and not succumb to the false siren call of too early cyclocross there is a big gem of a race on offer on Sunday. Il Lombardia, the big fall event in Italy, this year with a brand new and titillating course, a course perhaps as taylor-made for our new World Champion Michal Kwiatkowski who will premiere his new kit this weekend.

Share All sharing options for: A golden new Il Lombardia?

Much like San Sebastian, Lombardia is a race that boasts a fantastic startlist but is hard to assess since it is so tricky to make a guess who will be riding at full power and who is riding on fumes after a long season. Just a week after Worlds riders should be still on a high but in reality for many finishing the Worlds course is like popping a balloon and whatever comes after that is just going to the motions until they can go on a much anticipated rest. So trying to pinpoint what kind of race we're going to get is damned near impossible. That said, this year looks more promising than ever.

Starting with the course, RCS have gone for a dramatic makeover this year. Out is the brutal steep Muro di Sormanno from the finale and the iconic Ghisallo has been moved to the early part of the race. The Sormanno was an attempt to follow the trend of races establishing a signature monster-climb but it never felt like a magic race-maker in the two editions we saw. Moving the Ghisallo and missing out on the ringing of the bells is sad of course but if it opens up new options for the finale then so be it. What isn't new is an endlessly hilly course which makes this the climbiest of the Monuments next to Liege-Bastogne-Liege. If it wasn't we probably wouldn't see guys like Contador, Pinot and Aru lining up and it is good to see that we have classics that attract even the purest climbers/stageracers. The finale this year will consist of three major climbs in the final 100 km, the Gallo, Ganda and Berbenno all of these should soften riders up and create a selection before the race enters Bergamo and the short sharp climb up to the old town Bergamo Alta and then a fast three km drop to the finish. 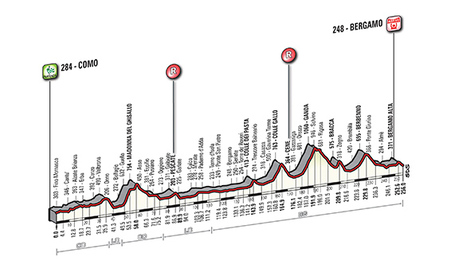 As with all new courses the proof is in the pudding of course but it looks like a potentially thrilling finale with opportunities for playing the long game from the Berbenno climb as well as for explosive moves in Bergamo both on the climb and descent. In fact that final winding climb with varying steep and shallower ramps could well prove to be one of the most spectacular finishes in any of the big one-day races especially since it's followed by an insane fast descent and a flat final kilometer where anyone with a small gap could see himself facing a heartbreaking defeat. In fact, this kinda looks like a Ponferrada finale on steroids, the climb is tougher, the descent more technical and challenging so we could see the same people in the mix but not necessarily with the same power-balance. Kwiatkowski should stand a decent chance of repeating Bettini's feat of winning Lombardia wearing his fresh rainbow stripes though, in fact he looks like the standout favorite if the post-Worlds party hasn't been too rough.

Going up against him is a field that pretty much looks like a Tour de France startlist. Contador and Valverde are both here to do battle for the World Tour title, surely the most prestigious prize in all of cycling...... well maybe not but still worth the effort for the teams. Naturally the two have followed the infected Podiumcafe "Rider of the year"-debate as well and have vowed to do their part to put the controversy to rest and we thank them for it. On the road of course Valverde looks the most interesting, the finish is perfect for him and Contador's one-day record is......underwhelming, but props to him for actually racing the races that could potentially suit him.

Beyond those two you can rattle off a long list of names that looked hot in Ponferrada and should be up there in the finale. The winner of the last two editions, Joaquim Rodriguez of course. He might be he one mourning the Sormanno most of all but on the other hand this course should suit him just as well. His problem is probably that he isn't as hot as he has been in years past but then again the whole of Katusha where on fire in Milano-Torino. Then there's Romain Bardet, Bauke Mollema, Alessandro Di Marchi, Dan Martin, Rui Costa, Tony Gallopin, Rigo Uran, Michel Albasini, Warren Barguil, Tom Dumoulin, Roman Kreuziger and a bunch more. You see the trend? It's a stacked field. Question is really who wants it? Who still has the drive to suffer a 250km race at this point? 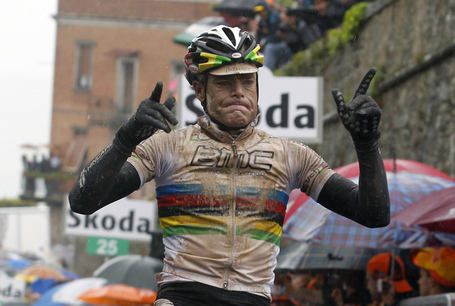 A special mention should perhaps go to two riders who are doing their last races this weekend. Cadel Evans will do some racing in Australia before he retires but this will be his last race in Europe. Cadel has oddly never featured in Il Lombardia, probably more due to the fact that he has been winding down by this time than anything else. The type of course should have suited him perfectly but in some things timing is everything. The other retiree is IAM's Thomas Löfkvist who is stepping away after a disappointing last few seasons and problems with overtraining. Löfkvist's best career results came in Italy and it is fitting that his career finale comes here after 11 seasons as a professional. Wins in Strade Bianche, Tour Mediterranean and six days in the Giro's Maglia Rosa will stand out as his biggest wins in a career that promised a lot more.

Personally I see a podium with Valverde, Dan Martin and Dani Moreno in some order on Sunday. Valverde is a no-brainer of course. Martin never got to show his form in Ponferrada and my bet is he takes his revenge here. Moreno tends to overshadow J-Rod every now and then and I could see the Bergamo Alta climb suiting him a lot better. Also expect notable performances from Aru, Alexis Vuillermoz , Warren Barguil and Tony Gallopin. J-Rod and Contador? Nah, not this time.